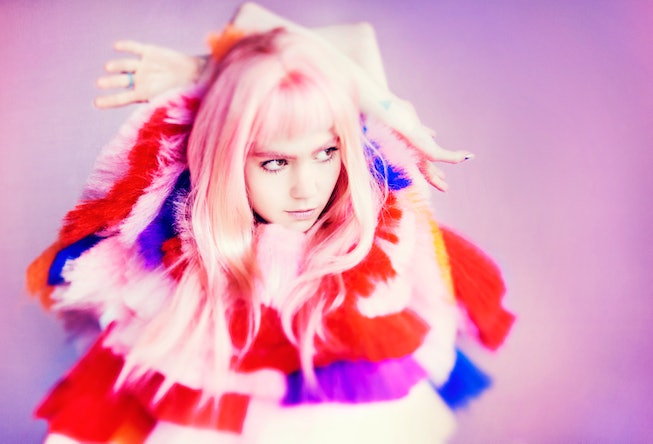 If you can believe it, on Jan. 31 it will have been 10 years since Grimes released her breakthrough album, Visions. The 13-track album — which she famously recorded in three weeks on GarageBand, and includes the hits “Oblivion” and “Genesis” — was a marvel of pop experimentation, and has been critically cemented as a landmark project ever since.

Now, a decade later and just in time for its anniversary, Visions is getting a coveted vinyl re-issue on Vinyl Me, Please, available for order now. The newest edition disc will be pressed on 180g Magenta and Green Galaxy vinyl, and include an exclusive art print, as well as track-by-track linear notes and illustrations by Grimes herself.

For an example of the cheeky commentary in store for those lucky purchasers, here’s an excerpt of what Grimes writes about the album’s opening song, “Infinite Love without Fulfillment”:

“Wow, i can hear myself learning how to make music in this song. I remember doing the vocal over the drums and then randomly trying that baseline and being like whoa! And kinda spiraling into this experiment.”

And here’s what she says about “Eight”:

“At the time when i was making Visions, i was most proud of this song. Honestly i think it’s kind of underrated — still personally one of my favourites. I was jubilantly experimenting, and i can really feel my pure joy and excitement in this. I remember just loving making this song and thinking ‘wow nothing sounds like this, this is new!’ I still feel like this song doesn't sound like anything that exists, and i’m proud of that.”

Grimes is currently prepping the release of her anticipated sixth studio album Book 1, which she’s teased in interviews to be a “lesbian space opera,” and for which she still hasn’t confirmed the release date. She recently shared the single “Player Of Games,” a tranced-out jam with an equally wicked music video.

In honor of the reissue, Vinyl Me, Please will also be making Visions its Essential Record of the Month for February. See the vinyl tracklist below, and purchase your own copy here.