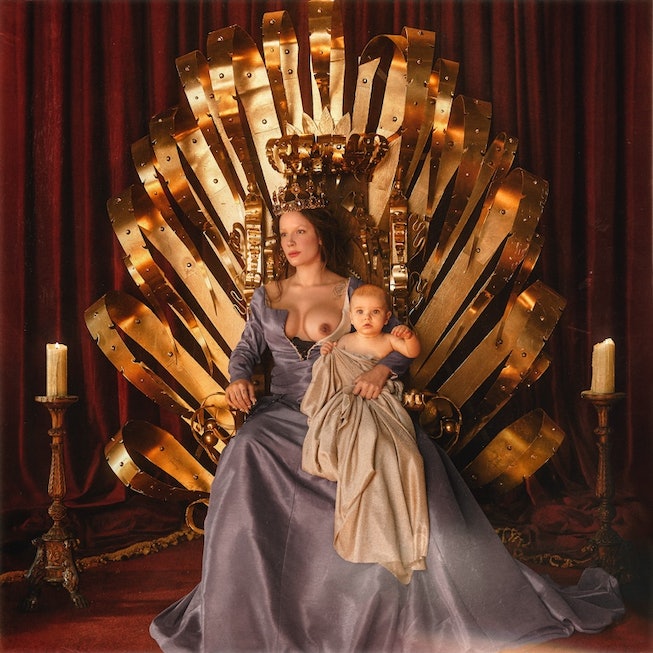 Halsey’s fourth studio album, If I Can’t Have Love I Want Power, arrived on Friday with no pre-released singles. In an unconventional rollout choice for a big pop project these days, the first taste the general public got of the highly-anticipated album was on release day, when it quickly became obvious that the 13-track-project wouldn’t be like any of the music they’ve released previously.

Over a seething, spitting soundscape of gothic industrial rock crafted by Nine Inch Nails duo and film scorers Trent Reznor and Atticus Ross, Halsey (who goes by she/they pronouns which we use interchangingly, here) crafts a compelling concept album about love, sex and pregnancy, while complicating the portrait of womanhood in the process. Written in the throes of being pregnant with their child, the album is about her journey to becoming a mother, and all the societal baggage that comes with it. Nowhere is that messaging and their point more clear than in the lyrics of “I am not a woman, I’m a god,” the album’s lead single and thematic core.

The third to last track on the record, “I am not a woman, I’m a god” puts the overarching concept of the album into sharp focus. While the sentiment of its title may betray you into think it’s aligned with Ariana Grande’s plush sex-centered anthem “God Is A Woman,” Halsey’s lyrics offer a more intense and philosophical meditation on the fraught relationship between godliness and womanhood — and, really, any body with the ability to give birth. Over a buzzing, shuffling beat dotted with classical flourishes, Halsey sings opaquely about having a “a smile where my frown goes” and skeletons buried in her yard, but the song’s chorus is where their writing shines the clearest.

“I am not a woman, I’m a god/ I am not a martyr, I’m a problem/ I am not a legend, I’m a fraud,” they sing, using terms that have historically been ascribed to problematic and significant women throughout history. It’s a gesture towards the Madonna-Whore complex — a concept coined by Freud in which women are seen as either pure, godly Madonna figures or sexually corrupted whores — which has been on Halsey’s mind, as of late. They references it in a recent interview with Apple Music’s Zane Lowe, saying explicitly that that dichotomy is “actually kind of what the record is about.”

“Socially, we’ve been reduced to two categories, you are the Madonna or the whore,” she told Lowe. “So if you are sexually desirable or like a sexual being, you’re unfit for motherhood. You could never be someone’s mom. But the second you are motherly or maternal and somebody does want you for their mother or their wife, you’re unf*ckable.”

They play with the complex visually in the music video for “I am not a woman, I’m a god,” which depicts Halsey at both ends of the spectrum: as a nude, bathing godlike figure and a powerful, cold-hearted ruler, and the banished, tattered white dress wearing-pregnant woman who may or may not get burned at the stake.

If this all sounds very intense, it’s meant to. “The reason that the album is sort of this horror theme, you know what I mean, is because [pregnancy] in a way has its horrors,” she told Zane Lowe. “And I think everyone who has heard me yearn for motherhood and yearn for this for so long, would have expected me to write the album that was full of gratitude.”

For Halsey, pregnancy brought joy and also violence and horrors, wrought on her via her own thoughts and fears, societal expectations, and outside spectators. A lot of If I Can’t Have Love, I Want Power is Halsey playing into and off of those expectations from others and herself, in a tongue-in-cheek but also very real way. Their lyrics gain even more meaning when considering that pregnancy is what prompted an interrogation of their own gender identity. As they sing on “Bells of Santa Fe” about being a woman: “who the fuck would choose this?” Their portrait of womanhood, at least how its historically been regarded in society, is not one for the faint-hearted.

“Everyone's like, ‘Oh, it's like this is a girl power album,’ and I'm like, ‘No, it's not,’” she asserted. “The lead single is ‘I am not a woman, I’m a god,’ it's not a girl power album. From jump, I'm like, ‘I'm not a woman.’ [...] Being pregnant, writing this album, people are expecting girlishness, you know what I mean? And any time where I ever talk about womanhood, motherhood, femininity, I'm usually talking about it with a taste in my mouth, you know what I mean? Like go be a big girl, a girl is a gun, all I can taste is the blood in my mouth.”

Halsey’s If I Can’t Have Love, I Want Power is out now.

NEXT UP
Entertainment
On "Flowers," Miley Cyrus Is Still In The Throes Of Moving On
Entertainment
Gracie Abrams & Gia Coppola On The Joy Of Free-Flowing Collaboration
Entertainment
Bad Bunny, Lizzo, Kim Petras Will Perform At The 2023 Grammys
Entertainment
Brendon Urie Officially Disbands Panic! At The Disco
Style + Culture, delivered straight to your inbox.