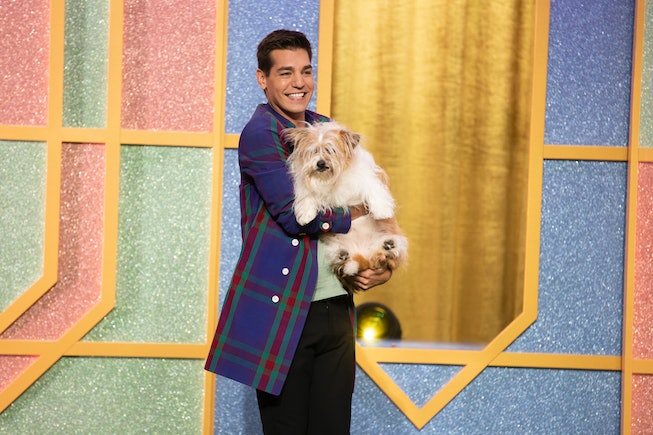 Several months ago, as my roommate and I got used to spending hours upon hours together indoors, we both decided that our only solution for boredom and general malaise was to get a puppy. Unfortunately, we never ended up doing that, and now, we're moving. But at least HBO Max is granting us our necessary dosage of cute dogs with its new reality competition series Haute Dog, which pits professional dog groomers against each other to duke it out and earn the title of "Best In Show" (plus $10,000 and a first-place rosette). Ahead of its premiere this Thursday, Haute Dog just received its official trailer.

Hosted by Las Culturistas podcaster Matt Rogers and judged by A Black Lady Sketch Show creator Robin Thede and dog grooming expert Jess Rona, Haute Dog looks like any dog-lover's dream. Featuring pooches of all breeds — both big and small — the new competition series promises to show off the superior house pet in ways you've never seen before. Whether they are crowned with tiaras or dyed in neon-rainbow leopard print (don't tell PETA), these haute dogs are all fashion-forward and clearly ready for their closeups.

Like the long-running Chopped or Netflix's Emmy-nominated Nailed It!, each episode of Haute Dog has a hard reset, starting with three new dog groomers that will compete head-to-head over two rounds, with one unlucky groomer being eliminated after each one. In the end, the last groomer standing will be declared "Best In Show" — an apt title for "turning their K-9s into K-10s." Judging from the trailer, we can expect puppy puns, lots of glitter, Matt Rogers in very bright suits, and... dog cleavage?

Check out the trailer below. Haute Dog premieres on HBO Max this Thursday, September 24.