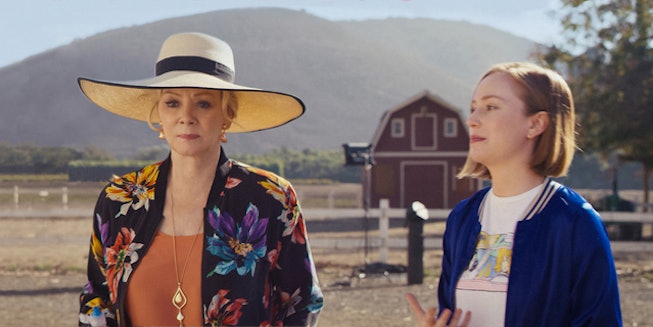 In the midst of its first season last summer, HBO Max’s Emmy-winning hit Hacks was quickly renewed for season two, and for good reason. The comedy has drawn critical and commercial acclaim alike for its smart writing and dynamic performances from an ensemble cast, and especially its stars: Emmy-winning legend Jean Smart and newcomer Hannah Einbinder. Here’s everything we know about season two of Hacks so far:

The first trailer for season 2 of Hacks picks up where we left off.

HBO Max dropped the official trailer for season 2 on Tuesday, April 27th. Picking up after stand-up legend Deborah Vance (Smart) has lost her Las Vegas residency, she and her reluctant writing assistant, the young comedian Ava (Einbinder), who takes the gig after being canceled on Twitter, take a cross country road trip together to workshop Vance’s new act.

Hacks season 2 premieres on HBO Max in May.

Hacks premieres on the streamer May 12 with two episodes, followed by two more each week until June 2.

Hacks quickly became a hit upon the release of its first season.

Co-creators and showrunners Paul W. Downs, Lucia Aniello, and Jen Statsky said, "We have been blown away by the positive reception to Hacks — we owe this renewal to every single person who tuned into the show and then told a friend to watch. Many years ago, we set out to tell a deeply important story that needed to be told — that of a handsome, charming talent manager and his two demanding female clients. We're so glad that story resonated with audiences, and we can't wait to get to work on season two.”

The cast of Hacks season 2 will include even more comedians.

Part of what makes Hacks so great is the energy brought by each character, from Meg Stalter’s scene-stealing turn as a nepotism baby to Mark Indelicato’s portrayal of Damien, Vance’s dead-panning assistant.

NEXT UP
Culture
Phoebe Dynevor Will Not Return for Bridgerton Season 3
Culture
Succession Season 4 Trailer Explodes With Family Drama
Culture
Netflix Is Seriously Cracking Down On Sharing Passwords
culture
Anna Delvey Is Getting A Reality TV Show
Style + Culture, delivered straight to your inbox.