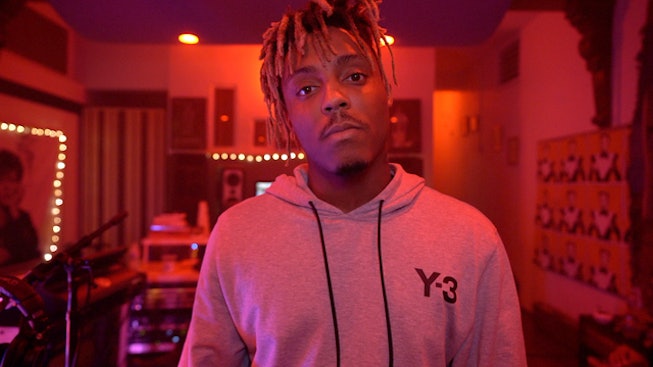 Photograph by Courtesy of HBO

HBO’s newest addition to its Music Box series, Juice WRLD: Into The Abyss, is many things. At first glance, it’s just another documentary. With a closer look, it’s a celebration of pure talent. Inspect it from another angle, and you’ll find a cautionary tale — a coming-of-age gone wrong, of sorts, in which the star of the show never gets to finish his journey.

Over the course of an hour and fifty minutes, director Tommy Oliver (40 Years A Prisoner) shines a light on the quick rise and fall of the rapper, who died of an accidental overdose in 2019, less than a week after his 21st birthday. Born Jarad Anthony Higgins in Chicago, Illinois, Juice WRLD began pursuing music in high school. He uploaded his first song to Soundcloud in 2015, and by 2019 had become a global sensation. With three albums out and a myriad of chart topping hits, including 2018’s industry-influencing “Lucid Dreams,” Juice was a mega-star with a bright future.

“He was a musical genius,” Oliver says over Zoom. “He was a musical prodigy,” he then clarifies. Juice’s ability to freestyle and capture complex emotions within catchy songs, is what cemented his spot in Hollywood. “Whether he knew it or not, Juice was a therapist for millions of kids,” says record producer, and friend, Benny Blanco, in the film.

Juice frequently rapped about battling depression and anxiety, however, his message and harrowing cries for help were often overshadowed by their genius delivery. Throughout the course of his career, Juice provided a voice to those who couldn’t find the words, but he was left without healthy coping mechanisms of his own.

Into The Abyss, streaming now on HBO Max, shows what happened in Juice’s world behind closed doors. In a way, Oliver invites fans to be a part of Juice’s entourage — providing an unfiltered look at the glamour of it all, while the shadow of substance-abuse lingers slightly out of frame. According to Oliver, the story you get depends on how you watch it. From my seat, it’s of a struggling, yet brilliant, artist who’s impact on society will last for years to come.

Read on for Oliver’s conversation with NYLON about crafting the documentary, Juice’s “star quality,” and speculation concerning the police’s involvement in the rapper’s death.

How were you introduced to Juice WRLD's music?

Ski Mask (a friend of Juice) talks about it at the end of the film. He’s like, “Ya’ll probably just started hearing Juice and you don’t know what you started liking him from.” That’s what it was. I just heard his music, and I didn’t know much about him. His music just started popping up everywhere, and that’s how it started for me.

Did you have the opportunity to meet him before he passed?

How did you pull all the footage together?

I got handed a hard-drive with the footage from Chris Long and Steve Cannon who were shooting Juice for the last, maybe 18 months of his life.

Was the footage originally intended to make a concert video?

Something like that. Maybe it would be a vlog, maybe it would be used for music videos. Maybe there would be some kind of doc something, but it definitely wasn’t intended to be this.

My whole thing [while creating the documentary] was that I wanted to be able to facilitate his voice and his story with as limited distractions as possible. So it’s him, and who he was, and what he went through, from his perspective. Not my perspective on it. Not some journalists’ who’s coming in and telling you how to feel. It’s just him.

What kind of story did you want to tell? Do you think you succeeded in doing so?

The only story I wanted to tell was the story of him, and what he went through, accurately, in a way that his mother would be happy with as well. I grew up with a mother who was addicted to drugs, and I know what that feels like. For us, he’s Juice WRLD, for her, he’s Jarad. So I just wanted to make sure that I could tell the story accurately and that we could see him for who he was, while providing context for what was going on.

There’s a quote from the film that really stuck with me. One of Juice’s friends says, “he was so good at articulating his feelings, we didn’t even realize that’s the way he was feeling.” It felt like the documentary’s structure mirrored that sentiment. Was that intentional?

There’s also a ton of subtext that people can choose to see, or not. There’s a version of the film where you can watch it, just sitting back the whole time. And there’s a version where you lean forward and you’re listening, and you see those small things that contribute so much more to our understanding of him and his journey.

It’s likely the documentary’s premiere will spark a discussion about mental health and addiction, especially within the Black community. What do you want this film to contribute to the conversation?

For Juice, what he says in the doc is that, “Look, maybe I’m not the change, but maybe I can be part of the change, or contribute to a chain reaction, so after me it’ll continue.” I think it’s a conversation that should happen, and it’s something that we need to do better at.

Seeing that Juice has such an expansive, and protective fanbase, how did you navigate crafting his image without his direct-involvement?

Did that influence your decision to only include interviews at the beginning and end of the film?

100%. I wanted it to be his story in his words. Once I knew it was possible to do, there was no other option for me. I wanted to basically get out of the way, so you could learn about him and his journey from him. Not from me, not from somebody else, but from him.

Though not explicitly stated, there’s some speculation in the doc about the police’s involvement in Juice’s passing. It reminded me of the criminalization of drug-use and the ongoing battles Black people face with law enforcement. What are your thoughts on the matter?

Unfortunately I’ve had far more negative interactions with police officers than positive ones. As someone who grew up in the hood, in Philly, [there were] situations where I’d done absolutely nothing wrong, yet the default seems to be not to de-escalate. I don’t know, I wasn’t there — and Chris, his cousin, was the person who said that — but it’s also something that feels entirely plausible.

In a big way, so much of what I’ve done in my career has tried to make sure that we can be seen accurately as people. With all of what that means, as complex, whole individuals, with families and wants and desires.

Without that, it’s easy to dismiss us. It’s easy to justify not doing something because all you see is a caricature or the two dimensional representation. I think that it’s all messy and complicated and I don’t have a succinct answer to it, but it’s something that I hope will get better.

I think one of the most interesting things about Juice’s story is how quickly he rose to fame. Throughout the film that’s attributed to his lyricism and charm, but what do you think gave him that “star-quality.”

How do you think Juice changed the industry, and what is his lasting impact?

His legacy will also just be, [that] he made incredible music in a way that was unheard of and was a good person while doing it. His fame and success didn’t actually change that.