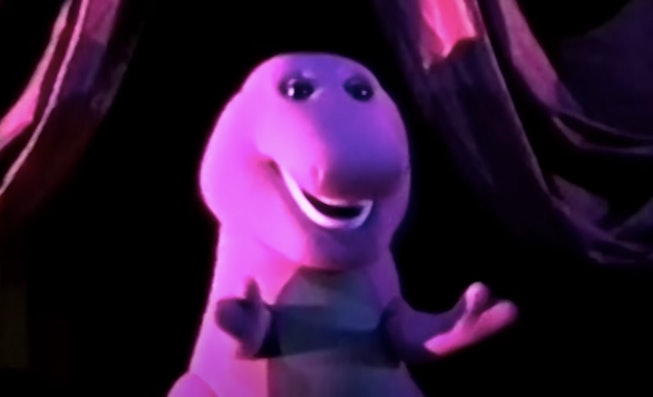 The trailer for I Love You, You Hate Me has arrived and it explores the dark side of the children’s show Barney and Friends.

If you grew up in the ‘90s, or even if you didn’t, odds are, you’re familiar with the jolly purple and green dinosaur who preached love and kindness on PBS. The series began in 1992 and ran until 2015, growing wildly popular along the way. But, with great success came a dark underbelly of hatred for the character as well. Peacock’s upcoming documentary, I Love You, You Hate Me, explores the dangerous aspect of the TV show, as told by previous actors who played Barney and others who worked on set.

“Barney stands for inclusion, acceptance,” said the former voice of Barney, Bob West, in the documentary trailer. Somehow though, that message didn’t resonate with all of the show's viewers. Former employees recalled getting hate mail, death threats, and enduring constant harassment while the show aired. “They were violent and explicit [threats about] death and dismemberment of my family,” West recalled. “They were gonna come and find me, and they were going to kill me.”

Barney and Friends was created by Sheryl Leach, who made the series to spread positivity. As Ben Nye notes in the trailer, the character was meant to embody joy “What color is happier than purple? No color,” he said. Those who hated the show derailed her mission, by spreading hateful narratives about the men who portrayed Barney. “As her beloved character was heading into the stratosphere, people couldn’t accept that this was just a show,” said David Joyner, who played Barney from 1991 to 2001. “And so, let the bashing begin.”

One person in the trailer recalled a rumor that Barney “hid drugs in his tail.” The director of the film, Tommy Avallone, released a statement admitting to hating Barney in the past as well. “Barney came out on television when I was just 10 years old, and I admittedly didn’t understand him,” he said. “As a teenager, for one of my birthdays, I asked my aunt to make me a Barney costume, so my friends and I could beat him up on camera.”

“Several years later, creating this docuseries, it feels good to be on the other side and no longer a Barney hater. Now having children of my own, I understand all the love that went into making the purple dinosaur.”

I Love You, You Hate Me is a two-part series. The documentary premieres on October 12th. Until then, check out the trailer below.