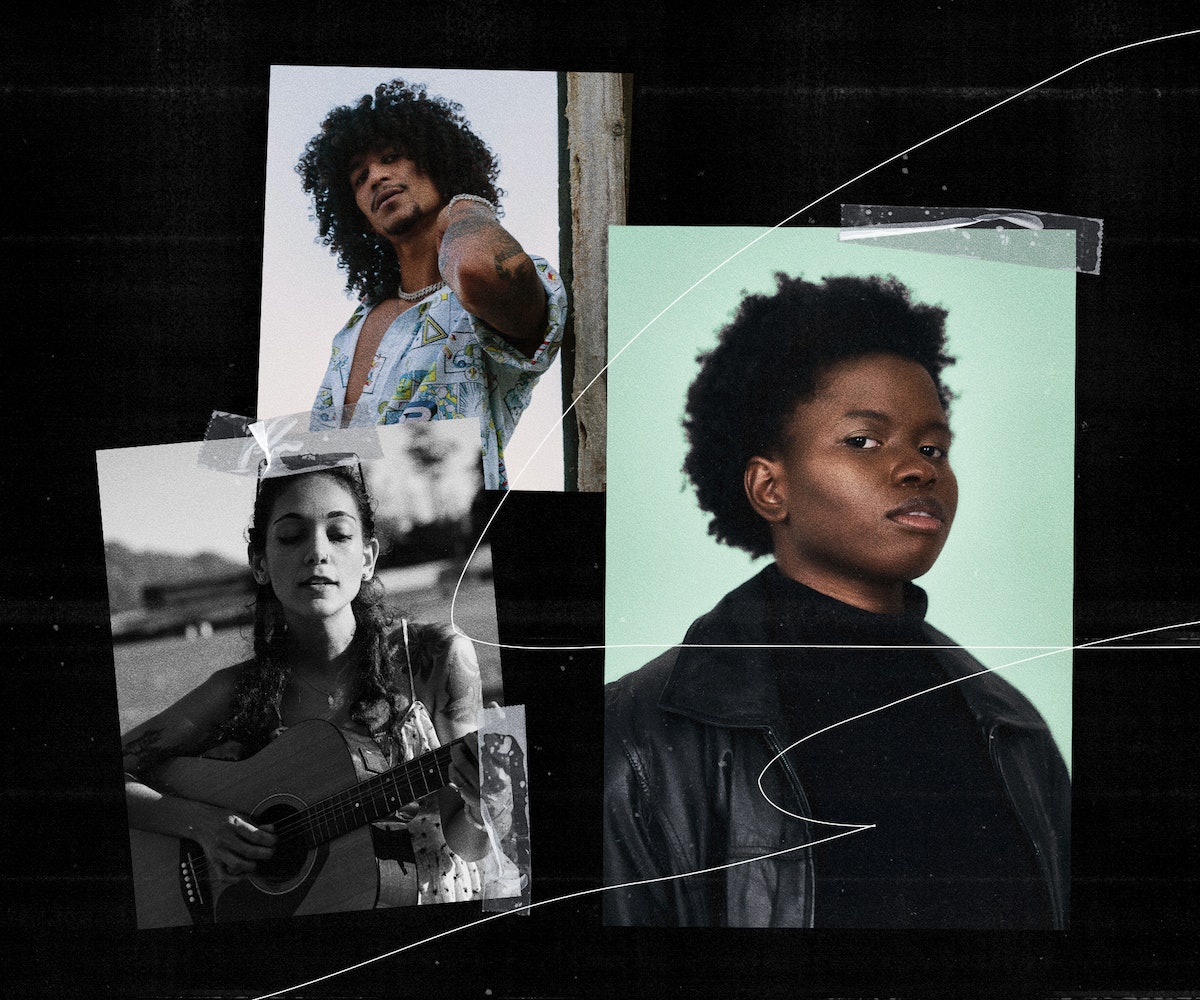 “I started playing guitar when I was 12,” Megan Gill says. “I played so much that my fingers turned into cherries. I loved every minute of it.”

By the age of 14, Gill — who identifies as queer and mixed-race, primarily Black, Indian, and white — was playing across the country to massive, thrashing audiences, with her parents accompanying her to each show.

“At this point, I never played bass in my life,” she confesses, but she was good at playing by ear and took to it quickly, auditioning for Incert Coin — metal, all-male, all years older than she was. She learned their songs as she auditioned. She got the job.

Both Gill and Incert Coin are from Trinidad and Tobago, a Caribbean island near Barbados, the birthplace of Rihanna and inspiration for her initial sunny sound — where, away from the world’s view, a devoted and largely BIPOC rock scene persisted. Gill joined Incert Coin in 2006.

Currently, rock’s subgenres from the early 2000s are having a moment, and one which celebrates Blackness rather than hiding its debt to Black people. Last year, Rising artist KennyHoopla collaborated with Travis Barker, as has Willow Smith more recently. This year, Body Count, a decades-old rap-metal band fronted by Ice-T, won a Grammy for Best Metal Performance.

But back then, even while going to shows both played and attended by mostly people of color, I lamented the fact that I couldn’t see myself in the rock broadcast on my TV from the U.S. It would be years later that I’d discover that Pete Wentz isn’t just biracial, but also of Jamaican descent. The audience in Fall Out Boy’s video for “Dead on Arrival,” however, decidedly was not.

There’s a reason people reference Y2K-era rock: By the mid- to late-2000s, many of these subgenres would lose their steam. Nu-metal bands like Limp Bizkit would become irrelevant. Pop-punk heroes Blink-182 would go on “indefinite hiatus.” So when TV On The Radio, with their potent garage sound, released their “Thriller”-like video for “Wolf Like Me” in 2006, it felt like a revelation. I naively thought that things would change for rock not only made by Black folk in the U.S., but by my Trinidadian scene, too, and that more of the bands trying to capture global attention finally would.

But in 2007, TV On The Radio would condemn The Village Voice for a racist illustration of one of its members, Kyp Malone, that appeared on its cover. And our scene? Most wouldn’t make it. A few would. And as the culture shifts, some may, still.

The Rock Scene In Trinidad and Tobago

“I’m a Black man in every way,” Nigel Rojas says. He is the frontman, vocalist, and a guitarist of Orange Sky, a Trinidadian band that came close to achieving international fame. He speaks to me draped in black, with dreadlocks that fall to his waist.

In Trinidad and Tobago, a former colony, the British imported African slaves and then replaced them with indentured laborers. It’s why our population is majority Black and Indian, with smaller minorities. “Rock came from the blues, which is from slavery music,” Nigel reminds me. But in Trinidad, our African musical inheritance would take a different path. We’d invent calypso that would eventually become soca — both forms of music bound to Carnival, a celebration reflecting slave resistance.

Carnival continues to form part of our nation’s proud, postcolonial identity, at its core antithetical to white Americanness (a thing some Trinidadian calypsonians even parodied, as in Sparrow’s “Jean and Dinah,” which talks about sex workers lamenting the end of the U.S.’s World War 2 occupation). So when modern rock eventually made its way to Trinidad, it would first be seen as an import associated with a wealthy minority — because, according to ethnomusicologist Timothy Rommen, as it received less radio airtime, and wasn’t sold, acquiring records meant affording travel.

Trinidad and Tobago is also religious. “I came from a very Catholic family, and a Catholic family that is very anti-anything that looks evil,” Rojas explains. “Even long hair is evil to them, in those times.” At 10 years old, he hid the Judas Priest and Black Sabbath albums he borrowed from boys at school, which he found “seductive” because of their cover art. After shocking his family by quitting university in London, he grew his hair anyway.

In 1996, he and his bandmates started the roots-rock band Orange Sky — its hard choruses and deft solos the backdrop for Rojas’ undeniably Trinidadian accent. They gigged across the Caribbean; then international execs came, offering visions of success to “The Black rock band from Trinidad.” Throughout the aughts, they earned multiple record deals, toured almost every state in the U.S., and even opened for a guitarist who’s considered one of the best of all time, Swedish virtuoso Yngwie Malmsteen. What happened?

Rojas wanted more publicity. He couldn’t understand why the label wasn’t chasing coverage in Rolling Stone — but they weren’t listening to his marketing suggestions. Then, the housing bubble burst. The Great Recession of ’08 and ’09 hit, and the band was sent home. “Everybody wants to be a rock star,” says Joey Sabeeney, their Trinidadian manager. “So who are these guys living on a rock down in the Caribbean as compared to thousands of people that are already living in America, or already living in Europe?”

Rojas is adamant that the band never experienced racism from record execs. Then he reflects. “But there was one incident.” They were invited as VIP guests to a metal festival in Rochester. “We sat down and ordered a pizza, and these missiles started to come at us,” he said. White boys were throwing bananas at them. Then they sped off, hurling the n-word.

At this point, Orange Sky had made it further than any band in the Trinidadian scene had. When they drove back afterwards, it was in silence.

For bands like Orange Sky, whose roots-rock groove is undeniably Caribbean, it meant more local, cultural acceptance. But Trinidadian rock, even while it grew and diminished, still maintained (and maintains) an underground position, especially compared to genres like soca and dancehall. I’d see other bands questioned by TV hosts about their accents. Why were they American? What about them made them Trinidadian?

Tripped and Falling was a Trinidadian pop-punk band that sounded like a harder, faster MxPx, electrifying stages when its lead singer, Chad, jumped and dove off of whatever was available. They were my favorite band, but I also saw them as a bunch of white boys.

“I struggled with the white boy thing my whole life,” says Chad, “because the reality is that in different spaces, you are a different thing.” He’s actually Dutch Indonesian, Indigenous American, Chinese, and Portuguese. And while he “passed” in Trinidad, he didn’t in England, where the band risked it all in 2006 with the help of the working holiday maker, a program allowing youth from Commonwealth countries a chance to work in the U.K.

Chad describes how he was chased by white nationalists at night at a bus stop, a thing he assumed was on account of his dominant Asian heritage. But that didn’t define his experience. They'd entered a Battle of the Bands contest and won, playing Taste of Chaos — the winter version of the Warped Tour. But further fame didn’t come.

He admits that the band should’ve spent more time in England working on their songs; he also mentions timing was off. “We were in a genre that was, like, two years from its death,” Chad reflects. “In England, that hardcore and post-hardcore movement was much bigger.”

But also, their music — not local enough for Trinidad — was still not familiar enough for overseas audiences. “We weren’t British punk, we weren't American punk,” Chad says. “I was just looking at, like, the kind of scene you imagine from Trinidad.”

They hadn’t been in the U.K. enough to understand it, a thing made more difficult by the fact that they were visitors on a two-year visa — in a program which now places far more restrictions on which countries can enter.

Back home, the scene wasn’t perfect, either. “In my band, I felt very safe,” says Gill, who played with Incert Coin for about nine years. But the male audiences were something else entirely. “I recall the exact first time I remember feeling sexualized. I would have been 15 years old... and yeah, just on stage, you know, tuning up and standing there, and like men shouting ‘She’s so f*cking sexy!’”

“We know the rock scene is male-dominated,” says Maggie*, a former concert-goer. “And there was just a lot of predatory behavior.”

While Trinidadian bands had difficulty entering an international music industry, women at home were dealing with the toxicity of a scene that skewed hetero and male, even if it was BIPOC. What if our local scene had been safer? Would it have meant more queer- or female-fronted bands? More music experimentation — and more breakthroughs?

Local rock fans have lamented the eventual decline of Trinidad and Tobago’s rock scene, as it hit the 2010s. But in some ways, it is healing — reconfiguring. Organizations of musicians are working on inclusivity. Gill is now part of a collective called Agendr, which advocates for more womxn and girls in Trinidad and Tobago’s audio and AV industry. GSD Productions, an organization of veterans seeking to rejuvenate the scene, are working to include more women in shows, and to provide them with more opportunities to release music.

New Young Talents On The Horizon

There is also a new cohort of musicians of color making music beyond the boundaries of the white, foreign gaze, freed up from sexist expectations and by the internet, who are articulating their Trinidadianness on their own terms.

Annalie Prime, whose idols include Lauryn Hill and Freddie Mercury, is as formidable as either — convincing her conservative household to let her play the guitar, spending her “entire high school years trying to figure out how to record music,” and even capturing the attention of Tommy Boy Entertainment, who helped launch the career of a young Queen Latifah.

As calmly assertive as Jensen McRae, but with a voice reminiscent of a sweetly acoustic Nailah Blackman’s, Prime is unafraid on her latest album, I Think Too Much (which she wrote, produced, and recorded in a closet during COVID, to combine folk with Trinidad-born kaiso. As she sings in “Moko”: “My papa showed me who my friends were/ My mamma taught me how to fight/ Cross a mother loving West Indian/ I’ll make you run for your life.”

Kalpee, part of a new wave of island pop artists (which includes Jimmy October, credited for his “New Calypso” sound), signed a distribution deal with Sony Music Entertainment after they heard “No One,” a song he made as a genre-bending experiment with producer Tano. “We didn’t think it would work,” says Kalpee, speaking to me from Jamaica — where, several tracks and a collective 22 million streams later, he’s teamed up with strikingly delicate reggae star Mortimer on a slick new reggae/rock/R&B release, “Lessons.”

Inspired by musicians like Dominic Fike and Daniel Caesar, and grounded in his roots in Calypso — which Kalpee’s been performing since he was 6 years old — the Gibson-endorsed artist firmly considers categorization an afterthought, promoting like-minded alt-Caribbean acts on The Island Stage he co-founded for South by Southwest.

And Rae is the singer-songwriter I’d wish was part of the Trinidadian scene when I was younger. Her indie-folk is lush and soulful, a little bit Kimya Dawson, a little bit Lianne La Havas. Rae’s hero is Anthony Green from post-hardcore band Circa Survive. They even collaborated on a track thanks to Instagram, where he heard her cover one of his songs and reached out.

But she was also mentored by a member of veteran Trinidadian band jointpop, who coached her through a few gigs in a former band. “They were more influential in me believing that as somebody from Trinidad doing alternative music, I could make something of myself,” she says, her music — this generation’s growing success — the proof.