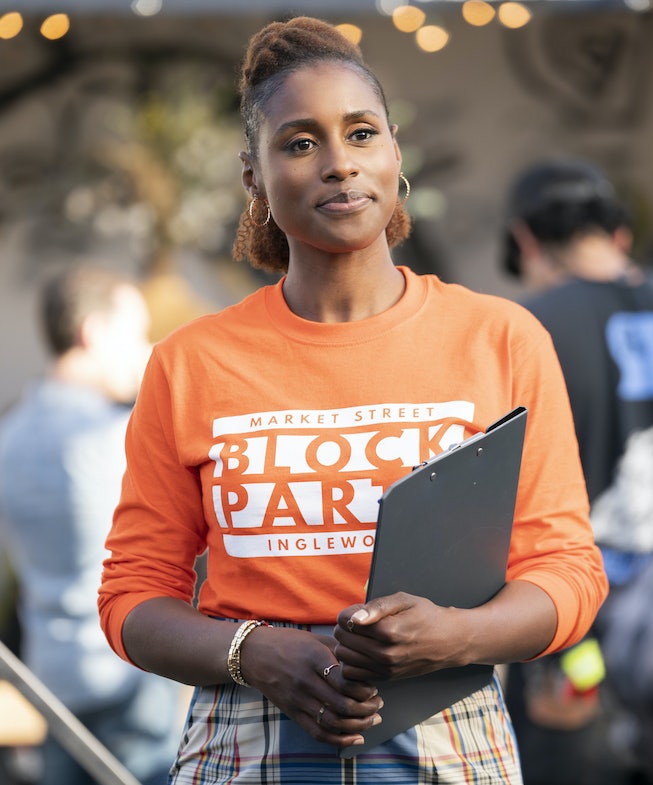 Season 4 of actor and comedian Issa Rae’s hit HBO series Insecure ended with the biggest twist of the entire series thus far. From the breakthrough series' first episode, audiences were introduced to Issa Dee (Issa Rae) and Lawrence (Jay Ellis) as a struggling young couple whose relationship met a dramatic end. Over the years tracked by the series, the two remain intertwined both platonically and romantically, modeling the complicated situationships many viewers themselves continuously recycle.

Issa Dee might make some debatable choices in love and life, but one thing that has remained intact and unbothered is her hair. From Season 1 to Season 4, as audiences watched her struggle to define her relationship with Lawrence and experience professional and personal growth and setbacks, they also were privy to the character's natural hair journey — from a fumbling, insecure Issa primarily sporting a simple TWA (teeny weeny Afro) with the occasional braid style, scarf or wrap detail, to, in Season 4, a matured, confident woman with the hairstyles to match.

The casual upgrade to Issa’s hair styling is intentional. Issa’s on-set hairstylist, Felicia Leatherwood, makes sure to align the character's coils and kinks with the outfits and attitude of the scene. As a stylist with 20 years of natural hair styling experience under her belt, Leatherwood also ensures the looks selected for the show mirror styles both Dee and the audience can duplicate without needing professional skill level or training. Talking to NYLON, Leatherwood says, “This last season, I wanted to make sure that it was an upgrade for Issa Dee, which means that I go talk to the wardrobe and makeup and see what direction they're going in."

She continued, “I really like to represent the natural hair community well, and that's my first step. How can I make this something that's reasonable for any naturalista to recreate? [That they] can look and say, 'Oh, I could do that,' or to see themselves with that hairstyle in their own natural texture and their own flavor. It's definitely a consideration every single time that I can create a hairstyle for her. It's always about either the new natural or veteran of natural hair being able to see something that inspires them, and then making the natural hair community feel proud. Back in the day, we weren't even able to showcase natural hair like that, like, on any platform. Mainstream TV was all about straightening Black hair. The fact that I get to work on clients that absolutely love their natural hair and want to showcase that on the red carpet and on the big screen gives me so much joy. It's such an honor, because then I'm able to represent our community of naturalistas.”

"It's always about either the new natural or veteran of natural hair being able to see something that inspires them, and then making the natural hair community feel proud."

On Insecure, Issa’s Type 4 hair remains natural and always presents as neat, and unfussy, never boasting a manipulated texture for more a "palatable" look. Although natural hair continues to become more common and popular, the myth of "good hair" still runs rampant in the natural community, especially on social media. Today’s modern, millennial, natural hair movement prioritizes length, volume, and loose textures — as is indicated by the endless scroll of such photos and videos found under natural hair hashtags and in brand marketing targeted to natural hair customers. The reception of kinkier, less slick styles — like the ones Issa wears — is still not as positive as the straighter, sleek ones.

The “Good Hair” Study finds “Black women perceive a level of social stigma against textured hair, and this perception is substantiated by white women’s devaluation of natural hairstyles." Additionally, “The majority of participants, regardless of race, show implicit bias against Black women’s textured hair.”

For Black women, our natural hair has always been political. Natural hair bias, however, is not just a women’s issue. Black men also face discrimination for their stylistic braids, long locs, and full Afros. In March 2020, Virginia and Colorado joined California, New York, and New Jersey in banning natural hair discrimination in the workplace by adopting the CROWN Act.

The anti-racist legislation explicitly states: “This bill prohibits discrimination based on a person's hair texture or hairstyle if that style or texture is commonly associated with a particular race or national origin. Specifically, the bill prohibits this type of discrimination against those participating in federally assisted programs, housing programs, public accommodations, and employment.” Almost two dozen states are considering passing the bill. Cincinnati, Ohio, and Montgomery County, Maryland, have also passed the CROWN Act in efforts of creating an equal society.

The manner in which we present our hair, whether natural, weave, or wig, impacts how we are perceived and treated by others. On screens of past and present, Black women’s hair often directly correlates to their love life. In films like Nappily Ever After (2018) and Something New (2006), both starring Sanaa Lathan, and Beyond the Lights (2014), lead by Gugu Mbatha-Raw, the Black female protagonist is not seen as worthy of healthy love until she decides to take out her extensions. Both blatant and subtle misogynoir force us in fiction, and sometimes reality, to choose between a man or a weave.

For Issa, her hair simply exists. Her chaotic love life, messy friendships, and professional strides are neither hindered or progressed by her hair. There’s no stress over shrinkage, no dramatic sew-in removal after a breakup, no questioning whether or not to straighten her hair before a job interview. She does not wear a wig to work and quickly snatch it off when her shift is over.

The other members of the show's main girl-squad rarely fret over their hair either. Leatherwood notes, “Issa's never really made references about her hair. You don't hear Molly (Yvonne Orji) say, 'Oh, my hair is messed up.' I'm glad that their hair is not the focus, and that it can be appreciated by the people who love hair and hair trends and pay attention to different types of styles or find inspiration in it, without us having to mention it on screen.”

For the rest of us Black girls navigating the labyrinth of life, Issa Dee stands as an example of being free to express ourselves, every f*ck-up and mirror freestyle included, without the storyline shifting to a gratuitous focus on hair woes. She's simply a modern woman whose hair does not define her existence or determine her outcome, the way it should be.