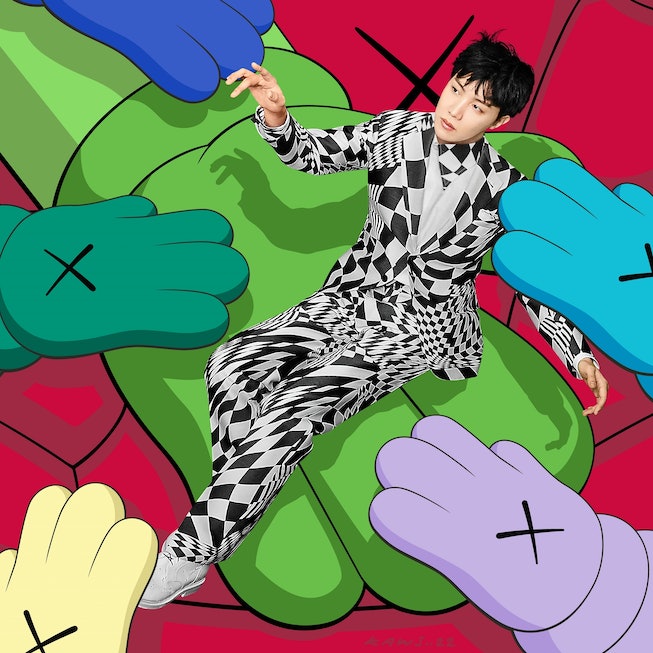 “My name is my life,” says j-hope in the opening line of his 2018 mixtape, Hope World. For nearly a decade, the BTS rapper and K-pop megastar’s name has been synonymous with his bubbly and optimistic persona, adored by millions around the globe. On the seven-track series, he chronicled this vibrant image through bright beats and a buoyancy that enamored fans, as well as new listeners. With his debut studio album, Jack In The Box, he’s now complicated that image as he enters a new chapter of his career following the announcement of BTS’ hiatus in June. In an industry that essentially encourages a lack of boundaries between fans and artists, many ARMYs may feel they know everything about their favorite musician. JITB begs to differ and asks: Who is j-hope really?

Released on Friday, July 15, the album is a play on the classic Greek myth of Pandora’s box (which also inspired his stage name), according to a press release. Across 10 tracks, j-hope peels back his deepest and darkest layers and reveals his quest to discover what’s outside the fame and fortune of stardom. “While being part of BTS for 10 years, I’ve experienced a lot,” the rapper told Rolling Stone about the project. “From that standpoint, there are stories I want to tell, and I realized that it could be tough to tell some of these stories through music with the existing image and vibe of J-Hope. I wanted people to realize that J-Hope isn’t limited to bright things. He can do these concepts and has a wide spectrum. I wanted to call attention to this ability by challenging myself.”

j-hope accomplishes that on the album, straying from BTS’ vibrant pop melodies and his own associated bright image with a seemingly darker alter-ego. Sonically, the 21-minute project takes on a blend of hip-hop and emo-punk sounds that feels like an adrenaline rush, while his words spill seamlessly into every beat coming off as quite a surprise even for day-one fans. He experiments with new sounds, like rock guitars on the pre-release single, “More.” There are also callbacks to classic hip-hop tunes on the track “What If…,” which samples Ol’ Dirty Bastard’s “Shimmy Shimmy Ya.” These sounds pay homage to the 28-year-old’s dancing and B-boy roots, using old-school tunes to strengthen his foundation as a rapper.

j-hope kicks off the album with a reading from the Greek myth Pandora’s Box. On the 2-minute track of the same title, he doesn’t hesitate to get existential, speaking of his life as a Korean idol, serving others over himself, and questioning his own perspectives. The song reveals a vulnerability and genuine self-awareness that we don’t often see in the industry as he conveys his messages through references to characters, films, and ancient proverbs throughout the album. On “Pandora’s Box,” he highlights the weight of his responsibility to his fans, rapping over smooth underground grooves, “Someone's light, someone's smile/ Someone's hope, my activities are someone's life.”

It’s evident the singer’s had these topics on his mind over the years, and he unleashes the dark clouds he’s hidden from the public eye across JITB. On “Safety Zone,” he expresses that despite achieving an unfathomable amount of success, his career has consumed his personal life and, in the midst of the glamorous lifestyle, he’s felt isolated from his inner self. “My life is becoming my enemy, it is getting lonesome/ What it feels like to keep going and not take a break, stop and ask yourself/ Reflect the past,” he raps.

Listening to the album is akin to flipping through the pages of j-hope’s diary, but it feels like there’s much more to be said.

Since the album release, publications like Variety and NME, among others, have described the album as a look into the dark side of the rapper, but I’d argue that he actually cements the concept on a note of hope and optimism. Despite the album’s confessions of struggles, on the song “There Are No Bad People in the World,” he gives us a look into his core values by commenting how humans, despite our differences, all actually want the same things. “It's hateful and wild, but think about it one more time/ How are they all alike, and how are they all the same?/ The core essence can't be changed, so realize it, and be myself/ A single belief dominates me/ There are no bad people in the world,” he raps. On the track “What If,” j-hope further reveals what he’s learned by stepping outside of the “box” – the importance of staying true to yourself. By the album’s closer, “Arson,” he reveals that he’s currently at a crossroads: should he put out this fire that he created or make the flame even bigger?

Throughout JITB, j-hope tears apart his conscience by telling stories about his own passion he once desperately sought, and his beyond-exponential rise to stardom that quickly spiraled out of his control. These songs further root the rapper as one of the greatest lyricists in the K-pop music scene as they further humanize the beloved superstar. JITB is j-hope’s most expansive project yet, serving as continuation of the evolution of the rapper as an artist outside of the group. His experimental sounds and honest words are evidence of his growth, and in some ways are reminiscent of BTS’ earlier songs like 2013’s “No More Dream” and “N.O.”

Listening to the album is akin to flipping through the pages of j-hope’s diary, but it feels like there’s much more to be said. Fans often expect musicians to remain a constant aspect in our lives but just like everyone else, they too are always evolving. J-hope’s Jack In The Box makes you wonder if we would’ve ever seen this side of the rapper if the group didn’t announce their break. But with or without the group’s hiatus, one thing’s for sure: there’s a lot we don’t know about him, or even ourselves.

J-hope’s Jack In The Box is out now.