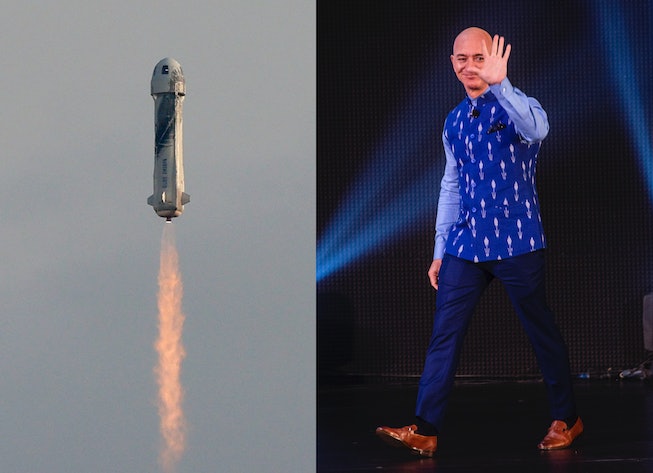 Earlier this morning, Jeff Bezos — the undisputed wealthiest person in the world — boarded his self-funded Blue Origin New Shepard rocket and launched into space. Approximately eleven minutes later, Bezos returned safely back to Earth (alas, a conclusion I personally was rooting against). The tyrannical Amazon CEO took the wildly expensive trip alongside his brother, Mark Bezos; pilot Wally Funk, the oldest person to do so; and 18-year-old Oliver Daemen, the youngest person to do so, who notably paid $28 million to board the admittedly history-making flight.

Though, in the grand scheme of things, the money Bezos paid to build a rocket and fly to space amounted to mere pennies when pressed up against his reported $177 billion net worth, those of us still struggling to pay off our student loans couldn’t help but feel slightly unnerved by the blatant display of wasted wealth.

And as one of the internet’s easiest guys to hate (never forget when he made $13 billion in a single day, setting a world record in the process), it’s no surprise that his little vanity trip inspired a whole host of hilarious memes, which Twitter users have been sending off in rapid fire succession since the wee hours of this morning. Whether they were making fun of how truly strange Bezos looked in yesterday’s pre-flight interview with CBS This Morning’s Gayle King, cracking jokes about his rocket’s undeniable (and perhaps, deliberate) resemblance to a giant penis, or simply pointing out that he had earnestly decided to take a trip to a faraway land instead of doing something more useful — you know, like ending world hunger — these Twitter users didn’t hesitate to hold the multi-multi-multi-billionaire’s feet to the fire.

And we laughed so hard! You know we love a good laugh, chile!

Find some of our favorite memes below. (And always remember: Eat the rich.)