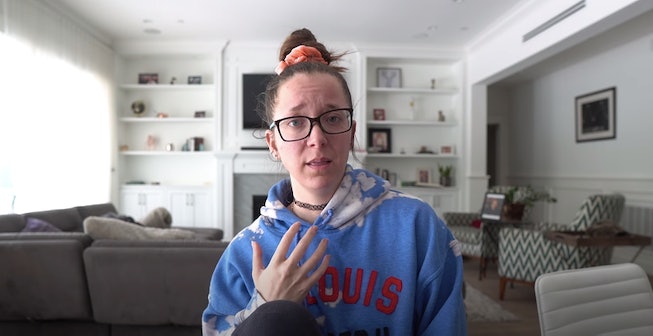 YouTuber Jenna Marbles (real name Jenna Mourey) announced through, what else, a YouTube video on Thursday that she'll be stepping away from her main channel, possibly for good. In an emotional 11-minute video, the creator and comedian addressed old videos in which she donned blackface and made jokes at the expense of Asian people as examples of why she plans to step back from her 20-million subscriber-strong channel.

“I think I’m just gonna move on from this channel for now," she said in the tearful video. "I want to make sure the things I put out into the world are not hurting anyone.”

Mourey hit viral fame in 2010 with a video called “How to Trick People Into Thinking You’re Good Looking," which currently has 69 million and counting views. A former Barstool writer, Mourey' rise coincided with the rise of the YouTube creator in general, and her brand was so strong that even eight years later, in 2018, her account was the 16th most followed in the world, according to Vulture. Her brand of lowbrow comedy made her a huge hit, with an especially large following among female creators, but also invited controversy. In her apology video, Mourey addressed and played clips of the two videos previously mentioned, both of which were filmed in 2011.

The first video shows Mourey doing a Nicki Minaj impression that she calls "cringey and embarrassing," adding, “It was not my intention to do blackface … but all that matters is that people were offended and it hurt them. This isn’t okay, and it hasn’t existed on the internet, because it isn’t okay. I haven’t done anything remotely like that, because I heard people say ‘this is blackface’ and ‘I don’t like that.”’

She also plays a clip from a video called "Bounce That Dick," in which she raps, “Hey ching chong wing wong, shake your King Kong ding dong, sorry that was racist, I’m bad a rap songs.” Addressing this, Mourey says, “I shouldn’t have said that. Ever. It’s not cool. It’s not cute. It’s not okay.”

She also addresses a third video that she believes shows slut shaming, quipping, “There’s no on-demanding an apology of me for that video right now, but put it on my tab.” She adds that she no longer thinks joking about gender is appropriate. “I don’t think making jokes about your gender is funny. I know there’s a lot of people that struggle with their identity or have varying, fluid identities.”

“Just know that I am doing my best,” Mourey concludes, also addressing online criticism for her friendships with people who've been racist: "As a someone, clearly, with their own past they are not proud of, I just try to see people for who they are right now, today."

Mourey says the video, which she might delete, will be the last she uploads to the channel, possibly forever. In addition to her original channel, Mourey has one for gaming and one for a podcast, co-run with her partner Julien Solomita.