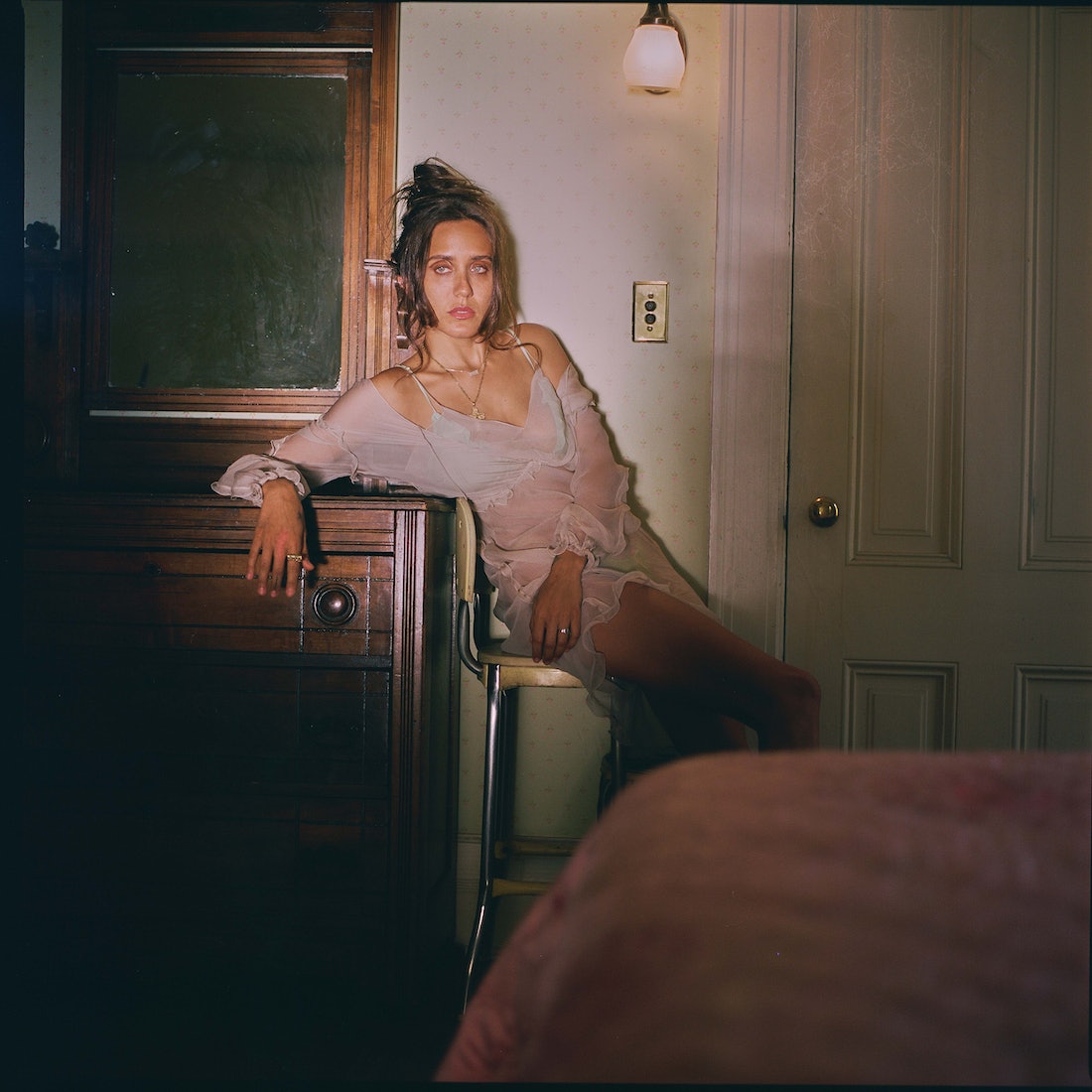 On 'Doomed,' Jesse Jo Stark Invites You In

Jesse Jo Starks shows off her every side on her debut album, out September 21.

Jesse Jo Stark has always had a thing for horror. Earlier this year, she started teasing her hair into a bouffant, a la Elvira — who just so happens to be a close friend of her mother, Chrome Hearts designer Laurie Lynn Stark, and someone she describes as “a huge inspiration.” “I don’t ever ask my mom for things like this, but two years ago, I begged her, ‘You need to call Cassandra, I need to ask her questions.”

The location for her NYLON It Girl shoot is appropriate, then: the gothic and (fictionally) haunted house where the first season of American Horror Story was filmed. “I love that show, so I was freaking out,” she admits. “I love the comedic side of horror. I’m not just trying to watch something gruesome. I like The Addams Family, cheeky-side, playing with the idea of death, all that. And that’s obviously a heavy influence throughout Doomed as well.” Styled in clothes from her own closet by Marc Eram with natural everyday glam by makeup artist Sydney Szramowski, the final product is an apt representation of Doomed, Stark’s debut album that’s dropping Sept. 21: personal, alluring, and just a little bit unnerving.

Doomed may not be Stark’s first musical venture — that started way back in 1998 when she wrote her first song at just 8 years old — but it is her most complete; a true overview of what she’s been building and who she is as an artist. “It feels like my life’s work in one package,” Stark says, calling from her home in Los Angeles. The album is a long time coming; in addition to musical forays as a child (she also formed her first band at age 11), Stark began releasing singles as a solo artist in 2017. When asked why she chose to release her official debut now, Stark’s answer is simple: “It’s f*cking time.”

“I just kept telling myself, ‘You got to get your sh*t together. It’s never going to be perfect,’” she explains. “These just felt like they needed to be a part of the world. I was ready, and I’ve never been more in my body. I just went with my gut and it just felt time. … You never know what’s going to happen tomorrow. I’ve just been trying to lead with that.”

Doomed is a high-drama, 11-track album that taps into the various sides of Stark — or as she puts it, “different moods of the day.” “I don’t feel that we as people can belong to one feeling throughout the course of a day. You wake up and you end differently,” she says. “I wanted it to be cohesive, but I also said, ‘I want one song that you can dance to. I want one song you can cry to. I want one that you’re just f*cking so pissed off.’” The album kicks off with the slithering intro track “666 in the Suburbs,” which Stark debuted live during her Lollapalooza set in July. “Maybe I act immature/hate to admit I’m insecure,” Stark sings to open the song. Over Zoom, she calls it “an introduction.”

“I don't worry about anyone hearing it or what they’re going to think — it’s [more about] me hearing it,” she continues. “When I write, I’m like, ‘Oh, f*ck, that’s how I feel.’ Sometimes I’m taken aback by my own feelings. I can’t wait for people to hear the lyrics. [On ‘666 in the Suburbs,’] I thought, ‘I can’t believe I’m saying that about myself.’ But it’s like I’m making fun of myself and I’m owning up to who I am, and there’s nothing wrong with that. I think that was a bit intimidating for me, but otherwise, once these are written, they belong to everyone else anyway.”

While songwriting is primarily a solo exercise for Stark, she enlisted the help of her friend and The Neighbourhood frontman Jesse Rutherford to collaborate on a number of tracks. “It felt like a really safe place, and I feel like he really saw me in a way that I didn’t see myself,” she says. “Everything I didn’t want to say, everything that I felt I shouldn't say about myself, he just was like, ‘Let’s do it.’” In addition to also appearing on the standout single “So Bad,” Stark eventually asked Rutherford to produce the album, too. “It’s really important to have people that aren’t in your circle that then come into your circle that you respect, because they give you the nerve. When someone says to you, ‘I believe in you’ and they have faith, you get the balls to do what you were afraid of.”

The songs (including the latests single, “Tornado,” out now) are just one part of the equation for Stark, a talented artist across multiple mediums. “It’s such a big art project, and I’m such a procrastinator,” she admits. “I woke up one day and was like, ‘Holy f*ck, I need to turn in.’” For the album cover, Stark knew she wanted more of an art piece than a photograph, so she enlisted comic book artist Greg Hildebrandt to create a painting depicting Stark as both an angel and devil — part DC superhero and villain, part religious iconography. “I’m fascinated with acrylics and oil paintings, and I wanted it to feel elevated and more grown up and realistic than my other single artworks that I’ve released,” she explains. “I also wanted it to be about duality: hell-heaven, light-dark, the two sides I believe we all have as people. That came out naturally and I thought, ‘This is what it’s going to be.’”

On the record, Stark is ready to share both of those sides of her to anyone willing to listen — strangers and family alike. “Making this album, I didn’t really want to know what anyone thought. I was like, ‘This is it, and I don’t care,’” she says. “I didn’t include as many people [in the process] as I usually do. I’ve not really gotten to even play it for my friends. And I played ‘So Bad’ for my mom the other day, and she was like, ‘When the f*ck did you do this?’”