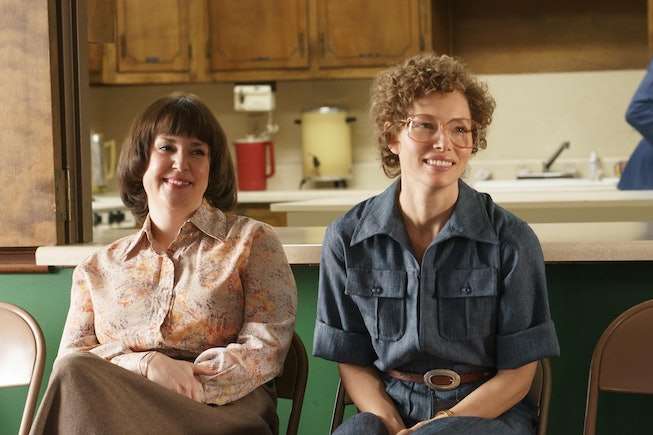 *Spoilers ahead for Hulu’s Candy*

On October 30, 1980, a jury of nine women and three men found Candy Montgomery not guilty of the brutal murder of her former friend, Betty Gore. Montgomery killed Gore by striking her 41 times with an axe, following a confrontation over the fact that Montgomery had been sleeping with Gore’s husband. Montgomery pleaded self-defense, and the court agreed.

At the time, the murder shook both the small North Texas town of Wylie and the nation as it watched the case unfold. Now, 42 years later, Hulu is revisiting the harrowing case with Candy, a five-episode limited series starring Jessica Biel as Montgomery, and Melanie Lynskey as Gore.

Per the series’ synopsis, Montgomery is “a 1980’s housewife and mother who did everything right — good husband, two kids, nice house, even the careful planning and execution of transgressions — but when the pressure of conformity builds within her, her actions scream for just a bit of freedom. With deadly results.”

Both Biel and Lynskey’s husbands — Justin Timberlake and Jason Ritter, respectively — also make surprise cameos in the series. NYLON caught up with both actresses ahead of the premiere to discuss the case, their roles, and why it’s often more difficult to portray real-life characters.

What drew you both to these roles?

Melanie: We don't want to talk over each other, but it keeps happening. You go first.

Jessica: Okay. So many things about this story were intriguing to me. This woman, who seems to be this very normal, beloved member of the community and then has this incredible act of violence, which changes so many people's lives. That for me, always — the psychological elements of that, the humanness, why we do the things that we do, how we get pushed, how we get triggered. Those are the elements that really interested me initially in this show and in this character, and then how it was all laid out. How Robin and Nick and all of our writers and creators wrote these beautiful scripts, which were just stunning and I just remember feeling like, oh, I can't, I have to do this, I just have to do this.

Melanie: I felt similarly. I was doing Yellowjackets, and I got this offer and it was five scripts, and I thought, when am I going to be able to read five hour-long scripts? But it just took a day. Every moment I had, I just couldn't stop reading it, it just was so beautifully written. And the character, I felt for her. I loved the progression of coming to learn more and more about her. And then seeing that life just be taken, I found it completely heartbreaking and related to a lot about her.

Were either of you familiar with the case beforehand?

Melanie: Jess was talking earlier, about how great the book Evidence of Love is, and how that was such a big resource for us. And we also had a great Zoom with Jim, who was one of the co-writers of the book. The book is a really great read and it has so much information in it.

Given how rare this level of violence usually is from women, what do you end up feeling like the motivation for each of your characters was?

Jessica: Right, well, I'm struggling here, because I'm trying not to put words into this person's mouth who I don't actually know. But I feel that while we were shooting it, what I was working with in this portrayal of this person — there’s a sort of trigger moment Candy talks about. This moment with her mother in the past, where she was over-civilized, and she was told to be quiet and not tell her feelings and not be able to communicate her emotions.

And she bottled it up and it stayed bottled until this one moment where, Betty did this one thing and boom, she just goes into a trance and flies off the handle. Besides that, the motivation I feel like I was trying to understand and work with was just this idea that this special spark that she had in her life with Betty's husband at the time, was already gone.

It was more symbolic that, this was her life that she had chosen, and unfortunately she was regretting it. And Betty was this person in her face at this one moment, where she just got pushed over the edge, and all those held back emotions, all of those things contained and repressed and held back, just came overflowing out. She was incapable of even being present or stopping it, and unfortunately this poor woman [Betty] was in the way of that.

Melanie: For me, it's a little hard to talk about because it's accepting Candy's version of the story, which is that Betty went and got the axe and came back into the room with it, which is a very weird thing to do.

But also, Betty did weird things. I don't know, I had to kind of give myself over to the version of the story that we were telling, and it helped that the narrative was very clearly structured, that it was Candy's story that was being told, there was nothing added, even in the stunt choreography. Robin was very careful. There was a moment where there was some choking that was added by the stunt coordinator, and Robin said, "That's not in her story, we're not going to put anything in that was not in the story she told in court."

So for me, it was helpful to just be like, this is the story that my body is telling right now, but I was playing somebody who's not here anymore. She doesn't have a voice, so I felt protective of whatever her story might be.

Do you approach a role much differently when it’s based on a real person, as opposed to a totally fictional character?

Jessica: I think it definitely is very affecting all the time, we've talked about this... Mel obviously has already said that she feels protective over Betty and, I mean, it's kind of terrifying to be playing people who exist in the world. There are so many feelings wrapped around it. You don't want to be disrespectful. Sometimes you think God, I hope somebody watches this and isn't completely mortified by it. Those things go through your brain.

I found it to be slightly terrifying to try to walk the fine line of telling this story the way that she told it, and also to try to be respectful of Betty and her family and not glorify anything. And to really talk about mental health and about stereotypical gender roles, more conservative roles from back in that time — which we still deal with today and have not necessarily gone away, but it's changing. I mean, it's a lot of responsibility, and I think you constantly think about it.

Melanie: I think there's a sort of internal struggle, because the whole time I keep thinking, Betty has kids who are somewhere in the world who may or may not watch this. I don't know what you would do if you were in that position, what an awful position to be in. But, everybody that we talked to said that Betty had struggles with postpartum depression, which was not diagnosed at that time. And I wanted to communicate that she was a woman who was struggling, but that she loved these children, which is something I believed very deeply that we also heard from a lot of people.

So you’re trying to communicate a depression that's really impacting her life, but also a love, and then there are practical things like — Betty's from Kansas, she feels like an outsider. Everyone around me is doing Texas accents, and my actor brain is like, it's going to look like I just couldn't do a Texas accent, we need to say at some point that she's from Kansas. She's from Kansas, I have to be true to that, so it's your actor brain and your mother brain, and it's just...it becomes very complicated.

Being so close to the material, what did you think of the ending and the verdict that Candy got?

Jessica: I always thought the ending was such a fascinating part of the story, and there were so many different elements to that case. Things that happened with the evidence, and technology we didn't have back then. There's so many different things that if you think about it today, who knows, right? But more than actually having an opinion about it, I think I just really like that we're really offering it to the audience to say, what do you think? This is the story we're telling, we're telling this one side of the story because we only have one side of the story. You make the call, you're the jury now, and what do you think about that? And that's the joy of the end of this script. We don't have to have an opinion, which feels freeing because I don't know how to make an opinion about that.

Melanie: I think an aspect of the trial that really got me is something that happens a lot of the time when there's a female victim. Whether they're alive or not, they're also put on trial — their personality, their choices in life, how other people responded to them. And that was part of the story that really broke my heart, because she had a hard time connecting with people, Betty, and it became part of Candy's defense. In a way as a shy, awkward person, that made me really sad. I was like, "Gosh, she literally doesn't have a voice in this whole trial."

That really struck me too. My last question's on a lighter note, but what was it like to have your husbands make a joint cameo and work alongside them?

Jessica: It was really fun, actually. We'd never worked together in that capacity, and I mean, he's a fabulous actor and a comedian, and so funny. It was like this strange foursome, I was lucky enough to be able to work with both of them, and it was so much fun. They were so good together, and.

Melanie: And now they're besties which is...

Jessica: Yeah, it is so cute.

Melanie: Oh my God, so many times I'd be running around trying to get our daughter ready for bath or something, I'd be like, what are you doing? He's on his phone, he's like, texting Justin.

Melanie: I would love to text each other this much, just so you know.

Jessica: We do pretty good I think.

All five episodes of Candy are now streaming on Hulu.