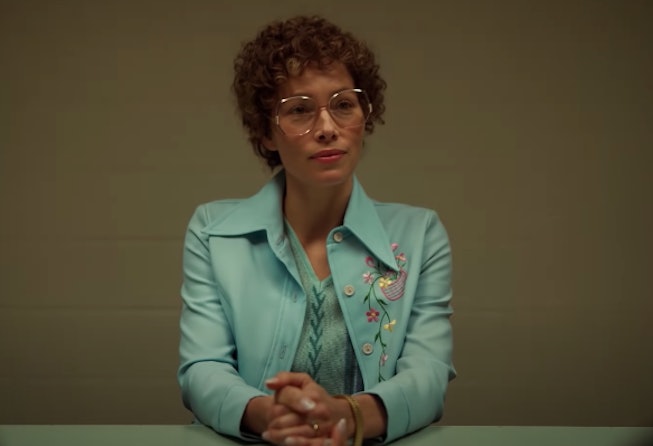 After her successful turn in The Sinner, Jessica Biel is returning to television as one of America’s most prolific criminals. The Emmy Award-winning actress is starring as Candy Montgomery in Hulu’s new limited series, Candy, which tracks the events leading up to a shocking ax murder.

The upcoming series is based on the real chilling case that took place in Fairview, Texas. Per the synopsis, Candy follows Candy Montgomery, “a 1980’s housewife and mother who did everything right — good husband, two kids, nice house, even the careful planning and execution of transgressions — but when the pressure of conformity builds within her, her actions scream for just a bit of freedom. With deadly results.”

Hulu released the first trailer for the series this morning. The two-minute teaser shows Biel — who bears an impressive resemblance to the real Montgomery — as she struggles to mitigate the concerns surrounding her friend's death. As the investigation unfolds, and secrets from both women's lives come to light, the whole town is engrossed by the terrifying tragedy.

Candy was created by the team behind The Act, which told Gypsy Rose Blanchard’s disturbing life story. Producers Nick Antosca returned to the streamer to create Candy, with the help of writer Robin Vieth and director Michael Uppendahl. The rest of the crew is rounded out by an impressive cast of actors, including Timothy Simons, Melanie Lynskey, Pablo Schreiber, and Raúl Esparza.

The five-episode series will premiere on Monday, May 9th. After that Hulu will release a new episode every night until the finale on May 13th. In the meantime, HBO Max is working on their own retelling of the 80’s ax murder called Love and Death. Their rendition stars Elizabeth Olsen, Jesse Plemons, Patrick Fugit, and Lily Rabe. The release date for their version has not been released.

Until then, check out the first look at Candy below.