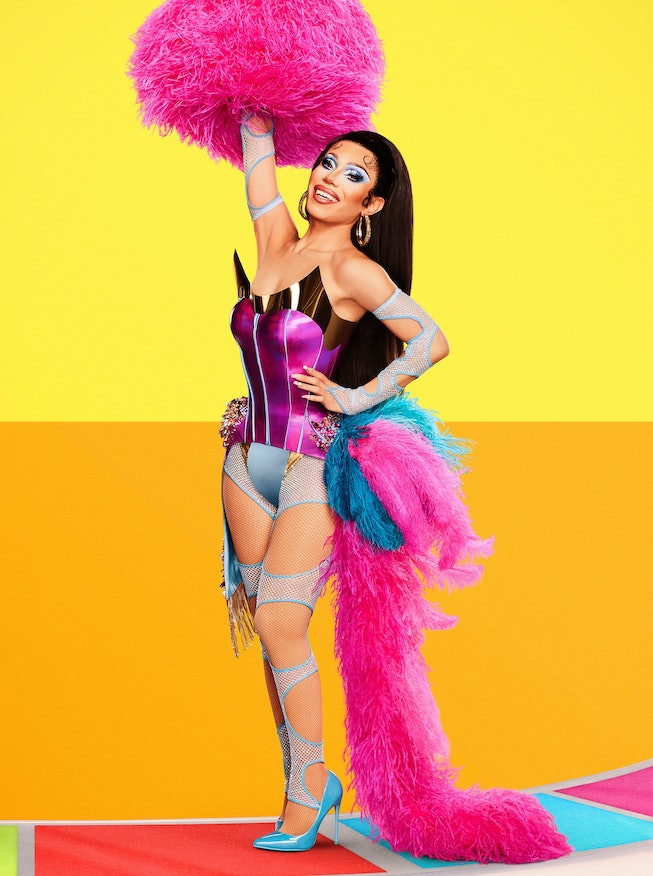 For the twelve or so queens who don’t walk away with a crown at the end of any given season of RuPaul’s Drag Race, nothing could feel better than knowing you’ve made a strong, lasting impression on the show’s namesake. That’s certainly something Jorgeous can relate to. Since her very first time hitting that Main Stage runway, Jorgeous has had RuPaul’s full attention. Week after week, the San Antonio-born beauty has been showered in praise from her idol, who has continuously told her that she was “born to do drag” and show off her “starpower.” Sure, the 22-year-old queen may only be five-foot-two, but that small frame packs a powerful punch.

A self-taught dancer who started performing in gay bars at the tender age of 16, Jorgeous is as used to being underestimated as she is to silencing her haters nonetheless. Still, nothing could have prepared her for the “really hard” experience of competing on Drag Race, where being beautiful and slaying a lip-sync aren’t enough to win the crown. A nervous public speaker who doesn’t consider herself naturally funny, Jorgeous stumbled in challenges that required her to think on her feet (Snatch Game) or deliver jokes (trailers). This mentality came back to bite this week, as the queens were asked to prepare a comedy routine for a roast of frequent judge Ross Matthews. Giving up before the challenge had even begun, Jorgeous’ fate seemed sealed from the episode’s earliest moments. When her routine failed to elicit many laughs, landing her in the bottom, it felt like a self-fulfilled prophecy. After a three-way lip-sync against fellow competitors DeJa Skye and Daya Betty, the dancing diva was unfortunately sent packing.

Ahead of her elimination, NYLON hopped on a Zoom call with Jorgeous to talk about going home, feeling defeated, not being confident in her public speaking skills, how it felt to hear constant praise from a drag queen she had been watching since she was a baby, and how she thinks she’s grown most since first entering the Drag Race Werk Room.

In your own words, what do you think happened in this episode that led to your elimination?

Oh my god. In just one word?

No, not in one word — just in your own words.

Oh, well, girl, it was a mess. It was just a mess. That's how I feel about this episode. Girl, this episode was really hard to do.

You seemed pretty defeated from the very beginning of the episode. As soon as it was announced that this was going to be a roast, you were like, Welp, that's the end of that.

Why do you think you immediately got into your head about that?

Honestly? During that time, during that point in my life, I was really not confident in speaking. I always felt like I slurred my words or I sounded too soft or that my words didn't have any impact. You know what I mean?

I just didn't have any confidence in myself at that point. Girl, at that point, I felt so defeated and I felt like I didn't have any energy left to give. And so when it came to speaking in front of a group of people, it was just like, “Oh my God, I know this is going to be rough. I just know it.” And maybe it was my fault for getting in my head too soon at that point, but I was just terrified.

In the episode, you talked about how little fun you had with the challenge. Was this the first time this season where you had literally no fun? Or were there other times too?

Oh, I would definitely have to say [that I didn’t have fun] when we did those trailer things. The trailers, the promos — that was a good idea, that was a good challenge. But doing it was just like…oh my god. Having to write down your own things to do? It was just really difficult. With [prewritten] lines, you could create a character off that. But when you’re creating your own character kind of and writing jokes based on that, it was just really hard. You know?

I completely understand. This episode, you also talked about struggling to tap into “that Jorgeous flare” that the judges kept asking for. Do you have an idea of what it was about Drag Race as a competition that was stopping you? Because it’s definitely there.

Oh my god. The thing about the competition that was making me struggle is just that…well, you have to be quick. You definitely have to be super-quick in a competition like this. But the thing about me is that I'm not quick whatsoever. I have to sit and think about something for a minute before it comes to my head. But during Drag Race, it's just like you have to be on it at all times. But watching the show now and watching myself on TV, I'm like, "Oh, girl, I could have taken it that extra mile completely!" You know?

Well, regardless, I think a lot of people — both your fellow competitors and the viewers at home — picked up on how much respect RuPaul had for you. She was so clearly in love with you, always saying that you were born to do drag and that you have so much starpower. How did it feel to hear RuPaul saying these things week after week?

It felt so amazing because I've watched RuPaul ever since I was a kid. I watched To Wong Foo, Thanks for Everything! Julie Newmar as a baby. So the fact that I got to meet her and she's telling me all these great things, it was just like, Oh my god, I cannot believe that this is even happening right now. It just feels so good. It's very validating for everything that I've done and how hard I have worked to get to where I am today, you know?

Would you describe yourself as the season's de facto Lip-Sync Assassin?

Oh, yes, absolutely — and no one could take that away!

Nevertheless, how did you feel when you found out you were going to be in the bottom this week, especially since it was your third time there and this was going to be a three-way lip-sync?

Well, you definitely didn’t get the boot when you received the season’s much-coveted Double Shantay after your lip-sync against Jasmine Kennedie. How did that feel?

Well, in that moment, I was like, Girl, it could honestly go either way. Jasmine is an entertainer and Jasmine is a star when she performs, too. So, girl, I was like, Oh my god, this is going to go so good or it's going to go one way or the other. But doing that [performance] with her was just an amazing feeling because, on that stage, it was just like everyone was having fun, you know?

So you’ve been performing in bars since you were 16, and you’ve talked about how that experience was a little difficult because some of the other queens didn’t respect you and didn’t think you deserved to share the stage with them because you were so young, you had just started, and you hadn’t paid your dues yet. How do you think having that as your first foray into drag impacted your approach to Drag Race as a competition?

Did you ever have a moment when you were thinking about how hard the competition was getting, but then RuPaul called you a star and your perspective changed?

Oh, yes. Definitely during Snatch Game, because she was really hyping me up during that challenge and, like, before it even happened. But girl, I was just not giving.

During one of your confessionals this episode, you joked about not wanting to watch the roast when it aired because of how cringe you think some of your jokes were. Now that you’ve had some time to get over it, do you plan on tuning in tonight or are you skipping?

Oh yes, absolutely. I'm going to be watching that episode tonight. I'm going to be around a lot of amazing people who have supported me throughout this journey and even before I made it on the show. It's going to be nothing but love. Now that I've watched myself on TV and seen myself grow as a person, I feel like I could definitely watch it and be proud of what I did, regardless if I did bad.

How would you say you've grown the most since starting your Drag Race journey?

Watching the show now, it's like, Oh my god, I could have totally taken it there. I could have totally taken it further. I was just in my head so much during that time. But now, watching myself, I'm like, Okay girl, you're way too in your head. No wonder people are getting annoyed by you being there. But if I ever get another chance or another shot, I know what to do now and not to be as scared as I was.

Well, you may be gone for this season, but your life is still about to change immensely now that you’ve been on Drag Race. What are you most looking forward to in your new career as an official RuGirl?

Honestly, I'm really looking forward to all the tours that I'm going to be doing soon. I can't wait to see all the amazing cities that I'm going to be in and see all the amazing people. Getting on Drag Race is like… How do I say it? The reason why I wanted to get on Drag Race is to do all of these tours. I wanted to work as a full-time drag queen, you know? So I'm living my dreams now, I guess I could say. I'm honestly living my dreams.