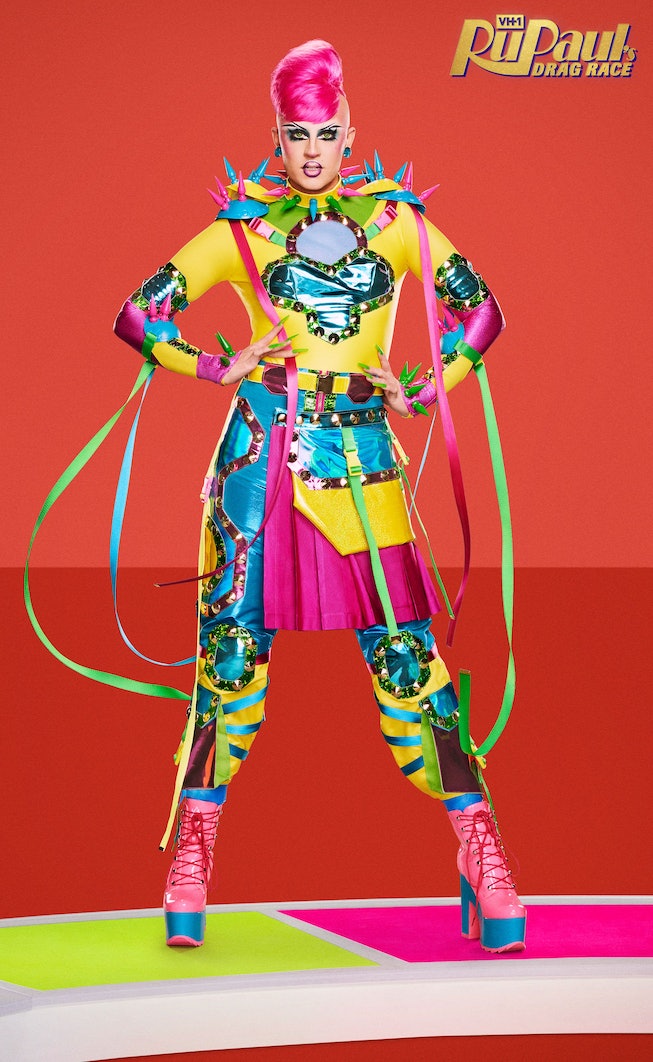 “You Betty be ready,” said six-foot-five drag queen Daya Betty as she sashayed into the hallowed halls of RuPaul’s Drag Race’s famous Werk Room for the first time. Decked out in a yellow and black Jem and the Holograms-inspired dress, complete with fishnet stockings and black elbow-length gloves, the 25-year-old looked perfectly edgy — embodying her “mid-Missouri grunge punk-rock girl” aesthetic to a tee. It didn’t take long for her fellow contestants to realize that she shared a certain resemblance with season 12 finalist Crystal Methyd (I mean, just listen to that voice). But despite being members of the same drag family, Daya seemed intent on proving that she was her own queen with her own story to tell.

Alas, Daya wouldn’t get too much time to tell it. Tasked with showing off a talent for this week’s main challenge, Daya was one of several queens to do a lip-sync; as an homage to her younger self, she opted for a magician-themed number to P!nk’s 2001 Missundaztood classic “Get the Party Started.” But while fellow lip-syncing competitors like Jorgeous and eventual winner Angeria Paris VanMicheals separated themselves from the pack by incorporating technically impressive dance moves or performing to an original song, Daya’s P!nk cosplay failed to make a strong impression on the judges, who docked her performance for failing to communicate who she was as a queen. In the end, the Springfield-born queen landed in the bottom next to DeJa Skye, and was ultimately sent home after a lip-sync to “Falling” by guest judge Alicia Keys.

Ahead of her elimination, NYLON hopped on a Zoom call with Daya Betty to talk about going home before her time, how coming from a “small farm town” taught her the value of being individually creative, her relationship with her not-drag mom Crystal Methyd, why she felt some pressure from the fandom even before the competition, and why living with diabetes doesn’t define her.

I always like to start these interviews by asking what you think went wrong leading up to your elimination this week.

Well, I'm a huge emotions person. Some people have emotions and they try to ignore them, but I'm one of those people that focuses on every emotion as it comes. If I'm feeling excited, I'm really in the moment feeling excitement. If I'm feeling nervous, I'm in the moment feeling nervous. So once something negative happens, or once something doesn't go as planned or as I thought it would, I just really kind of focus on it. It's a natural human thing to do, but I do think being able to navigate my thought process and not feel caught-up would've helped me out a lot. But you know, I'm a firm believer that everything happens for a reason, so it's kind of just a “brush it off and keep going” sort of situation.

This week’s maxi challenge was a talent show and you decided to lip-sync to a P!nk song. What was the inspiration behind that?

Well, you know what? I felt like a lot of my talents weren’t necessarily things you could do in the short amount of time that they gave us to perform — I was like, "How am I going to show this talent in this amount of time?" So I guess I instinctually just went for the simpler idea. I was like, “It's easy. It'll work. I've done it a million times.” Also, I love a good throwback to the early 2000s! I’m a kid of the nineties and my childhood was very much that of the early 2000s. Actually, this is so ridiculous, but I had a birthday — I think it was like my sixth or seventh birthday — and for my party favors, I gave out CDs. This was when you could burn CDs illegally…

So I burned these songs on the CDs, and the first song on there was “Get the Party Started” by P!nk. So I thought [my performance] was just a cute little nod to where I used to be, to that gay little queer kid who grew up in the middle of a small farm town. It was like, now, I’m bringing him to the Main Stage of RuPaul's Drag Race, you know?

So, technically, you weren't the first queen eliminated because this was a split premiere…

But how did it feel to go home on what was, you could say, your first episode?

I think the most devastating part for me was that I make a lot of my stuff. A lot of my drag is what I create with my own hands and I really wanted to showcase that. Drag is very mainstream now, and you see drag queens wearing really big-name designer clothing and all these beautiful gowns and stuff like that. And for me, yes, that's awesome when people can do that and can afford that and have teams behind them. But coming from Springfield, Missouri, it's like, you’ve got to work with what you’ve got, baby! You’ve got to go to the bins outside of the thrift store before the thrift store even opens, you know? So, I was really excited to show all of the sickening things I made with my own two hands. That was the thing I was most upset about.

Although you don’t call season 12 contestant Crystal Methyd your “drag mom” (because the label ages her), she does occupy that role for you. Knowing how far she made it in her season, did you feel any particular pressure to live up to that when you came on?

You know, I look up to Crystal so much. She really is the person that's been my drag mother of sorts, even though that's not what she likes to go by. So, yes, there was pressure, but I don't think it was so much from her. Going into it, the pressure was more with the fandom because she was such a well-loved character from her season. I think that was maybe the most stressful part. Also, I had been compared to Crystal multiple times before any of this, so it was nothing new to hear comparisons or people asking me about Crystal. But I don't think it caused as much pressure as people would think, to be honest, because I am my own person and Crystal knows that. I know that. She understands my vision. I understand my vision. So, I guess, no. Not really.

Did Crystal give you any special advice before coming onto the show?

You’re the first openly diabetic person to compete on the show, and given that your drag name is a direct reference to that, it seems like a topic you find important. Although you weren't on the show for a super long time to talk about it, coming into the competition, was living with diabetes something that you wanted to raise awareness about?

Yeah. It is a very important thing. Anything you can raise awareness about that you personally deal with on a day-to-day basis is important to talk about [in order] to connect with other people that might be experiencing the same thing. However, for me, it's not my number one mission or goal. Living with diabetes is just a small part of my journey. It's not really anything super crazy to me. Don’t get me wrong — it's a struggle at times and it's not the easiest thing to go through. But I just really wanted to show that, regardless of things like that, you can still do whatever the hell you want to do. It shouldn't cause you to step back from accomplishing anything.

Obviously, anyone in the bottom has a reason to be upset. But in Untucked, you seemed particularly undone by RuPaul’s comment about your personality not shining through enough to get to know you as a queen. What was it about that comment that hit you so hard?

Well, imagine. It was a very, very long day. I was very stressed. There were a lot of emotions, like I was saying earlier. And, you know, you always want to put your best foot forward. You always want to shine out in your own way. So, for me, because I was so in my head, especially after the talent show, I knew deep-down that I wasn't giving my all. I knew deep-down that I couldn't give my all because I was so overwhelmed with every emotion.

So I was more mad at myself. I was angry with myself because I was like, I know I have more to show. I know that I could have elaborated more or elaborated differently to show more of who Daya is at her core. And the fact that I didn't? It wasn't me being upset that Ru said that. It was more about me being upset at myself that I didn't do it in the first place, you know?

What challenge are you most upset you didn't get to compete in?

Once this episode airs and people get to meet you and know who Daya Betty is, your life is going to change. What are you most looking forward to in your post-Drag Race career?

Before COVID and everything, my favorite part of being a drag queen wasn't the performance aspect. It wasn't any of that. It was being able to go to the club and just interact with people. Just being able to do your gig, do your thing on stage, and then, after the show, have a drink with somebody on a patio and talk to them or something.

It's so powerful to know that you could be performing on stage in front of a room full of people you don't know, and whether it's just one person or 15 people, you can make a connection. I think that’s so freaking cool. I think we lose sight of the fact that we're all just human beings and we all just want to connect with each other emotionally and have the same understanding and experiences to share with one another. So, definitely, being able to go out and meet everybody and have one-on-one conversations with people is what I'm really excited for in the future.