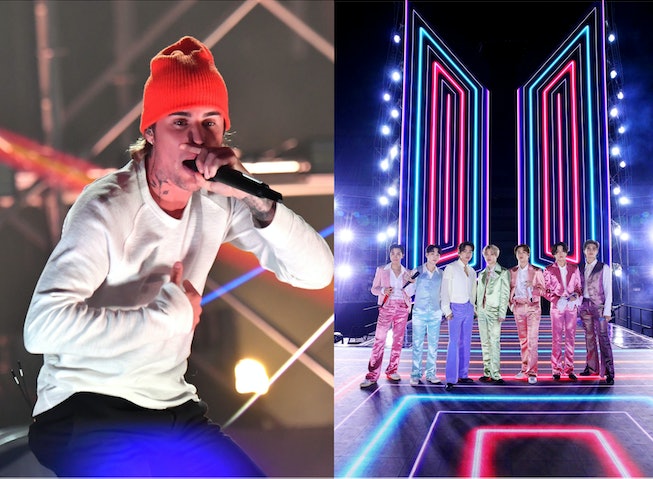 In news that will surely break the pop world, Justin Bieber and BTS are reportedly collaborating on a new song according to Page Six. Citing an insider source, the pop star and mega boyband are “taking their time on it and going to make sure it is released right.” There’s speculation that it might be released as part of Bieber’s second deluxe packaging of his latest album, Justice, which would follow the Triple Chucks deluxe edition that was already released on March 26.

The collaboration seems to be a result of the recent merger between the two artists’ management companies, Big Hit Entertainment and Scooter Braun’s Ithaca Holdings. Together they are now known as HYBE. Variety broke the news in early April, estimating that the deal was valued at over $1 billion. As a result, the merger brought BTS, Bieber, Ariana Grande, Demi Lovato, and more under the same management roof.

Even without the deal it was likely that Bieber and the boyband would’ve eventually teamed up; Jungkook of the South Korean boyband has cited Bieber as a major musical influence in the past. Bieber has also publicly praised BTS’s music and work ethic. In a voiceover for E! News from 2020, he seemed to offer his thoughts around their hit “Dynamite” and why the group has been “shattering records across the global music industry.”

Bieber has been on the move for the past few months promoting Justice, his sixth studio album. He recently made an appearance on Fallon as part of their Classroom Instruments series, where he performed his hit “Peaches” alongside the late night show’s host and The Roots band.

BTS, on the other hand, announced their next summer single “Butter,” due to arrive on May 21. It will be their second English-language release, and it’s rumored that the track is part of a larger project that fans seem to think will be dropping in June.