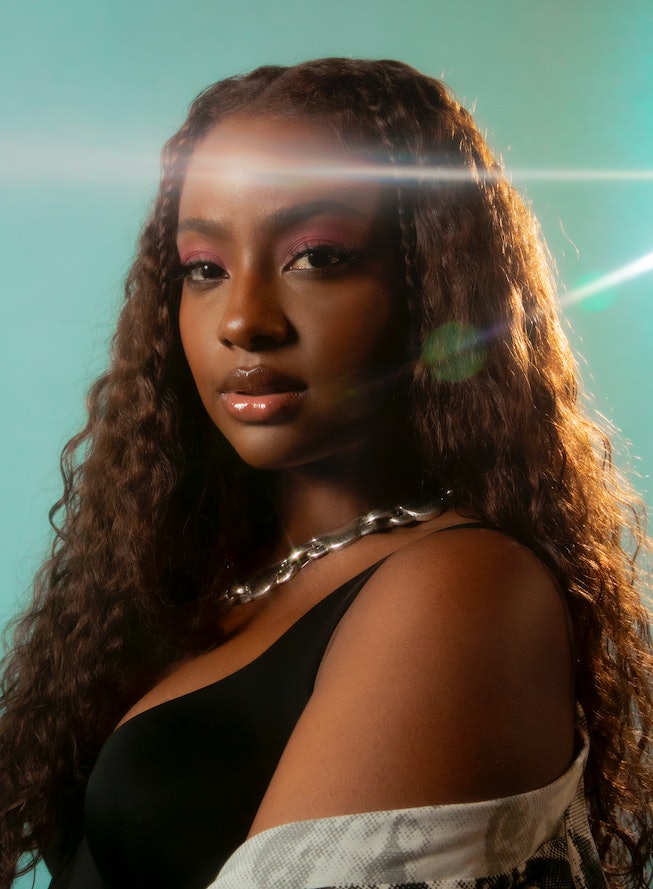 On July 10th Samsung hosted a crowd of eager fans waiting to hear the Tumblr sensation turned R&B star Justine Skye, perform songs from her newly-released album SPACE AND TIME. The event, part of Samsung and Billboard’s Songs of the Summer concert series, was held at National Sawdust in Williamsburg — not far from Skye’s hometown of Fort Greene—- and was lit in her signature purple hue.

Upon entering the venue, guests were ushered into the cozy and inviting performance space. It was the perfect setting for Skye, who was on a mission to connect with the audience. Backstage she explained her excitement to NYLON. “I love intimate shows more than anything because you really get to connect,” she said. “And I get to see all my people and really just know that people are listening. Like I know that for sure.”

Unsurprisingly, grabbing the audience's attention was no issue. The second she reached the mic, fans rushed to the stage, standing within an arm's reach of the singer. Dressed in a simple black bra, baggy jeans, and printed button up, she quickly transfixed the crowd. Fans belted the lyrics to the songs they knew, and swayed along to the ones they didn’t — seemingly impressed wby Skye’s fresh, grown and sexy vibe, and buttery smooth vocals.

The floor shook while people danced to her new, saucy, hit, “In My Bag.” The song, to put it simply, is about being a bad bitch — a sentiment Skye holds near and dear to her heart. When asked how she wants to be perceived, that was her descriptor. “A bad bitch,” full stop.

The singer went on to explain that this record is her best yet. “I am so confident about each song on this album, this full body of work. I enjoy performing these songs and just hearing the way that people react or seeing them react to it,” she said. She also shared that singing “In My Bag” was the highlight of her set, calling the performance an “amazing feeling.”

Catch some of Skye’st set below, and see the rest (including a set by Saweetie) using this link: