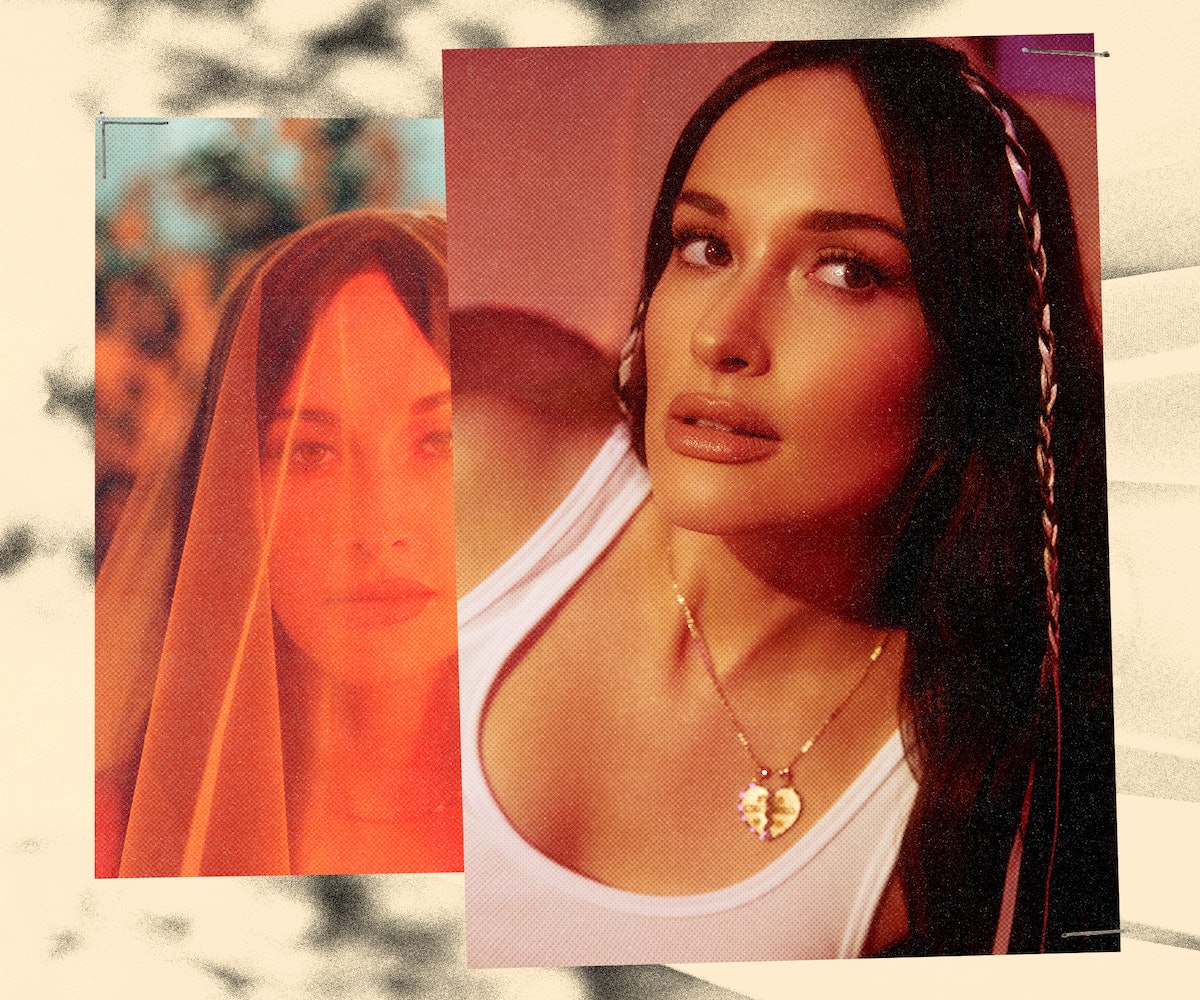 In 2018, Kacey Musgraves captured a rainbow. Golden Hour — her fourth studio album after her major label studio debut, Same Trailer, Different Park — was a breezy breakthrough that had the satirical country artist who’s friends with Willie Nelson open for pop magnum Harry Styles, as well as win the Album of the Year Grammy. Musgraves had fallen in love, wrapped up in an emotion so weightless that a rush back down was inevitable. Her latest album star-crossed doesn’t have any rainbows. “I’ve been to hell and back/ Golden hour faded black/ Say that it ain’t coming back,” she proclaims in the album’s third act on “What Doesn’t Kill Me.” Honestly, she’s much better for it.

Musgraves spans the spectrums of genre the way she delights in all the rainbow’s hues. She’s a genre outlaw, a musician indebted to country music from growing up in a small Texas town. Her first few albums subverted the expectations of country music from within the machine, and exercised her stellar songwriting skills. Now, her latest release nods to that past while embracing a blend of influences she absorbed as a child — like Sade, Cher, and the Eagles — without allowing them to stall or distract from star-crossed’s greater purpose for emotional catharsis in the wake of personal tragedy.

Inspired by Shakespearean and Greek tragedies, star-crossed is broken into three acts, reflecting on the heartache and growth that Musgraves experienced after the dissolution of her marriage to ex-husband Ruston Kelly, the relationship that inspired Golden Hour. Despite the darkness that creeps in lyrically across these 15 tracks, star-crossed still has a similar geniality to its predecessor. Part of that is due to the same production and writing team she worked with, Ian Fitchuk and Daniel Tashian, and that her previous album was fueled with equal parts melancholy and doubt even though she was head over her boots in love.

Musgraves grouped this album into three acts after most of these tracks were written, and it certainly feels that way. The acts are defined by tonal shifts rather than clear structural indication via album layout; as a result, the tragedy aspect is much subtler than anticipated. At first listen, star-crossed feels chaotic and patchy, the searing heat of “Breadwinner” spilling into the all-too-real “Camera Roll,” and followed by the weak ’90s Shania Twain take “Easier Said.” But the depth and variation of star-crossed make Golden Hour feel almost one-note in retrospect. Star-crossed is a patchwork of anguish and the revelations that result from rebuilding yourself with the leftover pieces. Golden Hour might’ve had a clearer aesthetic, but star-crossed is a stronger collection.

On the album, Musgraves, Fitchuk, and Tashian take the sparkle of Golden Hour and sew it into these tracks with greater detail and a deeper spectrum of color. Even with the awkwardly placed Tokyo love letter “Cherry Blossom,” which might fit better on Golden Hour with its wistful charm and ease, the decision to nestle its cautious warning between the pleading groove of “Good Wife” and the childhood-reminiscing “Simple Times” is smart. It’s her final call to patching up her romance before she fully escapes into nostalgia on “Simple Times,” which happens to be a more nuanced nod to the oversaturation of the ‘90s than most pop stars have presented.

On “Good Wife,” her Southern upbringing that’s hellbent on people-pleasing comes out in the form of an idealized way of making her husband’s day the best possible. We’re brought back to the beginning with Musgraves’ devastating desire to be someone’s everything, her actions aspiring to reflect her immense love. But every time she cries, “God, help me be a good wife,” her voice is plastic-wrapped in vocoder. It’s a cool trick that was brilliantly used on Golden Hour and maintains its potency here, slyly emphasizing that maybe the domestic urge to please isn’t the relationship’s bandaid.

Star-crossed is a patchwork of anguish and the revelations that result from rebuilding yourself with the leftover pieces.

Today, privacy is a rare fossil, especially when it comes to celebrity feuds and the normalization that any personal information is up for public grabs whether for entertainment or spite’s sake. When Musgraves released the title track last month, star-crossed seemed like it would pull back the curtain on a rose-colored romance. What’s striking about the title track is not only the climax-less production, but also that Musgraves is detailing her loss by singing to her ex-lover: “Signed the papers yesterday/ You came and took your things away/ Moved out of the home we made/ And gave you back your name.” Although it presents itself as the beginning of a spectacle, star-crossed doesn’t pander to gossip. Instead, making the listener part of her tragedy is necessary to its catharsis, as she’s pointed out. She respects her past relationship and doesn’t let this album fall into a voyeuristic eeriness.

The album’s finale is an avant-pop take on Nueva Canción Chilena classic “Gracias a la Vida,” penned by Violeta Parra, made famous by Mercedes Sosa and covered by Joan Baez. Although it’s abrupt to end with a song that fronted a socio-political movement, it’s an apt close for Musgraves’ tragedy. Solely accompanied by acoustic guitar, Musgraves’ vocals command attention while declaring her gratitude to a life that’s allowed her to travel until her feet are sore, distinguish good from bad, and have a body with a “heart that shakes its frame.” Her voice maneuvers through a radio frequency, changing shape with each verse. For its final lines, it’s as if she’s a cyborg singing in a church. It’s not death or heartbreak that makes for a great tragedy, but the emotional rejuvenation captured in an artist’s voice when they finally find catharsis. Star-crossed reminds us that there will be periods of pitch black, and moments engulfed in halos.

The charm of Musgraves’ latest album isn’t in the witty wordplay that she’s employed in the past. Its brilliance comes from her struggling to let go of a romanticized sense of magic. Even though her songwriting is straightforward, there’s still cameos from angels and UFOs — and the accompanying feature film adds another layer of whimsy. “I’ve seen fire burning in the sky/ Things that I can’t explain,” goes one line on “Keep Lookin’ Up.” This isn’t only referring to other beings that exist galaxies away, but to love’s unknowable qualities. It’s similar to the magic she found on “Oh, What a World.” But in the star-crossed universe, it’s painted with the painstaking awareness that sometimes, magic is incompatible with human realities.

Recently, Musgraves said that blaming it on the stars almost felt like a weight lifted. But in the sparse album highlight “Angel,” she fantasizes about being the savior of a relationship, a perfect resolution. “Everything would be better/ I’d never have to change,” her silvery vocals coo. Part of this sentiment feels somewhat cruel — an eternal stagnancy and inability to evolve. And, angels still have the ability to fall. Thankfully, Kacey Musgraves isn’t an angel, and star-crossed is further testament that she doesn’t need the sun to shine for her.

Kacey Musgraves’ star-crossed is out September 10, 2021 via MCA Nashville and Interscope Records.