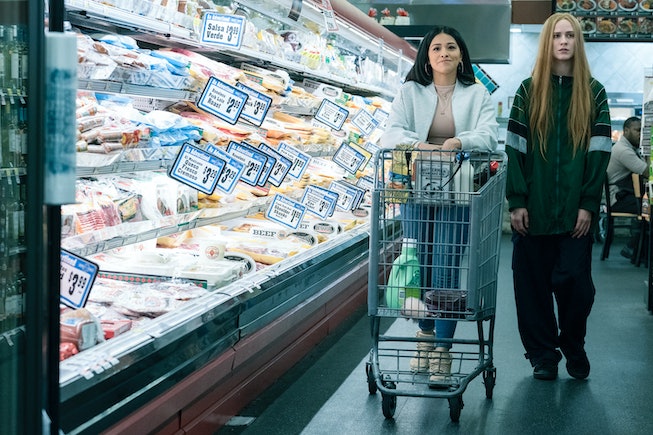 The first trailer for Kajillionarie, a comedy from writer Miranda July featuring Evan Rachel Wood and Gina Rodriguez, has arrived, and you can be part of the release process. Ahead of the film's September 18 release date, July is turning to fans, inviting them to become part of the film's promotional rollout.

On the day before the trailer's debut, July revealed that she had approached Focus Features with an unusual request. "Usually when a new movie comes out various VIPs and “tastemakers” are enlisted to announce and promote the movie, help make it special," she wrote. "But that was back when there was a usually. Guess who has made things special for me the last few months? The 189k people following this account. So I asked @focusfeatures if we could put the trailer in a dropbox and give it to you, my IG followers, to announce."

She confirmed that the studio had agreed to her plan, and when the trailer was released on Thursday, July 30, at 8 a.m. PST, a dropbox of materials went live. "I'm promoting Kajillionaire this way because the normal systems are falling apart and it’s scary and hard to know where to put your faith," she said. "My instinct is to put it in lots and lots of smaller communities. So this is both a practical experiment and a symbolic gesture: I think this is where we are headed and what will sustain us. Each other, inventing. (And...you just try things as a form of living.)"

With the trailer's release, July admitted that it's impossible to know whether the film might ever play in theaters, but she invited followers to be ambassadors for the film. Those who wished to share the clip were invited to use the #kajillionaire hashtag, and as of Thursday afternoon, many had participated.

Although viewers will have to wait until September to get a full glimpse at the film, social media support seems to indicate that this first peek is resonating with future audiences. The trailer introduces you to Wood's character, Old Dolio, the only child of two con-artists.

Old Dolio has spent much of her life aiding her parents in grand schemes, and their latest plot involves fooling a kind stranger (Rodriguez). All seems to be going to plan until Old Dolio finds herself forming an unexpected bond with Rodriguez.

Check out the first trailer for Kajillionaire, below: