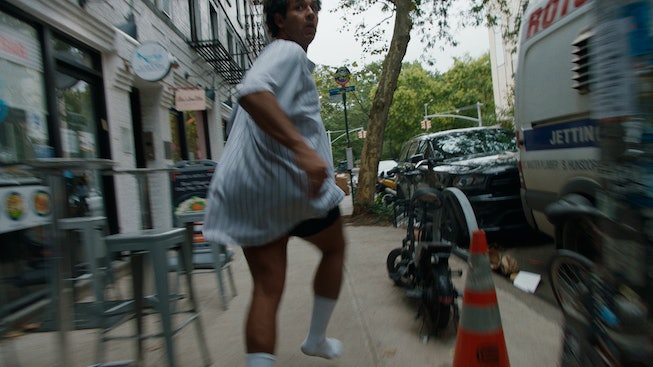 If there’s one thing all New Yorkers know, is that it’s damn near impossible to find a public restroom in the city. The 8 million strong metropolis has some of the fewest public bathrooms per capita of any large city in the US, per Gothamist, and various organizations, politicians, mayoral candidates, and grand plans to fix the broken system have often fallen through over the years.

The exact causes of NYC’s lack of places to go — and the unlikelihood the issue being solved anytime soon — aside, there’s creative inspiration to be found in the situation so many New Yorkers often find themselves in. Out Of Order does just that, finding the humor in the situation and celebrating the unique cast of characters that can only be found in New York.

The short marks the narrative directorial debut of Nicolas Heller, also known as @newyorknico, the “unofficial talent scout of New York City.” Heller’s Instagram famously features the most eccentric and lovable characters of NYC, many of whom make appearances in the film, which stars its writer, Kareem Rahma. (Rahma is himself a comedian and digital executive known among NYC circles and beyond).

Together, Rahma and Heller came together to create the story, in which a 30-year-old man on the way to a date (Rahma) finds himself in desperate need of a bathroom. As he makes his way across the city in search of one, he runs into several of these iconic NYC figures, including: Wayne Diamond (the fashion designer known for his performance of himself in Uncut Gems), Big Time Tommie, Tiger Hood (NYC’s famous street golfer), Derrick Beckles (Hot Package, Mostly 4 Millennials), Gorilla Nems of “BING BONG” fame, Matthew Silver, Lauren Servideo, Yo Chill, Slik Nik, Ken Starz, Tommy The Nose, Sydnee Washington, Lil Mo Mozzarella, Crimefaces, Mr. Throwback and more. There’s something for everyone, New Yorker or not, in this laugh-out-loud love letter to the city.

NYLON caught up with Heller and Rahma ahead of the Tribeca Film Festival premiere of Out of Order to chat about the short, working with NYC’s greatest denizens, and where the best bathroom actually is.

How did you come up for the concept of the film?

Heller: It’s loosely based on a true story. I had the concept, knew how I wanted it to end, and knew I wanted all my “characters” to make an appearance, but I didn’t know how to flesh it out. So I reached out to Kareem and he helped bring it to life.

The film has an amazing cast of NYC characters. How did you decide who to include?

Rahma: I was already very familiar with many of the characters from the NCU (Nico Cinematic Universe), and when Nico pitched the story saying that he wanted to cast the film with people from his page, it was a really simple casting process. I pretty much watched videos from his page and wrote beats and plot points around their personalities. It was a really fun way to write the film, because all of the situations are really based around the characters themselves. Nico always had great feedback and ideas that he brought back to the table and I would write them in. It was a very collaborative process.

What was one of your favorite memories on set?

Rahma: Honestly, this was one of the most fun sets I’ve ever been a part of. It was so much fucking fun. There are too many great moments to choose from but I think a highlight for me as an actor was the limo scene with Big Time Tommie and Wayne Diamond. We had an absolute blast in that limo.

Heller: I would agree that the limo scene with Kareem, Big Time Tommie and Wayne Diamond was the most memorable. A lot of the best lines were improvised on the spot so I was constantly running and laughing my ass off.

What was the most challenging part of making your first short?

Heller: I think the most challenging part was trying to figure out how to make something on such a small budget. I’ve been spoiled the past few years making commercials with pretty cushy budgets, so this was humbling.

What do you hope audiences take away from the film?

Heller: That we need more public toilets in NYC.

Do you support the proposed bill to install more public bathrooms in NYC?

Where's the best bathroom in NYC?

Heller: That information is gonna cost ya!

Rahma: It depends on what you’re doing in there.