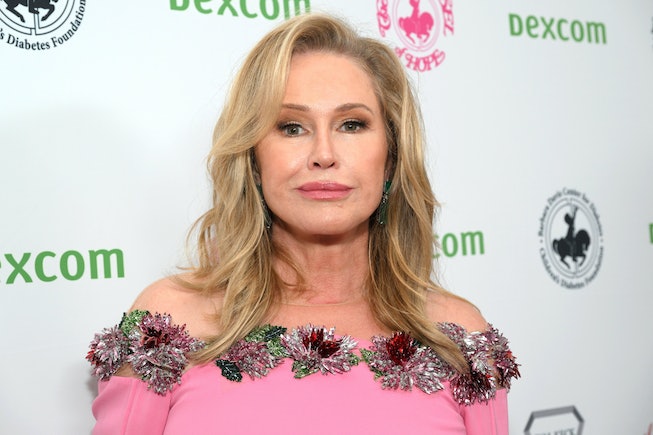 On October 14th — a crisp, sunny fall Friday — a line of fans snaked around the massive Javits Center in midtown Manhattan for NCBU’s second annual BravoCon. “What is this?” my Uber driver asked, bemused by the hoards of (mostly) women and gay men lined up to mingle with their favorite reality TV stars in the flesh. While Bravo has always had its diehard fans, all the extra time people had during lockdown seems to have caused a renewed interest in the NBC network’s slew of unscripted series and over-the-top cast members. The second annual event is a marker of this, with over 30,000 people attending the three-day convention filled with panels, photo opps, novelty merch, and themed booths.

I was there to interview Kathy Hilton, specifically, whose second season on The Real Housewives of Beverly Hills has been met with more enthusiasm than some sports seasons. Whether Hilton’s portrayal of an absent-minded, out-of-touch (but benevolent) housewife who wears house slippers to the airport and doesn’t know what basic idioms mean, is genuine is largely beside the point. In contrast with the styled, glammed, and catchphrase-ready model more recent housewives have adopted, Hilton comes across more like the women of earlier franchise seasons, living in her bubble of a world as cameras happen to be there, rather than seeking out the limelight.

She’s also been the focal point of Season 2, culminating in a cast-dividing feud between herself and RHOBH stalwart (and now villain), Lisa Rinna. Whether that has anything to do with the fact that she was running so late for her 11:30 a.m. interview slot is something we will never know. As I headed down the fluorescent-lit hall toward the press room, gaggles of fans raced passed me, trying a locked conference room door before a jaded-looking security guard said, “Teresa? That way,” and pointed down the hall. I briefly considered dipping in for a quick photo with the reigning queen of Real Housewives of New Jersey, but didn’t want to be late for Kathy. As I waited at a press room round table with the other reporters clacking away on their laptops, dressed in the widest possible range of outfits — from leggings and T-shirts to full glam and cocktail dresses — I watched Andy Cohen deftly field the same questions over and over again in rapid-fire response before improving several soundbites for different outlets’ social channels. “What’s so great about the Housewives,” Cohen tells one reporter, “is it allows you to judge other friend groups.”

Around noon, I kept waiting for Kathy as Frankie Jr., the dashing young son of RHONJ star Dolores Catania, rehashed the old drama between his mother and other cast mates for another reporter sitting at my table. Soon after, Gia Giudice, daughter of Teresa, answered questions about taking the LSAT, launching clothing and jewelry lines, and whether she’s going to get engaged to her boyfriend, who was watching silently from a few feet away (she’s not). She, too, noted a spike in fandom following the pandemic, saying she gets recognized more since people had time to watch old seasons of the show, which began filming when the 21-year-old was just a child and captured major milestones like her parents going to prison (and divorcing), and her prom.

It was about 1:00 p.m. when Julie, the kindest publicist in the world, gently let me know that Kathy wouldn’t be arriving until 4. Here’s roughly how the rest of the day went:

1:05 p.m.: Briefly consider leaving and seeing if Kathy can do a phone interview later.

1:07-1:20 p.m.: Wander the massive, sprawling space of the Javits Center, with acoustics akin to that of the loudest school cafeteria you’ve ever been in, filled with tens of thousands of people. Occasionally, waves of cheers rise up over the crowd as some Bravolebrity makes an appearance, but I’m too short to see who it is.

1:25 p.m.: Find a spot on the fringes of the Don’t Be Tardy Stage for the packed “Thrills In Beverly Hills: Presented by TRESemmé” panel, which is nearly canceled after the crowd rushes to get seats.

1:30 p.m.: Most of the cast of Beverly Hills — Kyle Richards, Sutton Stracke, Garcelle Beauvais, Dorit Kemsley, and Crystal Minkoff — are greeted by the thousands in the crowd (including the many of us in standing room), with cheers. Then, Lisa Rinna makes a surprise appearance in a neon orange suit and matching heels, channeling her viral M&M meme. She is loudly booed by the crowd, who she then flips off with a smile. I immediately think of the WWE, which has been compared to the Bravo Universe before, and which Rinna later referenced in her Instagram photo capturing the moment, captioning it, “Highlight getting booed at Bravo Con! @wwe here I come.”

1:33 p.m.: Erika “Jayne” Girardi is also booed by the crowd, but perhaps it’s more expected, because it garners fewer headlines.

2:00 p.m.: Halfway through the panel, I try to beat the rush to the bathrooms, which, squeaky clean this morning, are now overflowing with paper towels on the floor and half-drank plastic cocktail cups littering the counters. What started as men and women’s bathrooms have now become gender neutral as women seem to outnumber men by at least 2 to 1. I wait for 15 minutes behind a boozy group of friends who debate whether Rinna is a villain (she’s not, they decide). Eventually, the men begin bypassing the line to use the urinals. Everyone’s gay and we’re all friends.

2:30 p.m.: Grab a boxed Caesar salad for press with no dressing, and end up just eating the accompanying bag of Lays, one of BravoCon’s sponsors. Eventually, Rinna and Erika Jayne enter the press room and reporters rush to line the blue carpet to get their quotes.

2:40 p.m.: Rinna, fresh off being booed, makes her way through the TV interviews, giving increasingly shorter answers. By the time she gets to the group of online-only outlets bunched together at the end of the carpet, she holds up a manicured figure and says, “One question each. Let’s do this. Let’s be quick.”

2:42 p.m.: “There are calls for you being fired, how do you feel about that?” one reporter fires off. Rinna can barely hide her annoyance, answering, “How am I supposed to feel about that?” Then, she nearly storms off the carpet, saying, “Okay, we’re done,” and someone half-jokes to the reporter, “You just ruined it for all of us.”

2:43 p.m.: She does grant one last interview to a reporter wearing leggings with Andy Warhol-style Rinna portraits printed up and down the legs. I overhear her saying, “The best wrestlers got booed. The Rock got booed.” She brushes it off before disappearing out a back door.

2:46 p.m.: A publicist pulls me over to Erika for one last question. “Is there anything you would’ve done differently this season?” I ask. “Yes, do not mix antidepressants and alcohol,” she says. “It’s bad.”

2:50-4 p.m.: Simply wait. The buzz in the press room, palpable all day, slowly starts to die down. Tip sheets covered in Bravolebrity faces and bios litter the floor, and TV crews start to slowly pack up their equipment. I begin to wonder if Kathy will arrive at all. Even if she doesn’t, the day has been worth it.

4:05pm: Julie, the kindest publicist in the world, touches my arm. “She’s here, come with me.” Julie leads me to the front of the carpet, right after the first TV spots, in between an empty AP spot and GLAAD. I can’t believe it’s actually happening. All this, for two questions, but I’m thrilled.

4:10 p.m.: The reporter from AP shows up. He tells me at 63, he’s “the oldest working man in showbiz,” and tells me his nieces helped him come up with the questions. He shows me a question he plans to ask written on his phone. “They just send me this stuff, our regular guy is off today so I’m a one-man band,” he says.

4:20 p.m.: By the time Kathy makes her way down to me and AP guy, I realize he’s hustled us all. Quickly, he begins lobbing questions harder than any I’ve heard all day. He asks her, given her decades-long friendship with Kris Jenner, what her thoughts are on Kanye West’s recent outbursts. “I think he needs professional help,” Kathy says, before wondering aloud, looking at me, “Was that too mean?”

4:21 p.m.: Her publicist assures her it was fine, and says, in that publicist way, “Thank you,” to the AP reporter, which doesn’t mean thank you, but rather, “We are done here and if you don’t stop asking questions I will kill you.” Finally, it’s my turn to talk to Kathy.

4:22 p.m.: “What’s the biggest lesson that you learned this season,” I ask her. “The biggest lesson is that, I think that I assumed we’re all really friends. I felt like I was part of a special girls club. Once we all got together in the pandemic, you couldn’t do anything, you couldn’t go out, we got to dress up and go on trips and stuff. I had people say to me, ‘Kathy, don’t be so trusting. These are people you work with. They’re colleagues. They’re not all your friends.’ So I think that’s what I learned.”

4:23 p.m.: I end with the same question I asked Erika, and would have asked Rinna if I’d had the chance: “What would you have done differently this season?” She answers, “I always feel that I would not have done anything differently. I said what I felt. And it wasn’t what you all heard.”

4:24 p.m.: Kathy is gently guided by her publicist down the carpet to GLAAD, and I move out of the way for their on-camera spot. Back at my round table, I tell my update-weary coworkers on Slack that I finally talked to Kathy and am heading back. Electrified and exhausted, I make my way down 35th Street to Penn Station, hopping on the A train home to catch up on some Bravo.