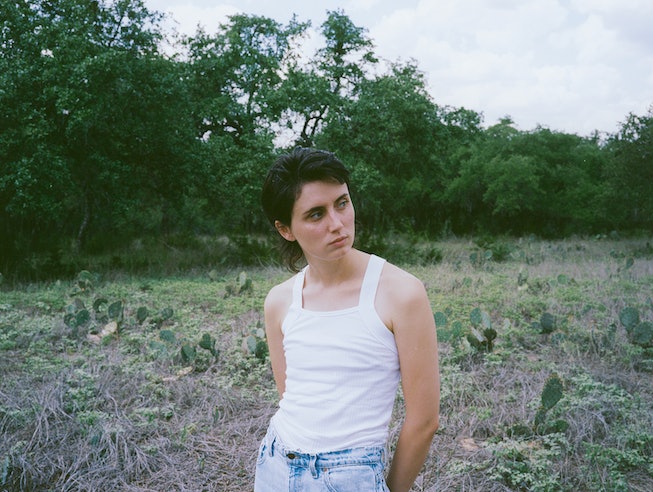 Texan singer-songwriter Katy Kirby got into music the way many Southern small-town kids do: through playing in her local church’s worship band. It was a low-risk gig, largely because “a 13-year-old bass player who barely knows what she's doing is kind of acceptable when it's just worship music, because it's for Jesus,” she explains with a laugh over the phone one recent afternoon.

Still, her time there proved to be formative. Looking back on it, Kirby — now 25, and who crafts a clear-eyed strain of folky rock — sees a connection between the music she listened to and played then and the sturdy melodies of the songs she creates now. “There's probably something going on there, just having been raised with [worship] songs that were written to be that accessible immediately,” she says.

While Kirby's songs don’t sound anything close to overt Christian music, their assertive melodies still cling to you in the same immediate, intimately familiar way. The nine tracks on her stunning debut album, Cool Dry Place, released this past February, are full of spry guitar riffs and softly searing lyrics that loosely reference a falling out with her religion and finding belonging, now that she’s on her own. On the title track, she simply longs for a “cool dry place,” as the song slowly devolves into a staticky mass of distortion and guitar feedback. It’s some of the best indie rock we’ve heard this year.

Calling from a temporary home in Illinois, Kirby spoke to NYLON about what it was like playing worship music, easing out of her spirituality, and why she hopes her music can be “a gift of some kind.”

How was growing up in Austin, Texas? When did you start getting into music?

It felt a little bit isolated at the time, just ‘cause I was homeschooled and we lived sort of outside of Austin, like 30 minutes. We had friends and stuff but it was a lot of being at home and doing school and reading and stuff. I'm sure that isolation allowed time to sit around and write in my little child journal.

I think the way I got into music primarily was I started playing bass for my church's worship band when I was like 13 because, a 13-year-old bass player who barely knows what she's doing is kind of acceptable when it's just worship music because it's for Jesus. [Laughs.] So the candidates are more flexible? That was the first time I played in a band setting at all. It was a really weird and fun place to learn to be in that format. Also, I was obviously the youngest person in that band by like, 25 years at least. So I wound up discovering a lot of bands through a couple of people who were like my friend's parents who also played in the worship band and were like, "Go listen to Peter Gabriel or Sufjan Stevens" or whatever.

Does that mean growing up you were mostly listening to Christian worship music?

I mean, until I got an iPod Classic when I was 12 or 13, and started buying things on iTunes completely at random. I pretty much only had been exposed to literal worship songs or the strain of Christian singer-songwriter that I think was emerging around that time? Which is like, sort of similar to worship music but a little bit more songwriter-y, if that makes sense. Or very narrative-oriented, which is kind of fun. Wouldn't have really listened to rock music without any regularity until I was a teenager.

Do you think your time in a worship band informs the music you make today?

Making the record really was a process of discovering what I wanted to sound like. Because I so deeply didn't know what I was doing, it was really a process of learning to trust the little voice inside me that says, "That sounds cool," or "That doesn't sound cool," and defending it.

I think, the way that evangelical Christian music would have wound its way into Cool Dry Place, would probably be, I wanna say, the melodies. I think Sufjan Stevens has some weird quote about really solid or sturdy melodies that hymns or Christmas songs retain [over the years]. So I think there's probably something going on there, just having been raised with songs that were written to be that accessible immediately. Surely it's doing something. I don't know.

How did these songs come together? I read some were written quite a while ago.

I do write songs pretty slowly. Those were really all the good ones that I had at the moment, from the past few years. They are cohesive lyrically in the sense that I was growing up over that period of time, I guess.

When all the songs were written definitely does coincide with me sort of easing out of the type of spirituality I was raised in. And just sort of unlearning a lot of things. But, other than a very, very vague coming-of-age, of some kind — I didn't set out to do that for sure.

You say you were “easing out.” Would you still consider yourself spiritual?

Yes. I think, one of the best things that I've retained, from growing up in the church and from sort of assenting to things that feel so intense to me now, or coming from a place where I literally tried to cast out demons at some point in my life, I think the best thing that I've walked away from all that with is a generous agnosticism. I really do understand how someone can wind up doing things that seem insane, like out of a place of religious belief.

I'm very interested in how people connect with the world in that sort of spooky way, that has a whiff of the divine about it. The last time I've been to anything like church has been Quaker meetings. I don't know if you know how those generally operate but those are super peaceful.

Are those the ones that are in Fleabag?

Yes. Yes. Those are amazing. I'm not a part of a community by any stretch of the imagination, but when I feel like a church-flavored morning sounds like a good idea, I will occasionally go to the Friends meeting — that's what they call it in Nashville. People don't usually say anything all that specific or weird.

The title track, "Cool Dry Place," is one of my favorite songs on the record. What was your thought process like in adding that instrumental section? It feels almost like a cathartic release.

Absolutely. I think, so I would've added that to the song while I was demoing it with Logan Chung who co-produced "Cool Dry Place." I don't remember a ton about how we constructed the song at the time, but I do have this very vivid memory of driving down a road called Gallatin Pike in Nashville, and he showed me the demo of that that he'd been tinkering with. And he had that, basically a mock-up of that part really fully fleshed out in that song and it made me cry in the car. And it just felt really right, and it felt like it was something that would maybe allow a listener to take a breath of their own. Like a big wide spot for someone to maybe imbue it with their own meaning or feeling or whatever. But yeah, it just felt like it was giving people a space for a second, and that felt really cool and lovely, so yeah.

Do you usually try to take into consideration the listener when you’re creating songs?

I've found that to be a really tricky thing to balance because you can't write a song if there's a crowd of people standing in front of you even in your head. That's very hard to do. Some songwriters I know seem really good at blocking out ideas of what a song might mean to other people and they really are writing for themselves and just letting people in if they want to be let in. And then some people are really generous songwriters in a way, where they are writing a song for a lot of people instead of for themselves. That almost seems like a more traditional way of writing songs. Like Jackson Browne isn't necessarily pouring his heart out but he's writing stuff that people can get down to.

Where do you see yourself?

Exactly. That's the trick. I don't know. I think the way that I have to construct songs is starting out in a place where I feel very alone with a song, and then as I expand it from whatever part I had initially, and especially as I edit it, to try to be as generous as I can without being heavy-handed, of course. To make a song that hypothetically could be a gift of some kind or helpful, maybe, hopefully. Fingers crossed.