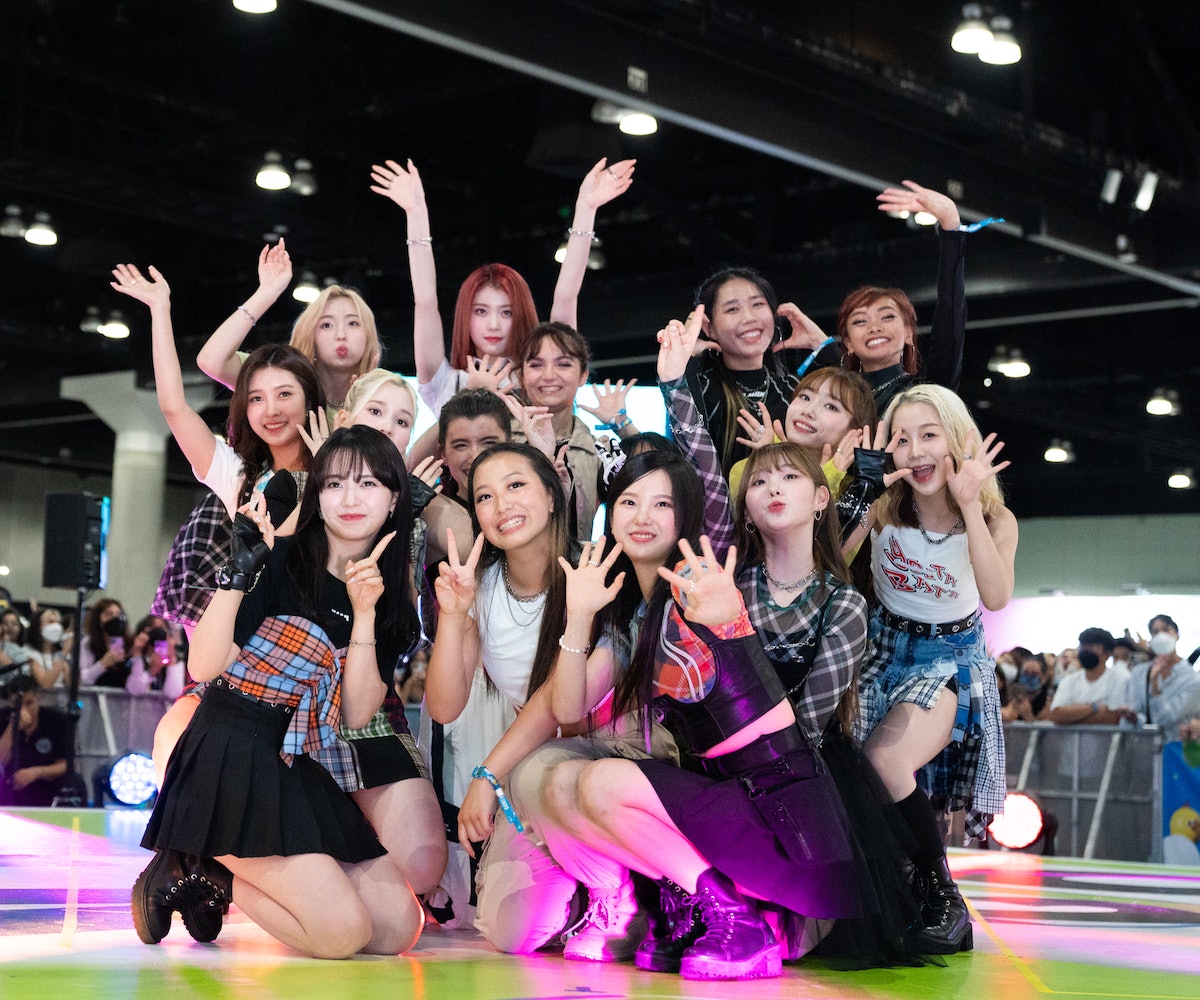 “It was definitely worth it. Worth the 2,200 bucks,” laughs Larry Zheng. The 20-year-old attendee is referring to the Prestige tickets he bought for the largest Korean culture and music festival in North America — KCON — which took place on August 19-21 at the Los Angeles Convention Center and Crypto.com Arena. A self-proclaimed “JYP Nation fan,” Zheng mostly came to see girl group ITZY, but his top-tier purchase granted him full access to the three days of convention. Alongside preferred GA spots for the two nights of concerts, Zheng also scored meet and greets with all of the performing artists, red carpet attendance, exclusive merchandise, and many other benefits. “It was the best experience of my life,” he says.

K-pop often speaks a language of exuberance. The genre is known for its vibrant visuals, dozens of tempo changes, intricate choreographies — and KCON drinks straight from that bottle. Over the course of the 2022 event’s three days, the convention floor held a sundry of food, beauty, and merchandise stalls, as well as dozens of panels, workshops, games, and activities like Selfie MV recordings, where fans could participate and interact with their favorite idols. Attendees, ranging in age and background, sported basic jeans and tees to full-on music video-inspired outfits. With over 90,000 people in attendance and a total viewership of 7.17 million through its online streaming, KCON 2022 L.A. wrapped up a weekend filled to the brim with K-pop’s magic.

This was Zheng’s first KCON, but 2022 marks the tenth anniversary of the long-standing event. Founded in 2012 in Los Angeles by South Korean entertainment company CJ ENM, KCON has since expanded to countries like Japan, Mexico, and Australia, thanks to the Hallyu (Korean wave) boom in global popularity over the last decade. Beginning as a 1-day event for U.S. K-pop fans to see their favorite bands live, KCON has morphed into a weekend-long extravaganza.

Former U-KISS member and actor Kevin Woo, 30, who has participated in the event since 2017, first as a performer and now as a special guest and host, says that KCON was initially focused on the culture around K-pop and its idols, but has now expanded to cover other aspects of South Korean life.

“There’s panels with K-pop producers, or people who trained in K-pop, or foreigners and [members of] the LGBTQ+ community who are interested in being in Korea, how that is like,” he says. “There’s just so many different topics that people can learn about and really immerse themselves in.”

“When we came to America and did our first tour [in 2014], it was mostly [people in their] 20s, 30s, 40s,” adds Woo about the other notable change he’s noticed about the event. “But now you can see high schoolers, middle schoolers, even toddlers with their parents. The age demographic [has] definitely changed.”

In the case of Karen, 51, and her daughter Zoe, 7, the two drove from Orange County, California, to witness the festival. While the concert is too late for Zoe, they will still try to catch a glimpse of STAYC — her favorite group — on the convention floor. “I think it’s a good event to get to meet another part of the world,” says Karen, who attended the past four editions of KCON. “Music is a universal language, right? It brings all the generations and all the ethnicities together.”

Although many fans come just for the convention, the event wouldn't be complete without the crowning jewels: live performances by some of the biggest and most promising artists in the current K-pop landscape.

On Friday, the KCON Rookies stage welcomed rising acts Lightsum, Cravity, STAYC, and TO1 before they embark on a six-city tour across the U.S, while Saturday and Sunday evenings were capped by performances from established names like Ateez, Stray Kids, WJSN, NCT Dream, Enhypen, and LOONA.

After two years of mainly online activities due to the pandemic, some groups were still surprised when they realized how appreciated they are overseas. Boy band TO1 — who performed at KCON for the first time in 2019 as trainees for Mnet’s survival show To Be World Klass — remarked that they made fans during that first visit to L.A., and were able to recognize those same faces in the crowd when they performed at the KCON Rookies stage on Friday.

“K-pop really does bring together many people and makes us one.”

“It means a lot to us, we never thought that we could make fans in other countries, but we did it. It was really touching,” says TO1’s 21-year-old rapper, J.You. The group’s leader, Jaeyun, 22, adds that KCON is like their best friend, or even family. “We were in every KCON since our debut, so everything is a great memory to us.”

Cravity’s main dancer and rapper, Allen, 23, shared some of the same feelings. When he introduced himself to the audience on Saturday, right after performing the smooth “Adrenaline,” he claimed it to be a full-circle moment. In 2018, he attended KCON as a fan and hadn’t been able to return until now — as a performer.

“My mom, my brother, and my friends from school are all gonna be here, because I’m from L.A.,” he says hours before hitting the stage, eyes bright with excitement. For fellow member, vocalist Minhee, 19, streaming Seventeen’s performance of “Very Nice (아주 Nice)” at KCON 2017 was one of the moments where he thought, “I’m gonna be a star, I want to be there.”

Yeseo, the 17-year-old maknae (youngest member) of girl group Kep1er, had similar inspirations. “It was my dream to be on a KCON stage because I used to watch them on YouTube,” she says on Sunday, the morning after the group’s blazing performance. For Kep1er’s main vocalist Chaehyun, 20, their Saturday performance was extra special because they took part in Dream Stage, the audition-based activity where select fans were able to go on stage with the group and perform their debut single, “Wa Da Da.” (On Sunday, LOONA performed “PTT (Paint the Town)” on Dream Stage with fans.) “[KCON] is the only place where we could do that,” says Chaehyun. “Maybe more fans could join us next time, so we can enjoy it even more.”

That night, Kep1er also covered “La Vie En Rose,” the debut song of the now-disbanded girl group IZ*ONE — Zheng’s ultimate favorite group. “I really regret not coming to the 2019 KCON,” he says. “You can’t see, but my phone screen right now is still [a photo of] IZ*ONE, they were here in 2019.” Zheng says that he had tears dripping down his cheeks while recording Kep1er’s performance. “That’s not what I usually do, I’m not really a sensitive person, but it just reminded me of all the good times [the fandom] WIZ*ONE and IZ*ONE had together. That night I was especially missing them.”

Zheng’s experience is just one of many showing the transcendent and enduring power of an event like KCON. While its biggest strength is still bringing to life experiences that most overseas fans wouldn’t otherwise have, sometimes just feeling seen there is enough, something that goes both ways. Jonny Lim, 28, a Korean translator working at the event, noted the importance of the event for fans but for artists as well: “It’s so important for the artists to see all the reach.”

“During the pandemic, when we could not see our fans, sometimes I lost the meaning of why I do this job, why I go on,” says TO1’s Jaeyun. “But now I don’t have any thoughts like that.” His bandmate, dancer Kyungho, 21, agrees, saying that being on stage “gives us a touching feeling of being the main character for our fans, and of wanting to be [there] more and more.”

Cravity’s leader, Serim, says he spotted one attendee wearing the exact same outfit he once wore to the airport, and others wearing the red varsity jackets from the music video for their song “Adrenaline.” For him and his bandmates, seeing fans dressing up as their favorite Korean artists, wearing traditional Korean clothes, eating Korean food, and trying out K-beauty products only drills home the fact that K-pop’s global reach is astounding.

“I just feel like that’s what makes [KCON] so special,” Cravity’s Allen says. “K-pop really does bring together many people and makes us one.”