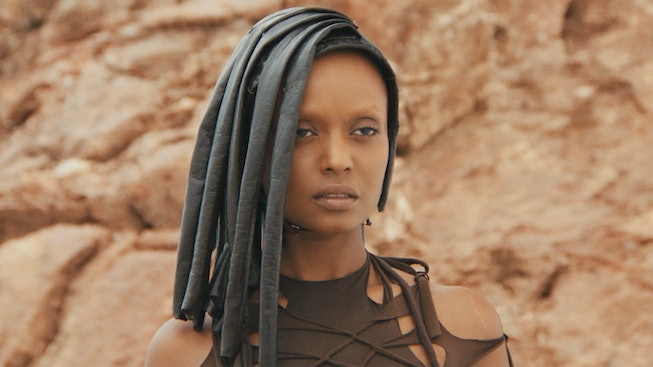 For the last five years, the question everyone’s been asking is: Where the heck is Kelela? After dropping her acclaimed debut album, Take Me Apart, in 2017, the cult left-field pop artist suddenly and seemingly vanished. Her social media dispatches grew more infrequent and there was certainly no word of new music to be found — until a few days ago, on Sept. 10, when she suddenly resurfaced online with self-aware videos joking about her absence. “KELELA WE NEED YOU!!!!! WHERE ARE YOU????,” they stated, hinting that finally, something new may be on the way.

Now, that something new is here. Kelela has released the languid and atmospheric “Washed Away,” the singer’s first new music since 2017 — and a promise of more to come.

“A B*TCH IS BACK and feeling v [recharged] after my hiatus. please TRUST the bangers are on the way. but first: how’s your heart?” she announced on social media with the fountain emoji.

In classic Kelela fashion, the new Yo van Lenz-produced track moves through you like a wave or gust of wind, all rushing, languid synths and the singer’s own intoxicating, siren-like vocals. There are minimal lyrics to be found; everything’s centered around the lines, “I’m far away/ far away/ washed away,” and her own slippery vocalizations. Despite it’s nearly four-minute runtime, the song’s unhurried pace, and the fact that it doesn’t really ever build to anything, grants it an intense interlude energy, like she’s preparing us for bigger things ahead. In a moment when all new releases seem to be committed to one-upping its previous, it lands like a much-needed reprieve, a moment to relax, linger, and settle into the music.

“I love a banger, but for the first point of contact out of my hiatus, it felt more honest to lead with an ambient heart-check,” added Kelela about the track in a press statement.

The singer also shares an accompanying music video directed by Yasser Abubeker which finds her amid the elements in the beautiful and arid land of Ethiopia’s Danakil Depression. In the video, which largely highlights the beige cracked Earth of the region, there are scenes of Kelela with a shaved head) floating in an emerald pool, atop craggy mountain peaks, and walking across an expanse of white sand.

Per a press statement, she chose the location for more than its otherworldly beauty: “I specifically want to speak to marginalized Black folk and highlight the work we do to find renewal in a world that’s built to make us feel inadequate. This song is the soundtrack to the relief we find after going inward.”

With “Washed Away” finally here, it’s only a matter of time before more music follows. As we stay tuned for what’s next, hear the new song below.