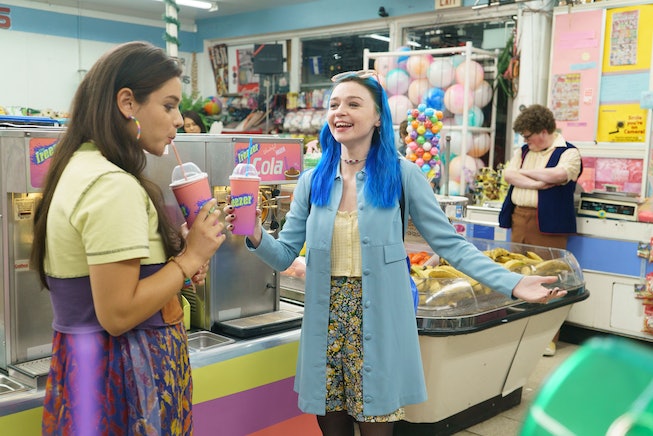 In Pink Skies Ahead, author Kelly Oxford’s feature-length directorial debut, lead character Winona (Jessica Barden) starts to have a panic attack in the middle of a job interview. Standing at the counter of the boutique she’s hoping to work at, Winona inexplicably picks up a tube of lipgloss, puts it on, pockets it, and then passes out.

When her mother (Marcia Gay Harden) comes to pick her up, her judgment of the situation only amplifies Winona’s distress. It’s a dynamic that surprisingly many will be familiar with, as diagnosed anxiety disorders and mental health issues are on the rise, especially among young people. Part of MTV’s newly launched Mental Health Is Health initiative, Pink Skies Ahead follows Winona as she grapples with an anxiety disorder diagnosis after she drops out of school and moves in with her parents in 1998 Los Angeles.

Based on “No Real Danger,” an essay from Oxford’s second book, When You Find Out the World Is Against You, the film draws on Oxford’s experiences, as well as the universal wrestling with identity that everyone faces to some degree.

“Pink Skies Ahead is loosely based on events that occurred when I was nineteen years old,” Oxford says. “It is a manifestation and reckoning with my own anxiety struggles. Purely out of self-protection, I’ve spent my life creating a firmly independent exterior surface that does not reflect my inner turmoil or compulsive and obsessive worried thoughts. As a 42-year-old woman, I’m still grappling with shame and denial of my own inner workings as an anxious person. The catharsis of writing and directing Pink Skies Ahead was a huge step in accepting myself. And I hope our film helps others feel less shame in their ‘not normal’ feelings than I did.”

NYLON talked to Oxford ahead of the film’s Saturday, May 8 premiere on MTV to chat about casting Jessica Barden, translating an essay to the screen, and why talking about things is the best antidote to shame.

How did you begin translating the essay that inspired Pink Skies into a screenplay?

It was an essay from my second book. When I was touring for the book, promoting it and meeting the readers, I noticed that a lot of them, the majority of them, when they would talk about the book, they would talk about that specific essay and say how much it meant to them, and that they could relate to it so well. It was just person after person. I've written a few scripts, and I was trying to find a new idea, and it just occurred to me that essay would probably make a movie that also would connect with a lot of people and make them feel better. So I wrote the script and really wanted to direct it just because I could see it and picture it as I was writing it. Stampede Ventures decided to take it on and let me direct my first movie.

The casting of Jessica Barden was just so perfect.

Oh my gosh, she's amazing. I saw her in End of the F*cking World and just love her energy. She's just such a dynamic force on screen and even on Instagram. We had actually been DMing each other and I didn't even realize it was her. When I did realize it was her, I thought, oh my God, I should just send her the script and see if she even likes it, or can relate to it. She read the script over a weekend and got back to me and said yes. Then all of the other actors in the movie, I mean, they were all pretty much my first choices and they all gravitated towards the script as well for their own personal reasons. The cast, I think, did such a great job on screen. Everybody really took to the material and I think it made a difference.

What was it like to step into a new role as a director?

I had to really build out the essay for a story on screen. So a lot of it is fictionalized with the autobiographical thread of going through this diagnosis. And being diagnosed with a mental condition and just like the initial reaction to it and the shame around it, trying to avoid it. All of those things I kept in, but I really did have to build out all of the characters a lot, which I found really, really fun to do.

With the story being set in the '90s, do you think it would play out much differently today?

People have so much more information today than when I was diagnosed in '98. There was nothing online that I could find about anxiety disorder, and panic attacks sounded horrific. I just had the information that my doctor gave me, what the therapist gave me and I felt very alone in it. Nobody in my family had a mental condition diagnosed. It was just like, a very alone time. I know that today there's so much support, and I was really hoping that this movie coming out today will help people who either think they have an anxiety disorder or have an anxiety disorder to feel less alone and to be encouraged more to seek out group or individual therapy.

Anxiety disorders are high among young people, and even more so during the pandemic — were you thinking about that when you made this film?

I wrote this in 2018, so I didn't know this crisis was going to happen, but I did know how rampant anxiety is. So yeah, I definitely just thought about all of the people that would be able to see it and feel connected to it.

If you were to give advice to young people that are experiencing things like anxiety disorders or mental health crises, what would it be?

Definitely to share your feelings — no matter how you're feeling. If you're feeling shame, if you're upset, talk about that. Talking about it releases so much of the anxiety about it, and you do feel a lot better when you do say those things that you're feeling about your anxiety. It really does release a lot of it. So not keeping it inside and acting out — the way the character, Winona, does just kind of go about her business and make some not so great decisions, because she's just trying to run away from how she's feeling inside and putting on all of these masks. And truly the thing that people have to do is talk to people who care about them.

Pink Skies Ahead premieres on Saturday, May 8th at 9:00PM ET/PT on MTV.