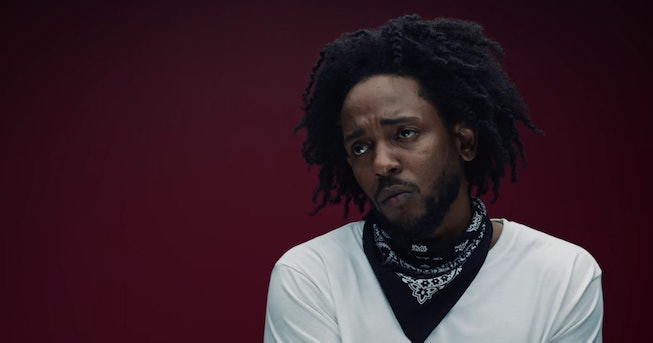 No one gets the people talking like Kendrick Lamar. After a few years of being away, save for a brief emergence in 2021 for a song with cousin Baby Keem, the illustrious Compton rapper returned on Sunday with his new song and video, “The Heart Part 5.” As the prelude to his highly-anticipated fifth studio album Mr. Morale & The Big Steppers, the song also continues his long-running “The Heart” song series — and is already stirring up a lot of discussion online with its uncanny music video.

If you’ve missed the hubub, the rapper experiments with deepfake technology in its music video, morphing his face into that of O. J. Simpson, Kanye, Jussie Smollett, Will Smith, Nipsey Hussle, and Kobe Bryant over the course of its nearly 6-minute runtime. (Deepfakes, if you aren’t already familiar, are videos based off existing clips of a person but whose face or body have been digitally altered so they appear to look like someone else. They’ve garnered a sketchy reputation, used typically in malicious circumstances like spreading misinformation.) While it was great sensational media fodder, to say the least, a close listen to the songs lyrics reveal that there’s more meaning to the faces he’s chosen to deepfake; they weren’t chosen at random. In parts of the song, Lamar appears to embody each of the men he morphs into, creating a dense and complicated audio-visual narrative that exemplifies the sort of complex storytelling the rapper is known for.

Lamar opens the video and song as himself, thanking his fans and remarking that as he’s gotten older, “I realize life is perspective.” He launches into the funky track’s detailed first verse, painting an intricate picture of inner-city life. “Desensitized, I vandalized pain/ Covered up and camouflaged/ Get used to hearin' arsenal rain,” he raps, topics he’s touched on throughout his career.

At the top of its second verse, he morphs into O. J. Simpson while rapping about “bulletproof Rover[s],” before quickly changing into Kanye West right as he delivers the lyric, “Friends bipolar, grab you by your pockets/ No option if you froze up, always play the offense.” (West has frequently talked about his struggles with being bipolar.) Next in the verse, Lamar morphs into the controversial actor Jussie Smollett in a curious passage recounting Lamar’s own experience finding out about Nipsey Hussle’s passing while he was in Argentina. While the connection seems random at first, Lamar remarks on the seemingly recurring cycle of rappers dying later in the verse: “History repeats again/ Make amends, then find a n*gga with the same skin to do it.” Smollett is still alive, but one could interpret his career definitely isn’t after his incendiary 2019 media cycle.

When he changes into Will Smith, Lamar raps, “In the land where hurt people hurt more people/ F*ck callin' it culture,” a line that can’t help but conjure a reference to Smith slapping Chris Rock at the 2022 Academy awards.

Morphing into the late Kobe Bryant, Lamar’s third verse shifts into a tone of reflection, speaking as if he’s recapping the accomplishments of his life: “Paid dues, made rules, change outta love/ Them same views made schools change curriculums.” But Lamar’s most poignant deepfake comes when he embodies the late rapper Nipsey Hussle, as his verse adopts the POV of someone who’s speaking to the world from the afterlife —“To my brother, to my kids, I'm in Heaven/ To my mother, to my sis, I'm in Heaven/ To my father, to my wife, I am serious, this is Heaven” — and ends on a plea for healing: “Look for salvation when troubles get real/ Cause you can't help the world until you help yourself.” The tone echoes the community-driven work Hussle was known for, and is one of the song and video’s most straightforward connections.

As fans have begun dissecting “The Heart Part 5” online, the biggest question is trying to understand Lamar’s intention behind the deepfakes in the first place. A simple, surface level theory can be derived from the video’s opening text which reads, “I am. All of us,” suggesting it’s some sort of commentary on a topic that’s shared by and connects all the people mentioned in the video. Having narratives that dominate the media, perhaps? Or, all of them sharing the ultimate goal of trying to be spokespeople for their communities, messing up but still trying to make change.

Online, fans interpretations vary, with one Reddit user hypothesizing that the song is all commentary on the way the media capitalizes and contributes to narratives of Black plight, writing: “all of [the deepfakes] are complex people who’s [sic] bad acts/controversy’s are used as examples to create racist caricatures of black people.” Others argue that there’s no one set answer, and Lamar is simply highlighting the nuance of perspective, as per the song’s opening lines. While that may seem like a cop out, it’s probably likely the closest to the truth: the deepfakes are a mix of tenuous connections and real statements Lamar intended to make.

There’s no definitive explanation for the reasoning behind the deepfakes, and knowing Lamar’s elusiveness in general, there may likely never be one. The only thing we can hope will offer more illumination is what’s left to still be uncovered on Mr. Morale & The Big Steppers.