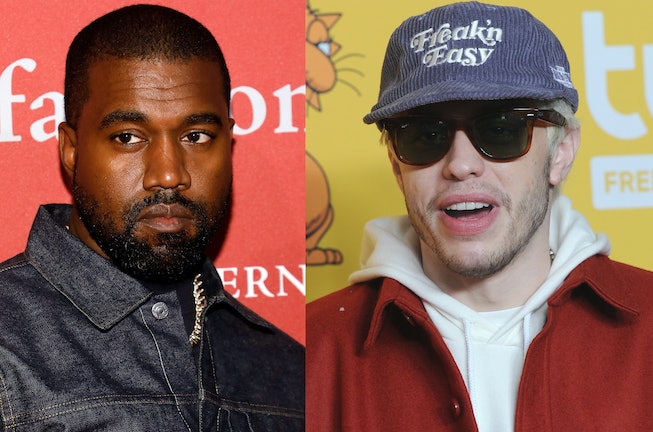 I’m not going to lie, I love drama. Specifically fights between people who I bear absolutely no relation to. Generally, I believe in minding my business. But, deep down, a good ol’ fashioned dispute will always grab my attention.

Good drama, however, comes with rules. It must be low-stakes, someone has to say something weird, and at some point, it has to end. Without those parameters a quick diss can erupt into complete chaos. Case in point — Kanye West and Pete Davidson’s far-too-public, never-ending feud.

It all started last year when Davidson met Kim Kardashian, West’s ex-wife, on SNL. A sneaky paparazzi photo of the two dining in Long Island sparked relationship rumors that just so happened to be true. But as their budding romance unfolded, West made it clear that he does not approve of the union, and things have quickly gotten ugly.

From nicknaming Davidson “Skete” to releasing a disturbing music video where he pretends to decapitate the comedian, and quite literally everything in between — the Donda rapper has left no petty stone unturned. In response, Davidson has mostly remained quiet in response, that is, until now.

Yesterday, West shared “a message” from Davidson on Instagram. The post has been deleted, but it contained screenshots of their tense text-messages, which were obtained by E! News.

“Yo it’s Skete,” Davidson reportedly wrote in the texts. “Can you please take a second to calm down. It’s 8am and it don’t gotta be like this. Kim is literally the best mother I’ve ever met. What she does for those kids is amazing and you are so f***ing lucky that she’s your kids mom. I’ve decided I’m not gonna let you treat us this way anymore, and I’m done being quiet. Grow the f**k up.”

“Oh you’re using profanity. Where are you right now?” West asked. Then Davidson responded, “in your wife’s bed.”

Their conversation spiraled from there. After Davidson sent a selfie of him (allegedly in bed with Kim), West said, “Happy to see you’re out of the hospital and rehab.” The comedian fired back, writing, “Same here. It’s wonders what those places do when you go get help. You should try it.” Then he offered to meet up with West in person, and wrote, “I’m in LA for the day if you wanna stop being a little internet b***h boy and talk.”

“You don’t scare me bro,” Davidson continued. “Your actions are so p***y and embarrassing.”

West declined the proposal and insisted that Davidson attend his Sunday Service instead. The comedian rejected the idea, and said, “This isn’t public, dude. I’m not here for pictures and press. Which is obviously all you care about.”

Their conversation seemed to end after Davidson said that he’s tried to help the rapper preserve his reputation behind the scenes. “You have no idea how nice I’ve been to you despite your actions towards me,” Davidson wrote. “I’ve stopped SNL from talking about or making fun of you, which they’ve wanted to do for months. I’ve stopped stand up comedians from doing bits about you ‘cause I don’t want the father of my girls' kids to look bad out there.”

“I have your back even though you treat me like s**t because I want everything to be smooth,” he concluded. “But if you continue to press me like you have for the past 6 months I’m going to stop being nice.”

Kardashian and West’s divorce has brought up conversations about abuse, co-parenting and how private tragedies can play out as public spectacles when celebrities are involved. Despite calls by some for privacy, aspects of the situation continue to play out on social media. Kardashian commented on West’s Instagram this morning in a post about their daughter North.