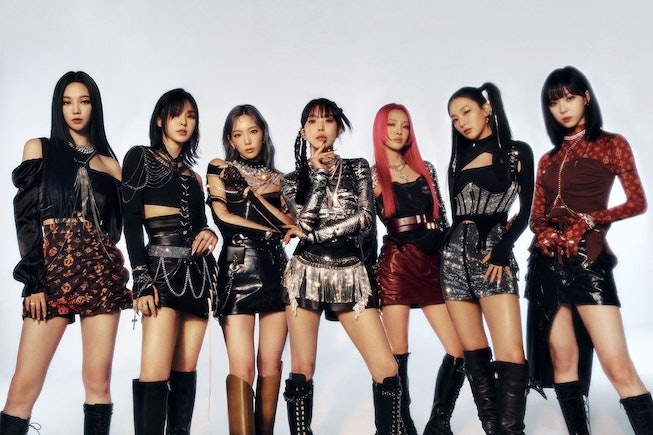 There’s a new supergroup on the rise. Girls On Top is the latest Korean pop-sensation, consisting of some of the genre’s top artists — meaning they’ve got literally everything working for them. From stellar vocals, catchy dances, clever lyrics, show stopping looks, and built in fanbases, the SM Entertainment-created group is poised to make a splash on the K-pop scene.

Keep reading for everything you need to know about K-Pop’s newest It Girls:

Girls On Top has seven members.

Girls On Top is composed of seven talented K-Pop stars. BoA, the eldest member, was a solo artist before joining the group and is known as the “queen of K-Pop.” Taeyeon and Hyoyeon used to be in the group Girls Generation, which stopped making music in 2017. Meanwhile Wendy and Seulgi were scouted from Red Velvet, while Winter and Karina were brought in from the group Aespa.

The group was created by SM Entertainment.

The members of Girls On Top are managed by SM Entertainment, which is the largest recording company in Korea. This year, SM decided to merge their top performers into one supergroup, and dominate the K-Pop universe. It seems their efforts have already paid off, as the girls first live-performance — during the SM variety show, SMTOWN LIVE — has racked up an astonishing 10 million views in just two days. Look no further to see their dynamic performance for yourself.

Following their debut, Girls On Top released behind the scenes footage of their rehearsal. Check it out below.

Girls On Top has already released their first song, “Step Back.”

Following their performance, the group released their first single, “Step Back.” It’s Girls On Top’s first and only single at the moment. The high-energy dance track gives each member a moment to shine, and combines pop lyrics and EDM beats with a flawless rap interlude. You can stream it on Spotify or Apple music.

Though the group just went public, they're already using social media to engage with fans. The girls joint Instagram account features behind the scenes footage and exclusive photoshoots of each member. They’ve also started a dance challenge for “Step Back,” and posted tutorial videos that fans can follow.