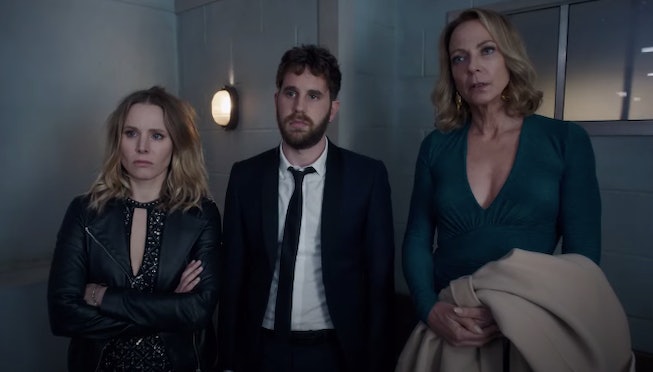 “Eloise is our half-sister, which means we can half-ass the relationship,” is certainly not the type of thing any bride-to-be would ever want to overhear her siblings saying about her upcoming wedding. But it certainly is the type of thing that is guaranteed to have audiences cracking up when new comedy The People We Hate at the Wedding premieres on Prime Video next month.

Directed by Set It Up’s Claire Scanlon and based on the 2016 Grant Ginder novel of the same name, The People We Hate at the Wedding stars The Good Place Golden Globe nominee Kristen Bell as Alice and Dear Evan Hansen Tony winner Ben Platt as Paul — two close-knit siblings who, as the above quote suggests, aren’t all too excited about attending their half-sisters rapidly approaching nuptials. Or, as a plot synopsis describes the new film, “Dysfunctional American siblings Alice and Paul, along with their ever-optimistic mom, are invited to the British wedding of their estranged half-sister Eloise as a chance for them to reconnect as — more or less — adults, and learn to love each other like they once did.”

Of course, this is a “hilarious raunchy comedy,” and thus, things expectedly don’t go according to plan once the squad arrives in London — something immediately gleaned from the official trailer, which opens on Alice, Paul, and their mom (I, Tonya Oscar winner Allison Janney) pacing around a jail cell. After informing the trio that Eloise, unfortunately, has not come to get them out, a police officer tells them that, instead, she left a letter. “Dear Mom, Alice, and Paul, all I’ve ever wanted was to feel like a part of this family,” it begins. “I thought maybe my wedding would be a chance to reconnect. I see now that, maybe, we were never really connected.”

From there, the trailer jumps back in time, tracking the siblings as they make fun of their posh sister (“My rich sister chose to stay in London and shove fish and chips up her butt,” Alice teases) and her equally posh wedding invitations; and later, as they wreak havoc in London, completely stressing out Eloise in the process. “From this moment forward, you will behave like a normal family who is here to happily celebrate a loved one’s wedding! Is that understood?” she screams at one point, as the whole family gets drenched in London’s classic downpour.

The entire film looks like a blast, something no doubt influenced by the dynamite cast. In addition to Bell, Platt, and Janney, The Rings of Power’s Cynthia Addai-Robinson stars as Eloise, while the rest of the cast is rounded out by Schitt’s Creek’s Dustin Milligan, Black Panther’s Isaach De Bankolé, 7 Days’ Karan Soni, Scandal’s Tony Goldwyn, The Lonely Island’s Jorma Taccone, Bridgerton’s Julian Ovenden, and House of the Dragon’s John Macmillan.

Check out the hilarious trailer below.

And don’t forget to make sure you’ve secured your invite to the Wedding of the Year when The People You Hate at the Wedding premieres on Prime Video on November 18.