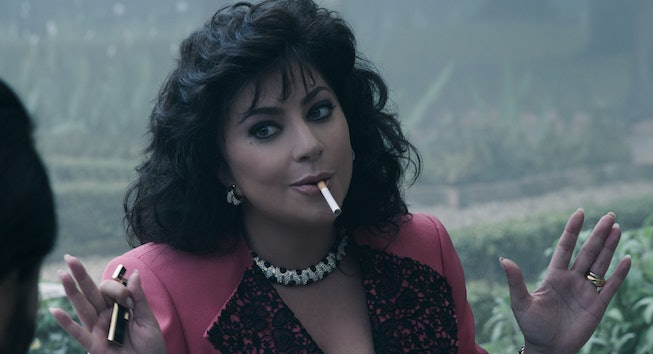 Ask anyone who hasn’t seen it what House of Gucci is about and they’ll probably answer with some approximation of: the organized murder hit on a Gucci heir, put in motion by his spurned wife. It’s an understandable plot point to base a film on, promising ample scandal and deceit without getting into specifics. But as it relates to the new Ridley Scott film, in theaters this Thanksgiving, it’s also slightly disingenuous. Though House of Gucci does give viewers the murder they were promised, the execution itself is hardly the film’s focus. In this two-and-a-half-hour epic, the murder isn’t even discussed until the final 20-minute stretch.

So it says a lot then that, despite largely ignoring its sensationalist hook for the majority of its runtime, House of Gucci manages to delight nonetheless. Like the clothes bearing its name, Gucci thrives on excess — and with director Scott making ample use of his massive $75-million budget, Gucci turns out to be an unmistakably fun ride. It’s a riotous good time filled with capital-A acting, enviously covetable fashion, a rollicking soundtrack of 70s and 80s pop hits, and one incredibly hot sex scene between central stars Lady Gaga and Adam Driver.

None of this, however, makes House of Gucci a particularly good movie. The line between “tasteful” and “enjoyable” has always been razor-thin, and if there were ever an excuse to make a clear delineation between what makes a film quality as opposed to merely entertaining, Gucci provides it. Bogged down by a strangely-paced screenplay, the film too often feels disjointed while its affinity for overindulgence squanders any potential it had to qualify as legitimate prestige.

Luckily, in its place stands a proud work of textbook camp.

Of course, camp comes accidentally. Watching certain sections of this film, one is reminded of the movie Scott thought he was making: an estimable, if still provocative, look at the Italian fashion dynasty under the reign of several different Gucci men. It’s hard to imagine the director purposely creating a movie this comically unhinged. And yet, that ends up being its strongest selling point.

For this, Scott owes a lot to Gaga, whose scene-stealing Patrizia Reggiani easily comes off as Gucci’s most deeply-felt and nuanced character. The artist born Stefani Germanotta has never made any qualms about her musical theater roots, but in no past project have those roots been quite this visible. Unlike in A Star Is Born, where the pop-star first revealed her Oscar-worthy acting prowess in a performance that was deliberately stripped-down, House of Gucci asks that she dial everything up. At any given moment, Gaga is playing to the very back row, exaggerating every word, every movement, every microscopic facial expression. Even her accent — while not necessarily “accurate,” certainly can’t be called anything less than committed.

There's no denying that the actress also gets the most to do in this film; she can be coquettish and coy, as Patrizia is during the courting stage with Maurizio. But she can just as soon be coldly calculating and conniving, particularly once she’s gained entrance into the Gucci fold and gotten a taste of high society. Gaga is a master at giving voice to interior emotions; when she hunches over from the passenger seat to surprise her husband with a little roadhead, one knows her excitement isn’t purely physical; she’s also love-drunk on the promise of real power. If House of Gucci does anything successfully, it’s solidifying Lady Gaga’s status as a leading lady worth her top billing.

It’s Gaga’s sometimes-bonkers-but-always-compelling character choices — a bone-chilling death-stare here; an ominously threatening teacup-stir there — that elevate her performance to the level of high-camp. But even her performance feels small next to Jared Leto, playing Paolo, the disappointment of the Gucci family. Bathed in prosthetics, Leto is barely recognizable, and the actor uses this transformation to turn in what is possibly his biggest performance in a career chock-full of them. In any scenario, Paolo would stand out as the film’s clear comic relief, but the twisted brilliance of Leto’s take on the tragic figure is just how pitiable he makes this balding “triumph of mediocrity.” Paolo is stubborn and childish, a bumbling idiot and a spoiled brat whose sense of entitlement is only slightly larger than his delusions of grandeur. But by emphasizing his character’s ineptness, Leto incidentally turns Paolo into a quasi-sympathetic figure. His persistence in trying to impress his relatives, only to enrage them instead, brings to mind many similar failsons throughout history. Leto’s Paolo is a Saturday Night Live take on Succession’s Kendall Roy, albeit one that feels decidedly in-on-the-joke.

The rest of Gucci’s performances help to balance things out. As Maurizio, the aforementioned heir who meets his untimely demise by the end of the film, Adam Driver continues to exhibit real movie star charm and charisma in a comparatively straitlaced performance. It’s an admirable choice in a movie this over-the-top, but one that makes sense for his meek lawyer character — and one that makes his heel-turn in the film’s back-half all that more perceptible. Driver is matched in energy by Jeremy Irons, playing Maurizio’s strict business-minded father, Rodolfo, whose character beats (disapproving of Maurizio and Patrizia’s marriage on clearly classist terms; succumbing to old age and dying) pretty much necessitate a more measured approach.

But Gucci is begging to just unleash. It’s no surprise that the film’s more serious moments are also its weakest. Gucci shines brightest when embracing its innate ludicrousness. Viewers want to see Lady Gaga seductively sipping a Tanqueray martini while batting her eyelashes at a bar. We want to see an opera singer refuse to stop singing, even as federal agents struggle to usher her off the stage. We want to see Al Pacino, as Rodolfo’s septuagenarian brother, embracing the slapstick of his delightfully quarrelsome relationship with Paolo, his son. And we definitely want to see Paolo retaliating against his dismissive uncle by urinating on a colorful silk Gucci scarf. What we could stand to skip? Business meetings about sales projections.

There’s a war at the heart of House of Gucci between what the film is and what it clearly wants to be. This sense of unevenness is most palpable in the second half — when Patrizia and Maurizio break up, Gucci descends into melodrama, forcing Gaga to abandon her resolute fierceness in favor of broken humiliation. Not coincidentally, this is also when the film begins to lose steam.

The central murder helps to restore some of that lost momentum, but even Maurizio’s death comes and goes with surprisingly little fanfare. In reality, it’s the return of the fierce Patrizia that helps pick Gucci up out of its temporary slump, which begs the question why Scott ever thought the film could survive without her. Gucci may be about the Guccis, but without Patrizia’s interference, their lives would be notably lacking in the scandalous intrigue that make stories worth telling. At its best, House of Gucci is an often captivating story about one woman’s desire to instill her own cutthroat ruthlessness into the soul of her husband, only to have that same ruthlessness eventually used against her. As her marriage to Maurizio sours, it’s Patrizia whose fury, whose rage, whose hurt we feel most viscerally, and by the time she reaches her breaking point, it’s her bullets — or the ones she paid for, at least — that are left ringing in our ears.