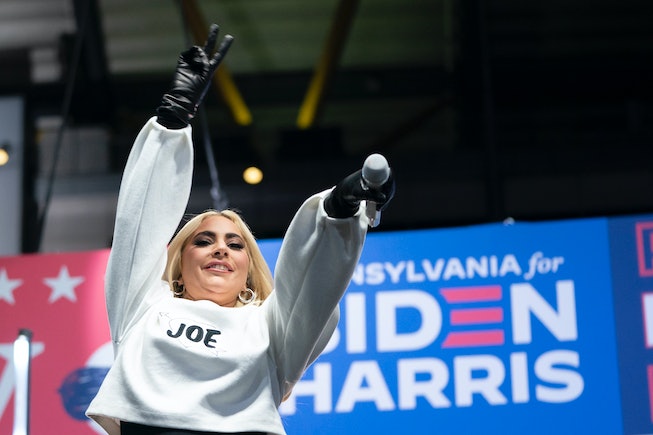 Details of inaguration day 2021 are slowly but surely trickling in and one Stefani Joanne Angelina Germanotta will officially be in attendance.

Yes, pop titan and Chromatica resident Lady Gaga will sing the national anthem as the Biden-Harris administration gets sworn into office on January 20. No one should be even marginally surprised, considering how Gaga devoted the majority of autumn of 2020 to campaigning on Biden's behalf and encouraging her fans to register to vote.

Her support — particularly in key swing states like Pennsylvania — drew the ire of the Trump campaign. Tim Murtaugh, Trump’s director of communications, called Gaga an "anti-fracking" activist, which is actually a good thing, but alas...

Joining Gaga at the inaguration will be Jennifer Lopez, Demi Lovato, and Justin Timberlake; it's a big hint that Hollywood's superstars are back in good terms with the White House after cerimoniously breaking ties during the Trump administration.

Tony Allen, CEO of the inaugural committee, said in a statement: "We are thrilled to announce an inspired group of dynamic participants for the 59th Inaugural Ceremonies. They represent one clear picture of the grand diversity of our great nation and will help honour and celebrate the time-honoured traditions of the presidential inauguration."

For a preview of what's to come, here's Gaga singing the "Star Spangled Banner" at Super Bowl 50 in 2016: