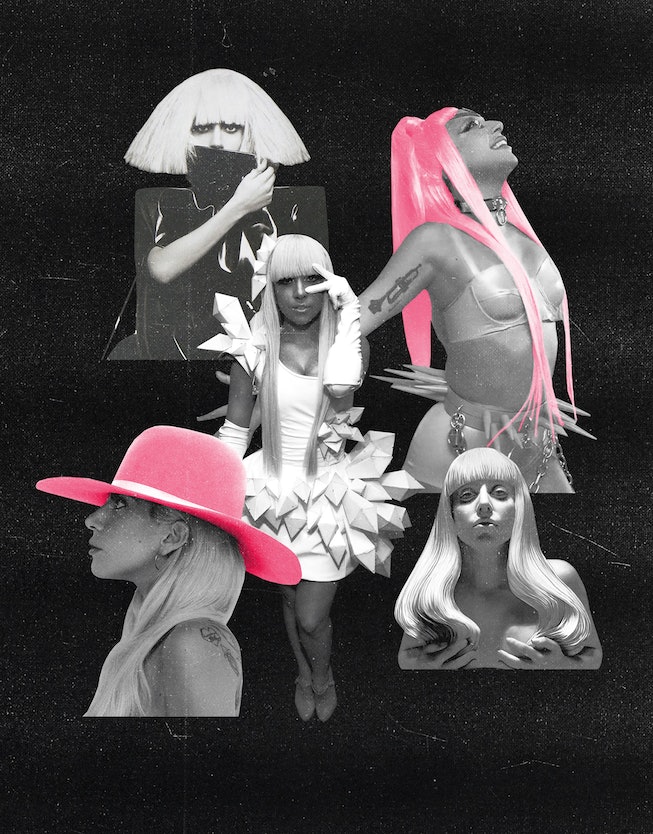 In order to be a permanent fixture in the pop culture lexicon, an artist has to understand reinvention. It’s part of the pop star’s hero journey, and no one does it better than Lady Gaga. Since arriving on the scene back in 2008 with earworm hooks, powerful vocals, and an electrifying presence, the artist formerly known as Stefani Joanne Angelina Germanotta has routinely morphed into different, fully-formed versions of herself with each of her five past album cycles, from the futuristic-tech era of The Fame to the giddy ingenue of A Star Is Born.

After a four year break and multiple reinventions, Gaga is now on the precipice of her sixth studio album and dance reckoning, Chromatica, and its cyber fembot universe. Ahead of its release, NYLON journeyed back to the very beginning of Gaga, to relive the style evolution of once-in-a-lifetime pop visionary.

The Artist Is Present

With her debut album, Gaga immediately let the world know she wasn’t like the other pop stars — she was an artist. Her music videos were avant-garde spectacles, the likes of which pop music hadn’t seen for years. Her most popular track from this era, “Bad Romance” found her decked out in the Alexander McQueen “Plato's Atlantis” Spring/Summer 2010 collection amid a sterile, futuristic tech dystopia and made anyone who questioned her status as a pop savant look like a fool.

Her experimentalism even extended to her red carpet appearances and performances where she mesmerized audiences literally every chance she got. There was no avenue of shock value left unexplored. Gaga historians will remember her bleeding from a spontaneous chest wound at the 2009 VMAs, showing up in a dress constructed from bloody cuts of flank steak, strutting down the red carpet in intergalactic centrifugal circles, or masked in red lace. Every public appearance was theatrical as hell, blurring the boundary between performance and real life, and always in a way that showed how in control Gaga was of her vision. She was decidedly not a pop star in distress.

The Pride of Pride

Gaga’s sophomore album Born This Way immediately picked up on the momentum of The Fame Monster. It was hard, fast, and more glamorous than ever. This era found Gaga pushing her storytelling boundaries through more extreme and complete universe-building — as she states in her "Marry The Night" video, "It's not that I've been dishonest, it's just that I loathe reality." Her video for “Judas” is ornate biblical mayhem that still feels fresh almost ten years later. Gaga was a gay icon from the get-go, but the Born This Way era saw her pushing LGBTQ+ advocacy even more fervently. Let’s be real — the album’s titular anthemic track pretty much ensured that it would get airtime at every Pride event in perpetuity.

Gaga continued to play her hand at “gimmicky” moments. She arrived encased in a giant egg (yes, an egg) at the 2011 Grammy’s, only to hatch during her performance. Born This Way clarified her political voice, while also allowing her more leeway to cheekily dip her toes into more taboo acts, like performing in a latex nun habit. Blasphemy? No — by this point, we viewers knew better. She was simply living art, haters be damned.

Gaga’s taste for sickening opulence reached new heights with ARTPOP. Five years into her career, she straight up had her own mythology, and was a goddess figure as far as pop music and her Little Monsters were concerned. Gaga’s natural progression in the avant-garde brought her to new levels of gaudy decadence.

ARTPOP was highbrow-lowbrow — the clash of fine art and pop culture, intelligence with a knowing wink. She performed as a twisted version of Bottecelli’s The Birth of Venus at the 2013 VMAs, and she strode through the 2013 American Music Award red carpet on a white horse in a lavender Versace gown and a flowing blonde wig like a modern-day Lady Godiva. She also recruited the pinnacle of the guilty pleasure industrial complex — The Real Housewives of Beverly Hills and their fearless leader Andy Cohen — for her “G.U.Y.” music video, proving that there are no limits when you’re the one making the rules.

One could say Joanne was a hard left for Gaga. First of all, it was her “country” album. But it also presented a new Gaga, one that was more vulnerable stripped away from her pop wheelhouse. Being Lady Gaga, it was never going to be a functional, drab branch of yee-haw culture. Sleek pantsuits and Americana rocker chic became part of her style rolodex, as if to say, “I’m a chameleon, so what?”

In the music video for “John Wayne,” Gaga shifts gears into a new type of allure: the rowdy and sensual bad girl who lives for her man, beers, and getting into trouble. And in true Gaga fashion, her sky-high stiletto platform boots double as machine guns.

Lest we forget that Gaga at her core is a theatre kid with a budget, she arrived with her most meta era: A Star Is Born. Though it wasn't technically a "Lady Gaga" project, she took her role of the young ingenue to heart, allowing it to bleed into her press interviews. She floated through talk shows and red carpets with a sense of true giddiness and disbelief. She clung to her co-star, Bradley Cooper, thankful to have him as a shield and confidant. It was as if Gaga was constructing a new timeline where she wasn’t Stefani, but a truly pretty young thing plucked out of the ether and dropped in the limelight.

She was the dazzled actress in dreamy, flowing gowns fit for a princess, the hungover It Girl with overgrown roots in Celine at the 2019 Grammy’s, and hot pink Matryoshka doll of Brandon Maxwell-clad Hollywood personas. It turned out, there can be 100 people in the room, and 99 of them are probably Gaga in disguise.

In The Future Is The Past

Now, five albums in and four years since her last solo record, Lady Gaga is ready to move forward. In order to do so, Gaga needed to return to her roots: distilled, fearless dance pop. As she told Beats 1's Zane Lowe, "I hope that [people] listen to this record, and go on not only my personal journey with me, and dance through all the pain, but also go through their own journey, and dance through all their pain."

Chromatica is Gaga sticking to what she knows best: delivering no-strings-attached fun while establishing a new universe — even if it is close cousins with Grimes’ “Genesis” futurism from 2013. It's not "dystopian, and it's not utopian," she says, it's just how Gaga sees the world: colorful, and still abundant with joy.

Gaga is already clearly having a blast playing her latest character: a bubblegum pink cyberpunk with her third eye wide open, donned in holographic space wear, who disregards the laws of space and time with a flip of her CGI locks. It’s kitschy, over-the-top, and totally exhilarating. Naturally, her Little Monsters are more than down for the ride.