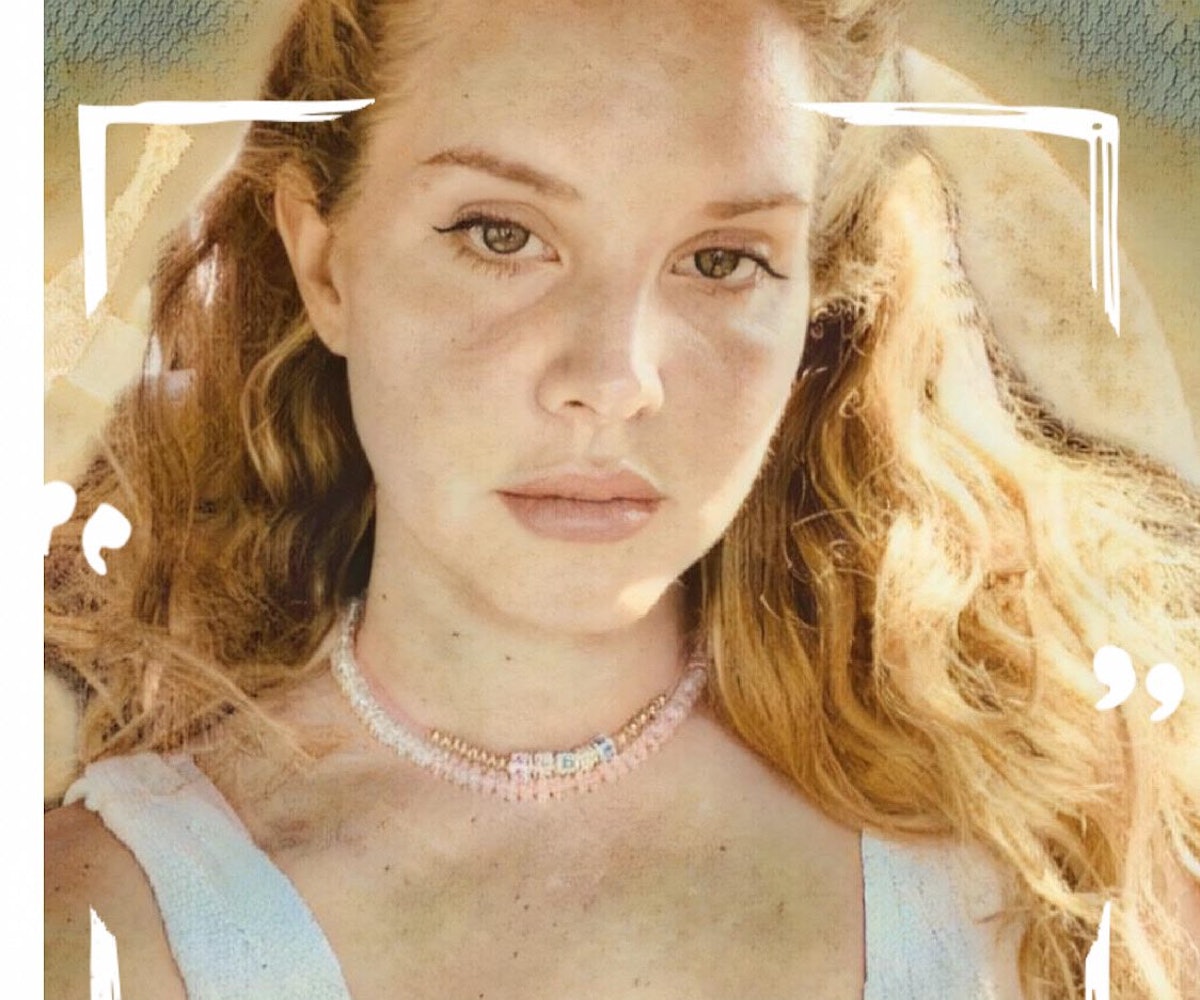 As promised, Lana Del Rey’s next studio album, her second this year, Blue Banisters is on its way. In an unexpected surprise to her fans, the star released three new songs from the forthcoming project on Thursday: the title track “Blue Banisters,” “Text Book,” and the Mike Dean-produced “Wildflower Wildfire.” They offer our first taste of the forthcoming record, expected out on Independence Day, which finds the 35-year-old songwriter diving into her psyche, one that feels wiser and delves deeper into her core identity than ever before.

Based off their sound and lyrics, the three songs follow in the same vein of hushed interiority that colored her last record Chemtrails Over the Country Club. Like “White Dress” — which found Del Rey reminiscing about her days cutting her teeth in Orlando before Born To Die fame — these songs fill in more of the blanks surrounding her early, pre-celebrity existence.

On “Wildflower Wildfire,” a stripped-down piano ballad that sounds like Del Rey performing it alone in a jazz club somewhere, she describes herself as a “wildfire” and “running on stardust,” citing a troubled-sounding childhood as explanation.

“Here’s the deal, cause I know you wanna talk about it/ Here’s the deal, you save those gaps to fill in so here/ Here's the deal, my father never stepped in when his wife would rage at me/ So I ended up awkward but sweet/ Later than hospitals and still on my feet/ Comfortably numb but with lithium came poetry,” she sings on the second verse.

It’s an obvious direct reference to her mother, Patricia Grant, whom Del Rey has rarely mentioned throughout her career, though now it makes sense why, if they have a strained relationship; her mentions of “comfortably numb” and “lithium” may reference the infamous Pink Floyd song and Nirvana track, bands that she’s cited as inspirations to her music in the past.

On “Text Book” she continues to reflect on how her childhood relationship with her parents shaped her current love life, opening the moody track right off the bat with her potent daddy issues: “I guess you could call it text book/ I was looking for the father I wanted back/ And I thought I found it in Brentwood/ It seemed only appropriate you'd easily have my back.”

It’s likely she’s noticing the connections between her father and her current fiancé, guitarist Clayton Johnson, as she sings later on in the song: “Other men I met felt right, would smile at you and stick a knife in your back/ Finally, I met you so I'm not wonderin' why.”

When Del Rey announced Blue Banisters back in March — titled Rock Candy Sweet at the time — she also stated that the album would “continue to challenge” criticisms she’s received from the media that her career was built on cultural appropriation and glamorizing abuse. She appears to follow through on that promise on these songs, especially on “Text Book,” where she not so subtly includes a Black Lives Matter drop: “Maybe just the way we're different could set me free/ And there we were, screamin' ‘Black Lives Matter’ in a crowd/ By the Old Man River, and I saw you saw who I am.”

Yet, Del Rey is able to signal her growth in perspective regarding feminism more elegantly on “Blue Banisters,” a crescendoing, towering ballad about a man who once promised that he’d be around to keep her banisters painted blue — a very Notebook-esque vision of masculinity and romance. But by the end of the song, after he’s left a “hole in her heart” and is nothing more than a man that appears in her visions, Del Rey marvels that at least she has the women in her life to keep her going: “Now when weather turns to May/ All my sisters come to paint/ My banisters green/ My blue banisters grey,” she sings. It’s proof that even while seven albums deep into her career and with a public adamant they already know her, there’s still more of Del Rey left to uncover.