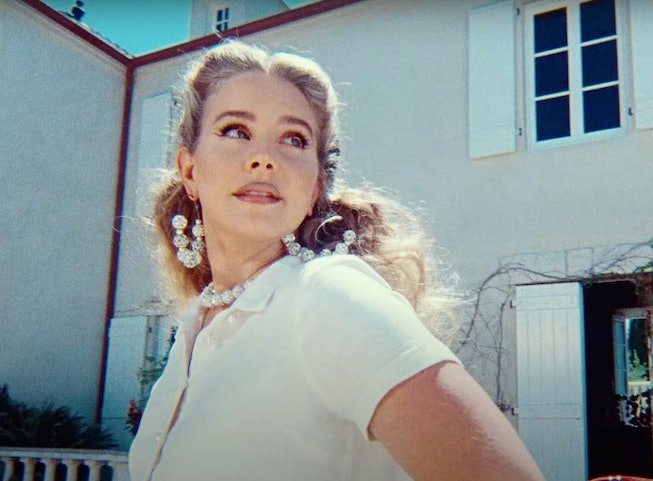 If there was any doubt left, let it be known that Lana Del Rey has fully committed to the bit. “I’m not gonna change, I’ll stay the same,” she resolves midway through her seventh studio album, Chemtrails Over The Country Club. This summer will mark ten years since she first graced our ears with “Video Games.” In that video, a feat that lives on in endlessly rotating Tumblr gifs, Del Rey — who had until that point been known as Lizzy Grant — stitched webcam footage of herself with Super 8 stock reels of mid-century splendor: Hollywood boulevard, girls in pretty dresses, and cars with their tops down. She asserted herself as not only a product of American iconography, but a part of it.

She revisited those collaging instincts late last year in the video for the first Chemtrails single, “Let Me Love You Like a Woman.” Lana is still singing into her camera, although she’s visibly not as preoccupied with the glamour of the shot. And rather than relying on stock clips, she’s the one who’s accumulated an archive of her own. Shuffling through iPhone footage of varying dimensions, she’s singing on stage with Joan Baez, hanging with Sean Ono Lennon, or riding a golf cart with girlfriends to shoot photos with Neil Krug. It’s like watching her manifest exactly the kind of cinematic universe she’d intended to from the get-go, the culmination of years of having stuck to her guns.

Her ever-persistent gall has rarely not been met with skepticism, but back in 2019, it all paid off with Norman Fucking Rockwell!, the record that critically anointed Del Rey as the great American songwriter she’s always been. On the final leg of the Norman tour before the onset of COVID-19, she sang its Californian rhapsodies to middle America. “The best thing I ever did was tour the Midwest,” she told Interview Magazine. “The one way I would describe the Midwest, Oklahoma in particular, is that it’s not cooked or oversaturated, and there’s still space to catch that white lightning.”

That unique and mystical spatial awareness informs all 11 songs on Chemtrails. They’re some of her most elemental to date, cut down to their barest form. Rarely do they veer from a gentle, hypnotic lull. You wouldn’t necessarily need Del Rey to mention Arkansas (sung as “our Kansas”) to envision the track “Tulsa Jesus Freak” echoing down the prairie, but why would she hold that back? If the sonic terrain hasn’t varied dramatically across her catalog, the landmarks have always shifted; the vantage points from which she’s watched the mutation of the American dream. This time it’s less about posting up at the Chateau Marmont or the edge of the Hollywood sign and more about getting high in a parking lot in the middle of nowhere, a communion no less spiritual.

As late capitalism continues to drive American pop cultural output further east and west, it makes sense that Del Rey would plumb the middle of the country for the answers to her questions, a place less consumed by aesthetic trappings and moral absolutism. What she finds feels liberating. On any other album, the wide-eyed mosey of mid-album ballad “Not All Who Wander Are Lost” might have read like a Pinterest cliche. Here, it feels sincere, like a guiding principle in the limitless expanse of the heartland. It’s one of the many instances on the album where Del Rey’s inherent need for independence is at odds with her desire for belonging: to say she’s wild at heart is one thing; to actually be it is another.

Instead, community and feeling a part of something greater than herself leads to one of the more poignant moments on the album on reflective opener “White Dress,” one of her sharpest tracks to date. On it, she loosely details humid days in Orlando, the excitement and hunger that led up to her mainstream breakthrough. “I only mention it cause it was such a scene, and I felt seen,” she exhales, all but straining her voice to reach heights that were once easily attainable, the crackling rip of her vape heard in the background.

Del Rey turns to the women in her life as her village on the album’s backend of songs that taper off into the night. Zella Day and Weyes Blood join for a cover of Joni Mitchell’s “For Free,” and she recruits singer-songwriter Nikki Lane for the fleeting country sting of “Breaking Up Slowly.” Lana’s music is often lazily deferred to as “sad,” but there’s a surprising amount of hope to be found in Chemtrails, especially in the friendships she’s established. “Court almost burned down my home, but God it feels good not to be alone,” she sings on “Dance Till We Die.” When the sky falls down, at least she’s still got her girls.

If there’s a main source of gloom in her music, it’s in our misinterpreting, a fear of hers that haunted the album’s long rollout. She says she plans to address critiques that she “built her career on cultural appropriation and glamorizing domestic abuse” on her next album Rock Candy Sweet, tentatively scheduled for June 2021. But she shouldn’t have to over-explain when she already has a song like “Yosemite.” It’s the only Chemtrails song she didn’t make with Jack Antonoff, having initially recorded it with Rick Nowels for her fourth album Lust For Life, and it feels especially relevant. Singing out from the canyon and into the starry sky, she sounds so certain of her intentions that nobody in the world could persuade her otherwise: “We did it for fun, we did it for free. I did it for you, you did it for me. We did it for the right reasons.” Who are we to question her?