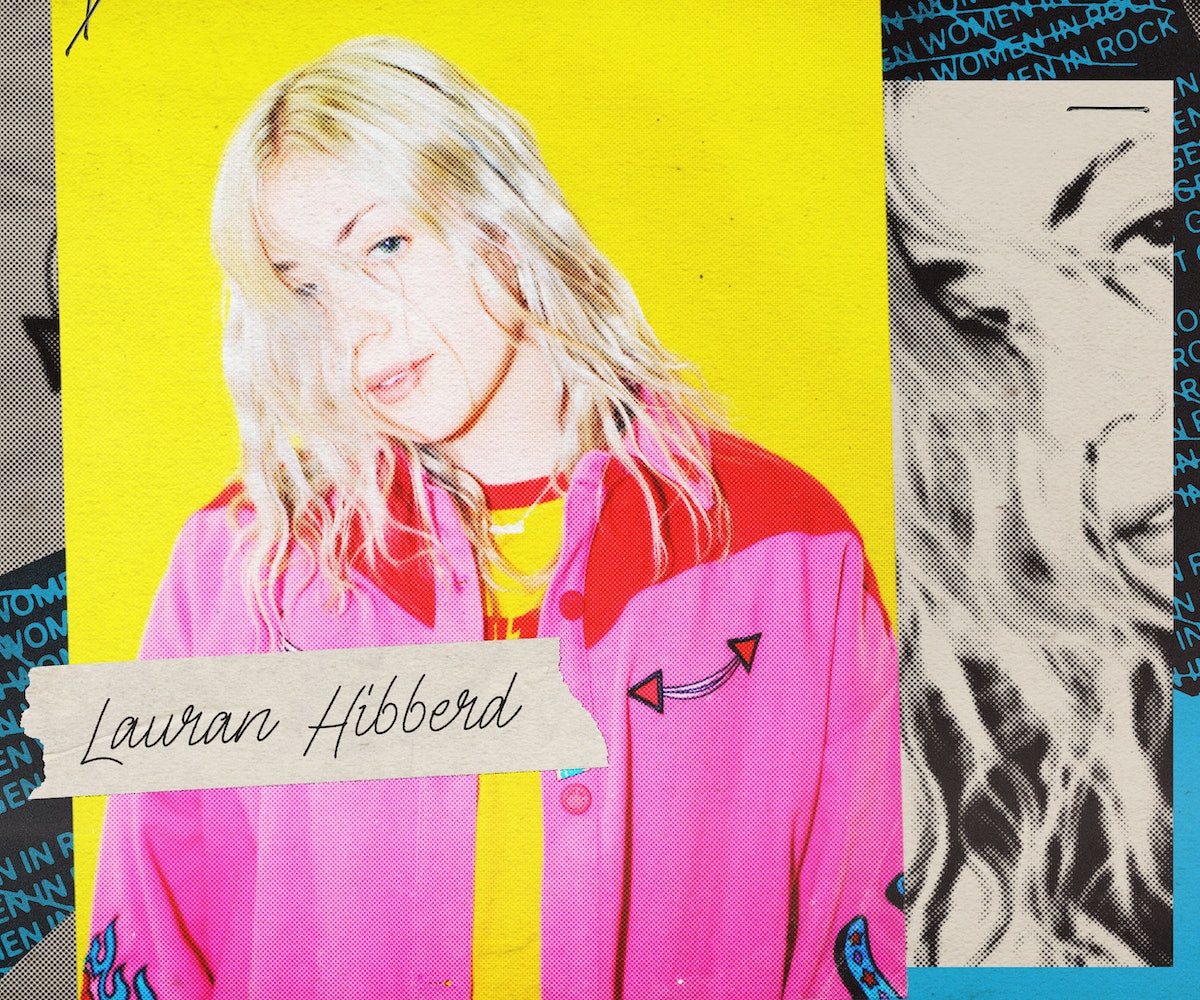 England’s Isle of Wight is not exactly known for its musical exports, but Lauran Hibberd is working to change that. After early forays into “really depressing” folk music, her perspective changed when she was introduced to the music of Weezer by a producer. She’s since earned acclaim for wry garage rock tunes that have a DIY feel but still pack huge pop hooks.

A clever, confessional lyricist in the vein of Alex Lahey and Courtney Barnett, Hibberd has a penchant for finding meaning and humor in unlikely places. On “How Am I Still Alive?” a personal passion for Michael Cera becomes a lens to examine youthful ennui, while mindless TV binging and dubious gossip frame the angst of growing up – and apart – on “Shark Week.”

“Normally, something will just fall out of my mouth when I’m playing around with chords or whatever,” she says with a laugh. “That’s what I tend to lead with, whatever stupid part that people would normally rewrite, I keep.”

Working with producer Suzy Shinn (Panic! at the Disco, Fall Out Boy, Weezer), Hibberd is putting the finishing touches on her Goober EP, as well as the debut album she says has been three years in the making.

Here, Hibberd shares her thoughts on the “slacker pop” label frequently applied to her music, the importance of a cheeky song title, as well as the perks and drawbacks of hailing from a small, tight-knit English isle.

You started playing guitar as a teenager and began songwriting not long after that. How long did it take you to hit on the way that you’re making music now? Was there a big aha moment or was it more gradual?

I definitely did have that lightbulb moment. When I first started learning guitar and playing songs I was basically a folk artist. I used to sit in my room and write really depressing songs on my acoustic guitar, which was super fun. I was just gigging locally, and what happened is I met a producer who lives on the Isle of Wight, actually, who used to be in this really cool rock band, they toured with The Who. He was like, “You should listen to Weezer.” And I was like, “Who’s Weezer?” [laughs] I had the record in my car and it got stuck because I have a really old, stupid car, so all I listened to for about three years was The Blue Album, which I’m happy with. I loved the lyrics and thought the guitar sounded great. And then instantly I was like, “What if we changed my songs up?” I went in with folk songs and we turned them into these really funny, almost garage band-style.I was loving Weezer, wearing Weezer t-shirts, when everyone sort of stopped doing that. I was like, “This is the best band in the world!” Really late to the party, but it’s all good.

The genre label “slacker pop” has been applied to your music in a lot of coverage. What do you think of that term?

I’d never really heard it before when it first got stamped on a press release or whatever. But then everyone started to say it and then people started to ask me, “What does that mean?” And I was like, “Oh yeah, what does it mean?” I came up with this thing in my head where I think it’s basically like pop music for people who are afraid to say they like Ariana Grande.

And that’s effectively all I’ve ever done. I didn’t have a really cool up-bringing, musically. My mom didn’t love The Beatles. I just grew up listening to whatever was on the radio, so I had a super pop upbringing. That’s all I really knew until I was maybe like 16, and then I was thrown into all the music of the band world and I was like, “Woah. Mind blown!” I think that’s always in me and I love nothing more than a good chorus. I just think I like to disguise that a little bit into something else to make it feel cooler. To me, anyways.

Does the idea of a big, impactful debut album appeal to you? Is there a reason you’ve been waiting to put that out?

I’m recording my debut album in November this year. I’ve been working with producer Suzy Shinn, who actually has done all the latest Weezer records. I’m super excited, but it has felt like a long time coming for me. I’ve sort of been doing this since I was 16 and I’m 23 now. Everybody has been like, “Just wait. One more EP, two more singles.” It’s been building up to this moment, but I’ve wanted to do an album for probably three years. It would definitely not have been this album if [the pandemic] hadn’t happened, so I’m glad I waited, but I’m so ready to do it now. I definitely am over singles and EPs. I want to be an album artist, for sure.

From a lyric writing standpoint, is there a typical way a Lauran Hibberd song comes together?

Normally, something will just fall out of my mouth when I’m playing around with chords or whatever. Something will come out that is so stupid, because I haven’t thought about it. That’s what I tend to lead with; whatever stupid part that people would normally rewrite, I keep.

I love song titles and I’m forever writing stuff on my notes in my phone like, “That would be a great song title.” Sometimes that triggers stuff. I’m like, “What would I want someone to say on the radio when they’re introducing a track of mine?” I want people to say weird stuff on the radio, basically. If I can get Annie Mac to say “Old Nudes,” that’d be fun.

Take a recent song like “How Am I Still Alive?” I know there’s the Michael Cera angle of it all, but it’s also about the general malaise and difficulty of existing. With a song like that, do you recall what the initial idea was that got the ball rolling?

I remember being like, “I want to do a song called ‘Michael,’ obviously about Michael Cera.” I watched Scott Pilgrim vs. the World the night before, which I’ve seen 100 times, but it just rekindled a childhood spark in me. When I started writing the pre-chorus, which is the fast talky bit, I imagined in what world I would ever meet Michael Cera and how that would come about. And then I left it for a while and I was like, “That’s not gonna be anything.”

I started what I thought was gonna be a new track, which is the whole first verse about being super bored and uninspired and unmotivated. I managed to merge the two and it made sense. Lyrically, the whole song is about being afraid to go outside. What if you meet the guy of your dreams and he sucks? Literally why am I breathing? I was questioning my whole entire existence and I spilled it out in some weird word vomit.

If you had to pinpoint one or two tracks of yours as a good starting point for a new listener, which would you choose?

I would send them to “Hoochie” from my first EP and also “Boy Bye,” which I released late last year. If someone was like, “What do you do?” I think that’s the easiest way to explain.

Have you spent some of this time planning how you want the live shows to be and what you want to make them special?

Definitely. I feel like everything has kind of stepped up, writing-wise, producer-wise. Everything feels like it’s in a really good place, and now I feel that [the live show] has to be the same. I’m evaluating how that’s also going to make that same jump and I’m really excited. I’ve bought some very cool stage props, so watch out.

Has spending a lot of the last year sidelined been challenging for you as a new artist?

I’ve definitely been through some emotions with the whole pandemic. Some days I’m like, “Oh my god, I’ve missed it. This is gone.” And then the next day, I’m like, “Oh wait, everyone is in the same boat. Might as well write another 100 songs and see what happens.”

Who are some other young artists people should be paying attention to?

In the U.K., especially from the Isle of Wight, my best friend who I grew up with is in a band called Coach Party. They’re absolutely smashing it right now. Super indie, super rock, and great. There’s a girl called Baby Queen. During lockdown, it’s the only act that I’ve seen [really take off]. I’m like, “Look at that!” That was a really crazy internet-born thing and it’s really cool to see.

Are there certain benchmarks you really want to reach in this early stage of your career?

Is there anything else about yourself you would want people to know?

Being from the Isle of Wight, which is a really small island off the south coast of England, is basically the worst place you could be born if you want to be a musician. It’s been quite difficult for me to even get off of the Isle of Wight and I think that’s always a good thing to mention. I basically started with a broken ankle, being from where I’m from.

My mum and dad love it, and they joke, but I’m literally famous on the street where we live. People can’t believe that someone who was brought up opposite them played Glastonbury. Being in the local paper and that kind of thing is really sweet. It gives you a different experience than if I was born in London. I think it’s shaped the way I write songs and the way I am, as well. On stage, I’m really open. I talk about everything. I think that’s just the way I’ve been brought up; everyone knows their neighbors and their neighbors’ cats and everything. There’s this sense of openness that I have, and when we go to London and everybody is sterner, I think it might be refreshing for this girl to be talking about her irritable bowel syndrome on stage. [laughs]