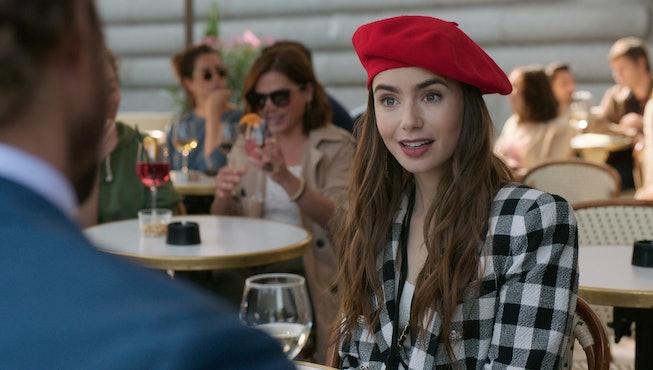 Girls living, laughing, and loving in the "big city" are one backbone of great television. Sex and the City is the obvious and foremost example of the genre, and its creator, Darren Star, is attempting to spin some new magic with the forthcoming Netflix series Emily In Paris.

The new show stars Lily Collins as the eponymous Emily, an ambitious midwestern marketing girl trying to make it work in the city of lights. "Oh my god," she says in awe as she opens her windows to breathtaking views of Paris. "I feel like Nicole Kidman in Moulin Rouge," Minus the whole succumbing to a raging case of tuberculosis, of course!

Emily doesn't speak French and her colleagues take the route of the stereotypical Parisian iciness, which is what we in the entertainment biz call "stakes." Since it is first and foremost a Star production, Collins zips in and out of meetings, cafés, and bistros in a montage of cute, frothy outfits and elegant gowns that guarantee that at the very least, Emily In Paris will deliver on the sartorial eye candy front. Another Star trademark? Lot of classically handsome men vying for Emily's heart, duh.

Emily In Paris lands on October 2.