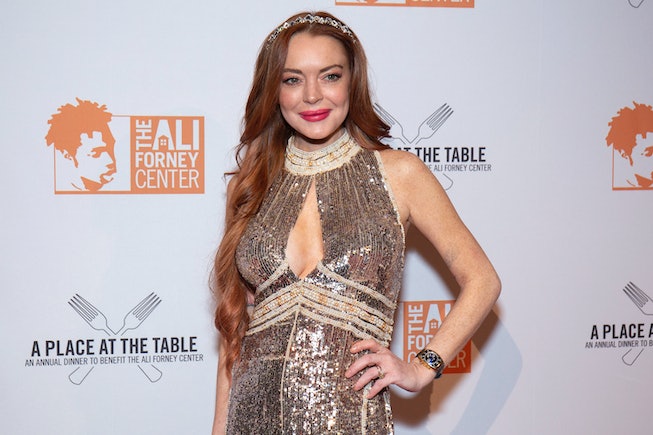 Lindsay Lohan is making a comeback. The recently engaged actress just expanded her deal with Netflix, securing the lead in two Netflix originals. According to Deadline, the deal comes after her successful attachment to the upcoming holiday film, Falling for Christmas, which was her first acting gig in years.

Lohan took a long hiatus from performing after a tumultuous period in the limelight. She first rose to fame in 1998 after starring in The Parent Trap. Then, in the years that followed, Lohan became a household name for her roles in Mean Girls, Confessions of a Teenage Drama Queen, Herbie Fully Loaded, and Freaky Friday. Unfortunately, her career was paralleled by a rocky-relationship with the media which ultimately led the actress to move to Mykonos, Greece, in search of a quieter lifestyle.

While living there, Lohan purchased beachfront properties and produced an MTV reality show called Lindsay Lohan’s Beach Club. The show ran for one season in 2019, airing from January 8th to March 25th.

It’s been nearly a decade since her last appearance in a major production, and fans are more than ready to see Lohan return to acting. Netflix’s Director of Independent Film, Christina Rogers, is excited as well. The executive recently gushed about getting to work on more projects with the actress. “We’re so happy with our collaboration with Lindsay to date and we’re thrilled to continue our partnership with her,” she said. “We look forward to bringing more of her films to our members around the world.”

The two Netflix Originals that Lohan will star in seem to be in early development. Neither have a released title or premiere date, but we won’t have to wait too long to see the actress back on our screens. Her upcoming movie, Falling For Christmas, premieres later this year — right in time for the holidays.

Per the logline the flick stars Lohan as a newly engaged, and spoiled, hotel heiress who gets amnesia following a skiing accident. With nowhere to go, she finds herself in the care of a handsome lodge owner and his rambunctious daughter a few days before Christmas.