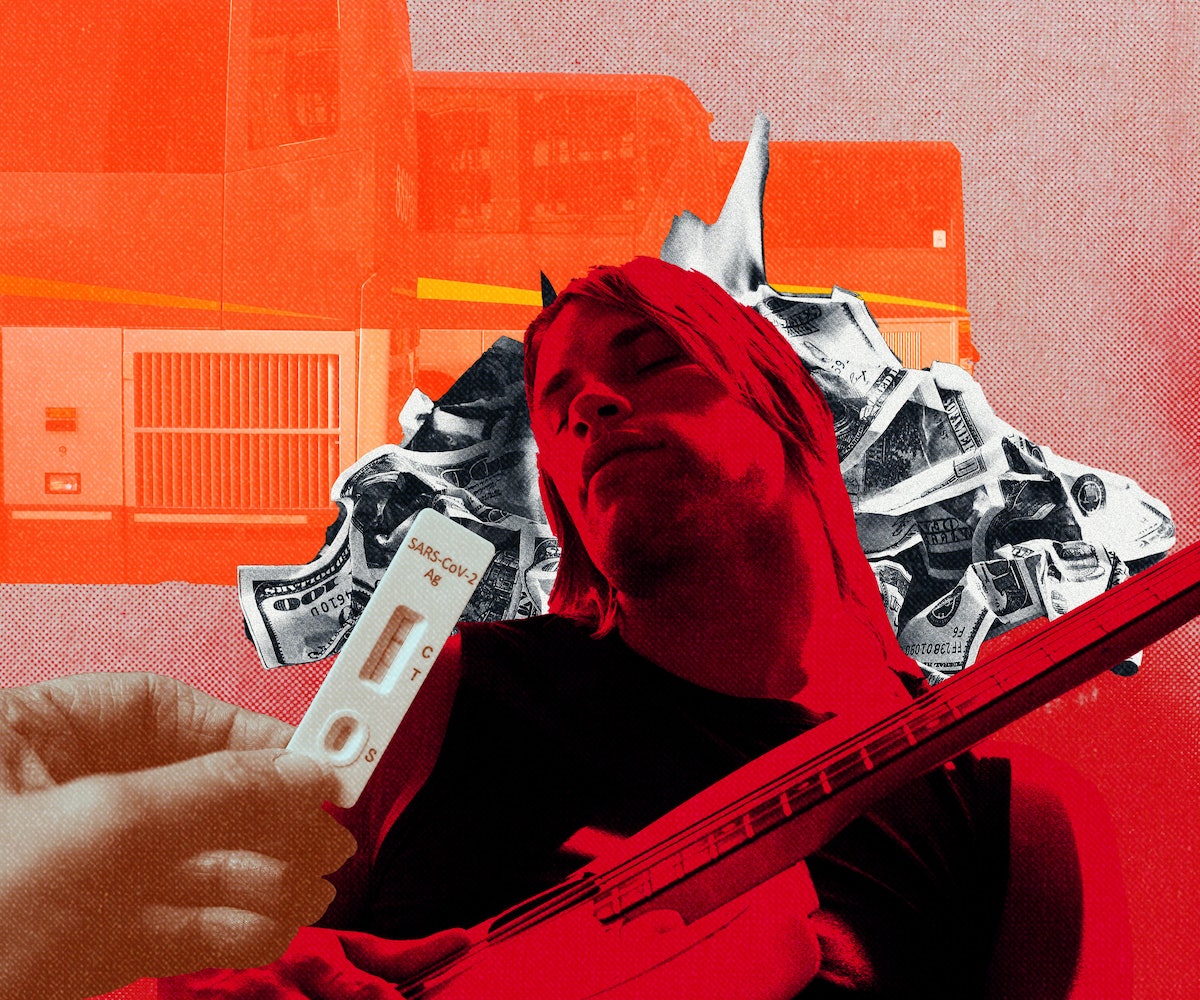 When asked about the past few years of touring, Ellen Kempner can’t help but laugh. “Sorry, but it has been comically bad,” says the vocalist and guitarist for Palehound and Bachelor. At COVID’s onset, Palehound “apocalypse road-tripped” home; in the time since, two of three tours were “totally compromised” by illness — a 17-show run with PUP that was supposed to take place this fall was quickly cut to five performances.

Since June 2021, when vaccines started to become more widely available to the public in the United States, bands have slowly started to return to the road. Touring and merch — particularly, merch sold at shows — tend to comprise the majority of musicians’ income, so it was a necessary evil for a number of artists who might’ve preferred to stay home and keep themselves safe. But a lot had changed since the shutdowns, and musicians and bands soon realized the touring world was altered; competition hit an all-time high and available resources nosedived.

In September 2022, musician Santigold announced the cancellation of her tour with a lengthy note detailing both logistical and emotional hurdles; her post was an addition to the ongoing conversation about the challenges artists now face as they both plan their tour and undergo it.

Though much of the general public is acting with the mindset that the pandemic has ended or is no longer substantially dangerous, touring artists don’t have that same luxury: the risk of contracting COVID is, for them, still a major liability. “It’s this really surreal thing where not only do I have to stay healthy as you normally would when you’re on tour, but there’s a deathly incredibly contagious disease that we’ve all just agreed to not ignore, but kind of ignore,” says Rozzi Crane, who performs as Rozzi. “Granted, I’m probably more of a neurotic hypochondriac than necessary, but it’s not unreasonable to be really concerned with staying healthy when your instrument is in your body.”

Health anxiety has become a touchpoint for numerous artists, who plan their day-to-day lives around show dates and the potential risk of illness — “Can I hang out with friends today? If my boyfriend goes to a show, can I see him after? Even doing the ever-more-common backward math of trying to stay in the clear, “if I do X now, then Y is in three weeks,” has had an effect on relationships, too, they say, if they decide to miss events or stay at a marked distance. And that’s not just limited to hanging out at home; when bands have any idle time on tour, they’ve found it harder, or altogether not worth the risk, to explore a city or see friends.

“Everybody’s still trying to make up for lost time, lost money, the music that they didn’t get to promote.”

Veteran band Bowling for Soup has limited not just the number of guests backstage, but even recalibrated meet-and-greets to be socially distanced through the end of 2022, according to frontman Jaret Reddick. Now, the band’s friends and family — who they’re used to seeing on tour — are considering the risk of COVID, so fewer people come to the show.

Nick Rahn, singer and guitarist in Groçer, laments the loss of “a place to exist.” A lot of public spaces are closed, he says, and that extends to public restrooms and other previously guaranteed amenities. He’s noticed fewer food options are available late at night — likely, he surmised, due to the pandemic’s economic impact — and the lines for those which are open are very long.

“I love touring so much, but the things I love about touring are to meet friends in different cities and on a day off, going to a really cool local restaurant, or going to see a movie,” Kempner says. “When we’re on tour, we’re the people responsible for keeping ourselves safe, and so we don’t do stuff like that [anymore]. We could if we wanted to, but it’s just not worth it to get COVID and take the huge L of canceling the rest of the tour. But both times that COVID has hit us, we were extremely careful anyway. So that’s the other thing: It hasn’t even seemed to really matter, which is really discouraging, because we’ve taken every single precaution we can.”

Kempner says touring now is “10 times more work” but struggles to define what, exactly, that work is. She lands on “more emotional work” because on the road now, they “have no vices and have no rewards and [are] grinding hard.”

Grinding has always been part of it, of course, but now there’s far less reprieve from that. And touring was lonely before COVID, too: Most of the time, bands spent most of the day traveling, loading in equipment, and then loading out equipment. The shows themselves are brief, and followed by travel again.

“Now that people are desperate to get on the road, [pre-existing tour] issues are just made more extreme,” says Alicia Gaines, the bassist and vocalist for Chicago post-punk band Ganser. Some of those issues relate to mental health, and some to finance. Then, there are other issues: Bands often like to tour with other bands that look like them, further pushing out groups with women, nonbinary people, and people of color — acts that some bookers may view as a risk to drawing the biggest crowd possible.

“For a band like us that is both female-fronted and has a member, myself, who’s Black, mixed race, that makes things just harder for us,” Gaines says. She adds that acts don’t always want to take a “chance” on adding them to the bill. “I think greater resilience is being demanded by those affected disproportionately.”

Physically, the effects of COVID rattled the music industry in a number of financial ways: There’s an oversaturation of acts vying for venues (“Everybody’s still trying to make up for lost time, lost money, the music that they didn’t get to promote,” Bowling for Soup’s Reddick says), performers (booked to accompany an artist) are charging more, inflation-spiked gas and food costs, and COVID safety has meant musicians often forgo staying with friends or fans and instead pay for hotel rooms.

Even ticket sales, according to Reddick, can be scary. People are afraid to buy ahead of time, so shows that would usually sell out might hover around 60% sold until the day of the event — which doesn’t help venues’ confidence.

“We found a lot of venues were weighing: Do we just take a private event that night instead of the show?” Rahn says.

Shows aren’t only necessary for ticket sale revenue but also for merch revenue — and even merch revenue has its limits. “[That money] starts at a booking agent and then goes through lawyers and managers, and then it goes to pay crew and transportation and costs of lights and production, which is how you’re hearing things, and cost of security and all of that before the band even sees anything,” Reddick says.

Tour buses — for bands big enough to command one — now come with problems too, according to Bowling for Soup tour manager Dave Hale. For the first two years of COVID, most of them sat unused. “Those things need to be running all the time to be well-maintained,” Hale says. During the pandemic, a number of experienced bus drivers pivoted to trucking, where work was more readily available, which has resulted in a shortage of experienced workers, according to Hale.

U.K. band Pale Waves faced “logistical and safety issues” with its tour bus that led to a full tour cancellation. “We’ve exhausted every possible option to find a new bus, but have been left with no option but to cancel these remaining dates,” the band wrote to fans on Instagram.

“Finding a bus is hard. And then when you have a bigger band like Taylor Swift or somebody that has 15 buses, and one of those buses eventually breaks down… these bus companies will take the bus from another smaller band that doesn’t have as many dates,” Hale claims. “That tour now is in jeopardy, right? That band probably can’t tour because they don’t have a bus, because bigger bus companies go for the bigger artists.” (A tour bus company did not immediately respond to NYLON’s request for comment.)

But amid all the adversities, the roads are still full of touring acts. If they can’t have as many friends backstage or meet up with people in coffee shops at least bands can convene, and commiserate, with each other.

“There’s something about the bonds that are being made right now on the road between bands that is going to be much longer-lasting and much more permanent than they used to be,” Gaines says as the one solo brightside to all of this. “Those of us that have stuck it out through all this are compelled to do so — we really, really, really want to be here. And I think that that’s really refreshing in looking around and seeing that your peers are equally compelled, for better or for worse, to be doing this, no matter how hard it is.”

She tells younger bands that touring now “is like training with weights on.” “Hopefully it’ll improve,” Gaines adds. “It’ll make normal touring seem easier, if all this ever ends.”