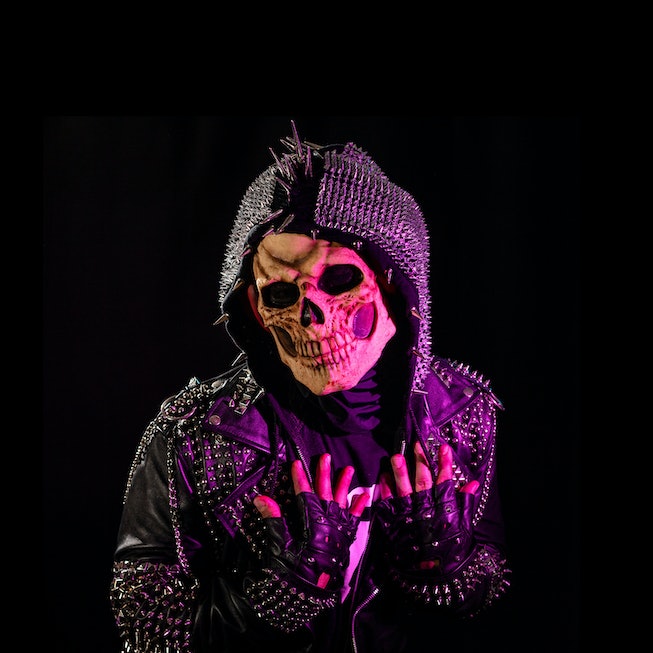 For Sarah Barrios, aka Scary Ana Grande of the spooky music collective LVCRFT, the easiest way to make a song scary is to go full “child possessed by a demon” mode. “I have what I call ‘my little gremlin choir,’ which is just some really nasally group stacks of really, La, la, la, la,” the singer and songwriter trills over Zoom. “I think those are creepy.”

Although LVCRFT’s biggest Halloween song, “Skeleton Sam,” lacks those dead-eyed infantile whispers, they are briefly employed on the group’s new album, Scream Warriors. The 15-track record created in collaboration with horror master Christopher Young is a compelling example of what a serious foray into the dark depths of Halloween music can sound like: genuinely unnerving, yet still brimming with shiny pop moments.

Over the last four years, the Los Angeles-based collective of hitmakers and music industry aces has become a major force in shaping the modern sound of Halloween. Loosely formed in 2018 by its core team who aptly refers to themselves as the Slasher 7 — Deepkutz (Amanda MNDR Warner); Scary Ana Grande (Sarah Barrios); Lil Punkin (Evan Kidd Bogart); Norman Crates (Peter Wade); Count Trackula (Justin Gray); DejaVudu (Trevis Romell); Scariachi (Jarrad Moreno); Evil McQueen (Bonnie McKee) — LVCRFT initially began as a reaction to having gotten sick of hearing Ghostbusters and “Thriller” every October. The group has kept a tradition of releasing one spooky-themed album every year, and now, their passionately creepy tunes have shaken the industry, leading to an absolute explosion in the Halloween music cottage industry, and cementing the band as a figurehead for all things Halloween-music related; If you went to a Spirit Halloween store, Long Beach’s Shaqtoberfest, or Haunt O’ Ween this year, you likely heard LVCRFT.

“There was a huge void in the marketplace,” says co-founder Amanda Warner, on what the Halloween music scene looked like in 2018. “Rewind four years ago, there were three of us doing this. Basically, four years ago, it was Kim Petras and us.”

Now, the collective is trying something new with Scream Warriors, an album that expands how one can experience music for Halloween. “There's this whole spectrum of what Halloween and scary and spooky songs sound like,” says Sarah Barrios. “This last album that we put out definitely feels like a very serious kind of adult contemporary-sounding thing. You could play it in a haunted house and scare the shit out of people. It's a completely different feeling.”

If you assume the entirety of Halloween music to be dancing ghosts and skeletons, think again. Per Warner and Barrios, the goal of Scream Warriors was to absolutely terrify like a horror movie but for it to be an experience one could undertake solely through listening. Having Young on board, who scored Hellraiser, The Grudge, Drag Me To Hell, and many more, was a major help as his 40 years of industry experience helped the group nail the album’s immersive quality.

“He does sound design, sort of like Trent Reznor-Atticus style,” Warner says. “But he also is a film composer trained in orchestration. I really pointed him into those two directions. I was like, ‘Would love both of your styles here because you're brilliant.’”

“Horror is not just scary stuff. There's emotions you have to evoke within the listener.”

Barrios, who can be heard on most of the numbers singing or voicing various characters (on “Gina’s Casket” she is the nasally-sound teen name-dropping 666 Elm Street), says the emotional arc of the record was also hugely considered. “Am I building that fear from the beginning? Am I starting with fear and then going to comfort for a second,” she says. “Are we safe for a second? This person listening to it, what do I want them to feel like they're doing, visually?”

It may seem like a lot of thought to put into a potentially novel listen, but the result speaks for itself: The record bangs but also bristles as tracks oscillate from dark and strobe-y pop numbers that you’d imagine Vampires raging to in a warehouse, to scene-setting, expository cuts full of slithering slicing synths, out of tune piano, and demonic, indecipherable whisperings.

On a larger scale, Barrios and Warner see Scream Warriors as a huge step in legitimizing the understanding of their craft, which they say was met with eye-rolls by their respective teams when they first started out in 2018. “I don't feel like people understood what [we] were doing right away until four years in,” Warner says.

“People like the idea of spook season,” Barrios adds. “And I think there's this idea of what Halloween is. It's pumpkin spice and leaves falling, which is a vibe for sure. But I think [LVCRFT] has shown me horror is not just scary stuff. There's emotions you have to evoke within the listener. I want the people who go apeshit for Christmas music to hear [our] Halloween music and be like, ‘Oh, This is my Nat King Cole for Halloween time.’”

On the other hand, they both agree LCVRFT’s outsider position in the industry lent them bountiful room to run free with the music — with no real rules to follow. On a wider scale, they see themselves and their music as a haven for all outsiders, black sheeps, oddballs and weirdos of the world. “Horror culture is outsider culture,” Warner says.

Halloween might be over for another year, but the spirit of holiday can remain evergreen and enduring if you just lean into it, with some help from LVCRFT.

“We're creating a space where it's like, ‘Come here and be a f*cking gargoyle if you want,” Barrios says. “Be whatever you want. Eat a bucket of candy and just vibe out.’”

LVCRFT’s ‘Scream Warriors’ is out now.