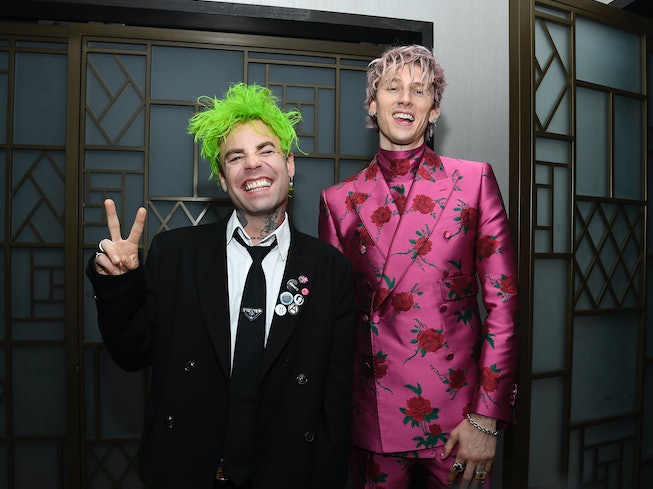 We’ve all been there: It’s the beginning of a relationship and you’re overanalyzing everything. Each punctuation mark, every second that passes when they don’t respond, the choice of emojis. Spiraling is only natural. Most would frantically text a friend or fire off a thirst trap while waiting for a text back, but Machine Gun Kelly takes it to the next level: He writes a whole movie.

On Friday, Kelly (going by his given name, Colson Baker) and best friend Mod Sun will release their directorial film debut, Good Mourning, a stoner comedy for the Instagram generation about a fictional movie star, London Clash, who gets derailed on the day of the biggest audition of his life when his famous actress girlfriend (played by Becky G) sends him a text message reading, “Good mourning,” and he subsequently stops responding. Marijuana-fueled chaos ensues. The film is based on the very same text message Baker once received from his IRL famous actress girlfriend (now-fiancée), Megan Fox. By the time she texted back, Baker and Sun had written basically the full script of the fictionalized sliding door of the scenario (the real-life version also being marijuana-filled). But instead of leaving it at just that, a stoner fever dream, the duo transformed it into a real film, co-starring the likes of Dove Cameron, Whitney Cummings, Pete Davidson, and Fox herself.

Ahead of the film’s release, Baker and Sun hopped on Zoom to discuss the perks of spiraling, trying to cast Brad Pitt, and what they really think of superhero movies.

You both are very busy people. How did this thing first get put into motion?

Colson Baker: I received the text “good mourning” from my now-fiancée before we were actually dating and was really confused by it. And then she didn’t bring her phone to Europe where she left for right before she sent the text message. I kind of was just deciphering it, like, “OK, what does this mean?” I went to all my friends who aren’t in relationships and they were trying to give me relationship advice, which completely backfired. Then my brain started to go down the rabbit hole, so instead of fully spiraling, I just decided to start writing a movie. I texted Mod at 11:11 saying, “Hey, do you want to write a movie?” and because it was at that time, he was like, “This must be a sign.” So he came over and we started writing a movie. Goddamn, that [answer] was too long.

Mod Sun: No, that was great.

Are you both superstitious people?

C.B.: I’m so convinced that there’s God and aliens and all these things; universal language and synchronicity and serendipity... it’s too much. Especially past lives, all that sh*t. Everything is in alignment for a reason and I feel like we’re two vessels of creativity who are brought together for a reason and I feel like comedy is very overthought. It almost hurts my brain, trying to understand certain comedy now and I just want to go back to laughing at gags and things where you can kind of just turn your brain off but still be entertained by a great story.

M.S.: So yes, you are superstitious.

C.B.: Jesus Christ. I need a sewing machine in my mouth.

To your point, some would say the art of just a straight-up stoner comedy has been lost for many years.

M.S.: We kept saying to ourselves, you get one great stoner comedy once every five years, and we were looking for it and thought, “Let’s just write one.”

Was that the intention when you sat down? Did you know you were going to sit down and write a stoner comedy from the beginning?

M.S.: I think [Baker] really wanted it to turn into a comedy. To be honest, I was just being a really great friend and wanted to keep his mind off of his relationship that he thought was falling apart, which it wasn’t. It’s human condition that what you don’t know [becomes] the story you create in your head. So that’s where my mind went. He really wanted to make a comedy and it kind of morphed into that and lives in maybe both worlds.

C.B.: Yeah, and I was high. So it naturally became a stoner comedy because it was kind of like life imitates art… I was just baked.

How much had you written before you got a text back?

C.B.: The whole movie was done pretty much.

M.S.: Dude, he was spiraling really hard. I was like, “Let’s just keep writing and continue doing this.” So a lot of the movie was written before he got a text back.

How quickly did you admit to Megan that you had spiraled and written a movie? Which, by the way, is a new level of spiraling.

M.S.: Then we gathered a group of people, broke into the roof of the Roxy, and recited it to a group of our friends, and you were definitely still spiraling. So I’m pretty sure we wrote the whole movie.

C.B.: I read the whole movie to her on her doorstep. She came back from that trip and before she even walked in her own house with the bags, I was like, “Stop right here. This is what you not answering me has done. ‘Page 1, London Clash wakes up...’”

M.S.: We’re really lucky you guys made it.

You’re a real testament that spiraling can not only work out in a relationship, and now we have a movie to show for it.

Was there ever a point where you were, “OK, we did this to get my mind off of it. We’re not going to make this into an actual movie,” or—

C.B.: It went stagnant for a couple months. We tried to pitch it.

M.S.: Some people told us that there’s no way they were ever going to let us direct a movie. “Great script. There’s no chance you’re directing this.”

C.B.: Then they tried to get people in to rewrite the script. They sent these one guys, we went and looked up what sh*t they did. It was a movie with negative-five-star rating. I was like, “Homie, what?” How do you think we can’t write something better than what these f*ckers...” It might have been Mod spiraling that we finally were like, “All right, we just need to make this movie.” It re-kick-started the whole thing.

Did you find it more difficult to actually film the movie than it was to write it?

M.S.: I thought there was going to be, I don’t know, maybe six to 10 people on set. Then we showed up on the first day and there’s a lot of people there and that’s when I realized, “OK, they’re really relying on us to do good here.”

C.B.: There were people in suits. And clipboards.

How did you eventually figure out the casting?

M.S.: By picking up our phone and calling people, legitimately. Every single person was cast by me and Kells getting on the phone with them and rambling on and on for 30 minutes, reciting the whole movie.

Whose schedule was the hardest to work around?

M.S.: That was to the minute. And his ended up being the last day of filming because we kept having to move the day. By the way, behind your back, everyone was like, “Yo, Pete’s not doing this.” And you were the only person that was like, “Dude, that’s, like, my best friend. He’s going to be there.” Even I was like, “He’s not doing this.”

C.B.: His agent was saying it at one point, “It’s not going to work.” And I kept saying, “Trust me. It’s going to work.” He flew in, landed, and was like, “Dude, I haven’t slept.” And I’m thinking, “We’re squeezing all your scenes in one day. You have a 16-hour shoot day.” I told my assistant, “Get Pete whatever he wants. Fill him up with food. Fill him up with coffee. Give him all the weed he wants.”

Was there anyone you couldn’t get?

M.S.: You kept thinking we were going to get Brad Pitt.

C.B.: Yeah. I was convinced we were going to get Brad Pitt for a scene.

M.S.: He was going to be Danny Trejo’s part, the method actor.

C.B.: Brad Pitt did that scene in True Romance where he was the stony roommate. I was like, “Oh, like, he’ll do this one for the culture, man.” Like, yeah, the biggest actor of all time…

What scene in the film are you most proud of?

M.S.: I’ll say I’m the proudest of the breakup scene between Kells’ and Becky G’s character. I mean, I’m a big fan of his. He’s my best friend, and I also admire him in a lot of ways — sorry, dude, I’ve got to be serious for a second. Watching him do a serious scene like that, I was just like, “Damn, man. He’s really, really good.” And Becky G killed it. That was essentially a one-take.

Colson, did pretending to audition for Batman in the film give you the itch in real life to try out for Marvel or something?

C.B.: You know, I’ve tried and I just think… let’s just say I’m not a church boy. When I look at those giant press junkets and all these all-American hero people who are really probably pieces of sh*t behind the scenes… you know, I’ve worn it all on my sleeve in front of everybody. So at any point, anyone can just be like, “This is your superhero? Look at him stuffing mushrooms down his face right here.” I don’t know. I’m good.

Do you think you two will partner on another movie soon?

C.B.: None of my spirals recently have led me to the typewriter.