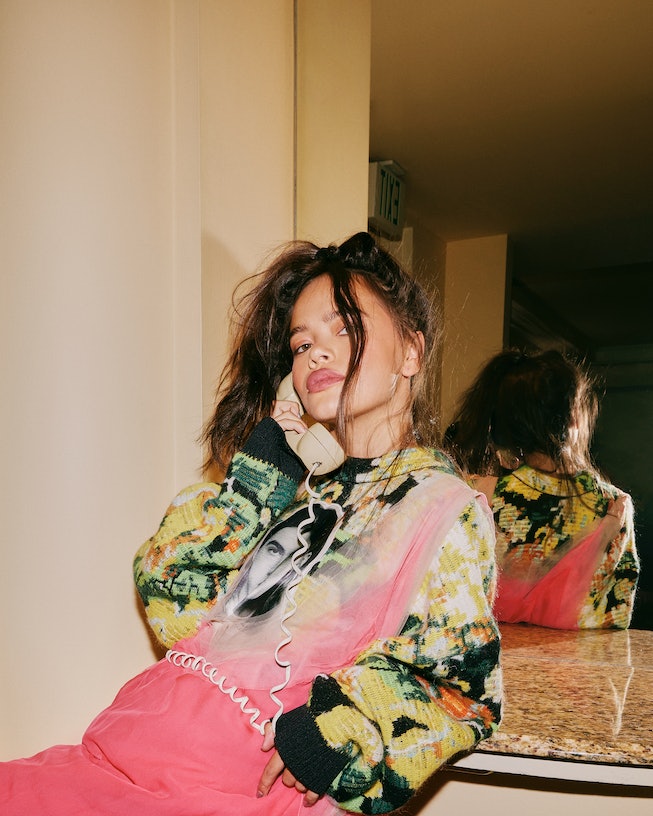 Before her first day on set of Pretty Little Liars: Original Sin, Malia Pyles took a page out of A’s playbook: she stalked her co-stars. “I went on my burner account and was watching them on [Instagram], which sounds so creepy,” the 22-year-old actress says. As the last of the show’s five titular liars to be cast, she had the luxury of doing some research before she landed on set in upstate New York, where co-stars Chandler Kinney, Zaria, Maia Reficco, and Bailee Madison, had already started preparing. “I could see that they were meeting and they were embracing and they already were just so wonderful about celebrating each other. It's so crazy, but I even saw in their comments with their pictures, they were like, ‘Yes, girl, you go.’ And I was like, ‘Oh, I hope they like me,’" she continues. “I haven’t told them this.”

Cut to now, chatting on ZOOM just days away from the show’s late July premiere, and Pyles not only has four new best friends, but also a buzzy show under her belt. Original Sin, streaming weekly on HBOMax, is a continuation of the Pretty Little Liars franchise you know and love — that is, if you love a creepy anonymous stalker harassing high school girls — but with a 2022 update. The cast this time around is more diverse in both its casting and storytelling. Like Shay Mitchell’s Emily in the original, Pyles’ Minnie “Mouse” Honrada is both Asian-American and queer. Unlike Mitchell, Pyles herself also identifies as queer — a first for the show. “They were looking for someone that was Asian-American and who was queer. I am both of those things,” she says. “I've been in this industry for at least 10 years now, and there's been such a shift in even the last five years about inclusivity. But it's still few and far between the times to see yourself represented on screen.”

Here, Pyles talks about honoring the original series, getting scared on-screen, and why A is the world’s worst therapist.

You auditioned almost exactly one year ago to the premiere date. How did you first hear about the reboot?

I heard the buzz about Pretty Little Liars and I just knew I had to be a part of it. I heard about it from a friend and she actually showed me the character breakdown for Mouse and was like, "This is perfect for you." And I'm like, "This is perfect for me." Of course, being a fan of the original and the impact those girls had on my generation — I mean, they're absolutely iconic. To think that I could be a Liar was always something that felt so far away. When this process began, it was a lot of me having to trust myself and confidence-building and feeling okay saying that I can own this role and I can be that girl. And it's been wonderful coming into myself as a young woman and also as an actor and having such a wonderful ship to jump on. And it's been just a really crazy, wonderful whirlwind.

What about the character when you read it was like, "Oh, I should play this person?"

Initially it was the fact that they were looking for someone that was Asian-American and who was queer. And I am both of those things. I think being a part of this industry, I've been in it for at least 10 years now. And there's been such a shift in even the last five years about inclusivity. But it's still far and few between the times to see yourself represented on screen. And for me, it was instantly like, "Oh, it's so freaking cool that they're taking this known IP and making a new show and having someone that looks and identifies the way that I do. And whether it's me or not, I'm so happy that is a step that we're taking." In the original Shay Mitchell, who played Emily, was also Filipino and played a queer role. I mean, that was so impactful for me and one of the first times either of those things were represented on screen for me. And so to think that they were passing that torch onto a new generation was really exciting.

The original wasn’t that long ago, so it’s nice to see the progress in casting even from that point.

Absolutely. And I think it's really important that we're exploring different types of queer relationships as well. Something that I really love about Mouse is that we meet her and she's already out. And her journey is more about finding community, but not about finding herself as much. It's a nice contrast to be able to tell a story where the person is already accepted and celebrated and it doesn't have to be a bad thing. It doesn't have to be you being kicked out of your house because I mean, that's our culture now.

Aside from my character, it's really special that all five of the girls, we all come from such different backgrounds as actors and people but also our characters. And so it's also a story about five people that are so different from each other, finding strength within each other and understanding each other, despite them not having that much, at least on their cover that they can relate to.

This group has a bit of a Breakfast Club origin story, where these are five strangers being pushed together.

I really do adore the original and it's been wonderful to build off of that world. And at the end of the day, we are still existing in the universe that they created. We're just having another take. We're looking through a different lens. It's like, what would five strangers do if they were all targeted by the same person? Rather than what would five friends do? And so it's been a really wonderful exploration about the human condition and then how people deal in extreme circumstances, especially young people.

How much do you consider it to be its own entity, and how much is in the back of your mind about what has happened in this universe already?

I think it's really important that we always paid respect to the original. There's a lot there for fans to enjoy who are fans of the original. I mean, there's a lot of Easter eggs and things to be found throughout our season that connect back. And, again, what was so great about the show and why so many people and why I loved it was that there was so much heart and so much love. I think any great show or horror show, especially it's you have to find the love between the relationships before you can find anything else. It was important to make sure that we stayed true to the friendship and to loyalty. It was really wonderful to create a project where everyone was just really excited to be there because everyone was such fans of the original.

There was never a moment that went by that wasn’t like, "Guys, can you believe that we're all here together? This is so weird." And this is fulfilling so many childhood dreams. Although our show, of course, is a new story and does differ from the original, especially, of course, playing within the horror elements and paying homage to slasher flicks and heightening those troupes.

Now that it’s finally being released into the world, how are you feeling?

The group chat is popping off. Every single time something is released into the wild, we're like, "Oh my gosh, how insane is this?" And just congratulating each other. There's not a day that goes by that I don't get a text or send a text to one of the girls just being like, "Look, I'm so proud of you. At the end of the day, whatever happens, we did this and we did it together and I am so proud of the growth that we were able to experience as a unit throughout this process."

I think the best part of this experience really is just the fans are just so warm and supportive. You always want to do right by the original, with this show in particular; it was so special for so many people. From the beginning of this process, to really have such a wonderful response from the fans and for them to genuinely care about who we are and embrace us... I think it makes it easier for all of us to be able to celebrate the thing that we're doing as fans, too. We're like, "Hey, we're all the same. We're all on this ship together."

I think the most surprising thing about this new show is how much more this leans into straight up horror, whereas the original was a bit campier.

When I read the script, it threw me for a loop. It was also so exciting to be able to explore the A plot line in a completely different backdrop and the genre as a whole. It's my first time playing in horror and I've always wanted to. We have such a detailed creative team as well, who really made sure to create a full picture before we dived in and build such a wonderfully different and dark and twisted playground.

It's really fun being part of an ensemble piece because we all have our own storylines as well as the main storyline. And so we're filming our pieces, but we don't get to see the others. So when we see it, it's like, "Oh my gosh, how did you pull that off?"

How would you describe this iteration of A compared to the original?

Since we are paying homage to so many ‘90s slashers, it's definitely more of a Mike Myers figure. Instead of lurking in the shadows, they want to be seen. They want their threat to be felt. I definitely think it colors our show in a lot of new shades to see how does one deal with that when the presence that they feel threatened by is so accessible, but yet also not at all?

It was really something else to see the mask for the first time. It is grotesque. It is visceral. It is just — there's no way to be confronted with something like that and not have an instant reaction to it. I think what's really cool about our A as being different is it's still an anonymous figure, but the way that they choose to make their presence be felt is what is so different and so rich, too.

We also actually see this A in the flesh from episode one, which is somehow even creepier than them being completely anonymous.

They just have so much confidence. They take no prisoners. They're just there. And you can't look away. Whether you want to confront that thing, they’ve been given no choice. I think that stands as a metaphor for growing up and being a young adult and then having to deal with very adult issues at times. Whether you want to or not, sometimes those choices and those crossroads are forced upon you. It's something that as a young person, it's difficult to reconcile, but it's also how you find your strength — by being put in positions and circumstances that are outside of your safety net. As terrifying and scary and evil as A is, I think they're really the reason that these girls are able to find their strength and take control of their lives and confront the issues that have always been in the background. It's taking this figure and this threat, and it's almost acting as a catalyst for these characters and these people to strengthen the bonds and their relationships while also finding their independence.

It’s almost like A is the world’s worst therapist.

That's exactly what I was going to say.