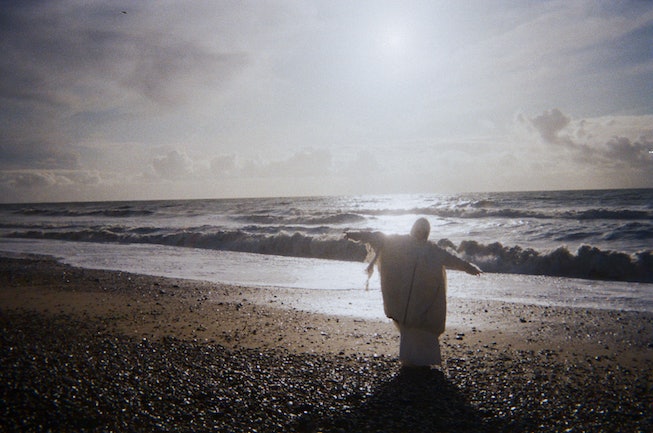 Escape from the ceaseless bombardment of social media and peer into the world of French composer Malibu; it is quiet, languid, and forgiving, all of which rare commodities these days. The experimental ambient project of 24-year-old Barbara, Malibu's vast sonic universes function like extended periods of rest. Her most recent project, November 2019's mini-album One Life, charts the movements of the ocean, with Malibu using lush orchestral strings and long stretches of droning synth to build atop roaring wave samples.

On Wednesday, NYLON premieres the visual for "Camargue," the project's shortest but most dynamic cut. Accompanying the song's slow build and Malibu's misty vocalizations are meditative scenes taken from London's Seven Sister's cliff — milky ocean froth, a stray seagull, and a cozily-bundled figure standing by the water. Shot by filmmaker Daniel Swan, the video is a quick escape to somewhere decidedly Not Here, where the sun is shining and the world is unhurried.

Of the song, Malibu wrote: "The idea was to imitate the landscape and its life — from the muddy-wet dark sand, to the creamy cliffs and the sea's foam, to the bright white feathers of the seagulls — be one with the environment there, be its echo."

Malibu first made a splash with her vibrant contribution to Berlin-based label PAN's acclaimed 2017 compilation project Mono No Aware. Watch "Camargue" below, and read on to learn a bit more about Malibu.

I am at home, high opaque white veils surround me, watching a film called Agnes of God, mostly to try and narrow down my Letterboxd watchlist. I am wearing a white polar fleece dressing gown and am tucked under a patchwork plaid I clumsily made last week.

What drew you to making music, specifically this very visceral kind of ambient music?

I got into making music around six years ago after meeting this girl who was and is a musician. I loved how she used music so simply and naturally, like a language she knew just as much as her mother tongue. So I became interested to speak that language as well, became more attentive to the music I listened to, its details, the one little thing I liked here and there. I started stretching bits of tracks I liked with Audacity, adding tons of reverb, recording some vocals through the laptop’s microphone, adding more reverb. In a six-year time frame it was rather interesting to see that regardless of the mild experiments I did musically, I was never really able to break outside the zone of… reverb, strings, choir, stretch, soft piano, spoken words.. I can’t really explain it, I just love nice airy melodious things. I guess I did make my own little language.

Your description of this track and video is very place-based. Was there a specific memory or location you were thinking about when you were composing the song?

The record as a whole was inspired by The Piano by Jane Campion, but I would try not to think too much of it, I didn’t want to be stuck creatively because of my own expectations of perfection. I would wake up, sit with my laptop and work without overthinking everything. Usually I would kind of plan tracks, the title, the feel, the length. But this time I assigned titles to tracks after I was done with the record.

I thought of "Camargue" because it was in my list of words I like and it seemed like a good fit for a few reasons. Camargue is a wetland in southeast France where one of my favorite films growing up is set, Happy He Who Like Ulysses. It has beautiful horses and flamingos. My grandparents happen to live right next to it, in a cool futuristic '70s city called La Grande Motte. And it is also the name of CJ Bolland’s classic track.

This song is very transportive — if you could go anywhere in the world, where would you like to be at this moment?

Well, if I could, I would like to wake up in New Zealand, or anywhere in Polynesia really… and drive an all-white 1990 Pontiac Firebird on an empty beach.

What's the last book you read that made a big impression on you, and what did you learn from it?

It’s not recent at all and I never thought I’d say this, but the book that probably has had the most impact on me in various forms was a book that I studied in high school called All The Mornings of The World from french novelist Pascal Quignard. I used to make fun of it a lot with my schoolmate as we had to study the book and the adapted film. But it grew on me, I adore the title and recognized its beauty more and more as time went by and very often think about its quotes, its light, its complexities and contemplation. It’s about music, mourning, regrets, life, solitude, redemption… all these little things.