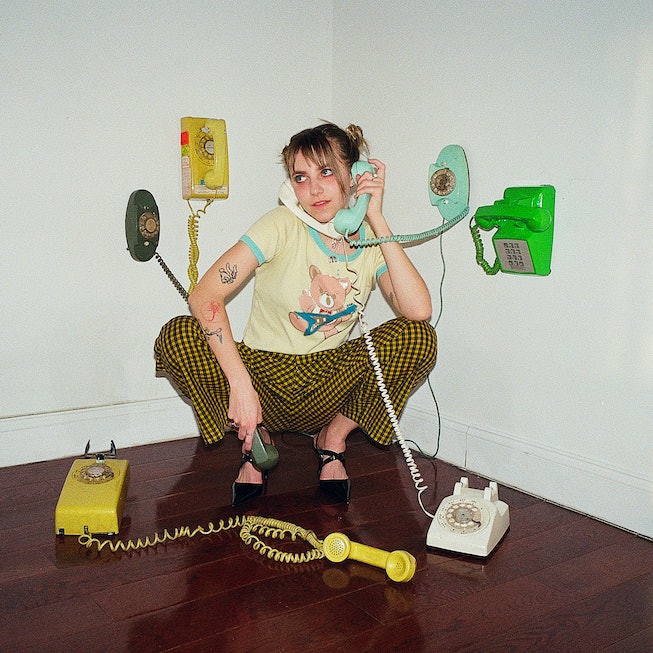 It’s hard not to immediately fall into the trap of May Rio’s “Butter,” a coy little pop song that she’s premiering Tuesday on NYLON, below. It’s the lead single from the New York musician’s upcoming debut solo album, Easy Bammer, and it’s a gorgeous one at that — with melting, glowing synths and a melody that skips into place when the beat kicks in. Rio sings about surreal-feeling things like long stretches of summer and wasting time away in front of the television, and her lyrics sound like adult nursery rhymes: “Simpler to be an echo than to talk/ Fuck the police, everything’s fucked/ Butter and oil to make it go down/ Everything’s better with butter around.”

Rio — real name May Rio Sembera — is also in another band, Poppies, her time touring in which partially inspired the tracks on her upcoming project. The Brooklyn four-piece has put out two EPs of scrappy indie rock about misfit feelings, and you can sort of hear those roots in the songs she’s putting out now. “Butter,” however, gleams with its own allure, one that feels evolved for the singer and guitarist.

“I was housesitting in Texas when I wrote ‘Butter,’” Rio writes in an email. “I was thinking about this idea (myth) that a lot of people have which is: if you only had an empty desk, and everything crossed off your to-do list, it would be so easy to sit down and write. But it's not that simple; there's not really an ‘if only’ that works like some magic formula. In ‘Butter’ I was confronting this. Before I wrote this song, I wasn’t doing much on piano. Being the most synth-heavy song on the album, as well as the opening track, it’s a first look at a new sound and project for me.”

Hear “Butter” below, and look out for Easy Bammer coming June 25.

NEXT UP
Entertainment
Taylor Swift Revealed Another 'Midnights' Track Name
Entertainment
Paramore Finally Has A Release Date For New Music
Entertainment
NCT 127 On '질주 (2 Baddies)': "I Think We’ve Truly Shown Who We Are Now"
Entertainment
Getting Ready With Pale Waves For Their 2022 New York City Concert