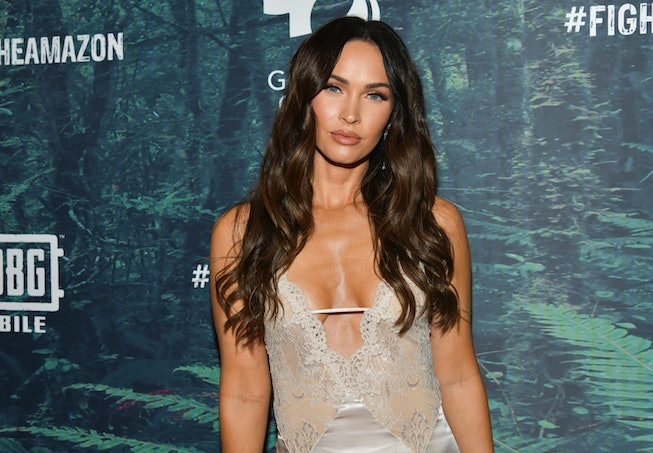 Over a decade ago, in 2009, Megan Fox sat down for an interview with Jimmy Kimmel and shared an anecdote about her experience auditioning for Michael Bay to be an extra in Bad Boys II — a role she ended up booking. "They were shooting this club scene and they brought me in. I was wearing a stars-and-stripes bikini and a red cowboy hat and six-inch heels," she recalled. The only problem? Megan Fox was only 15 at the time, and legally, she could not sit at the bar nor could she have a drink in her hand on camera. "His solution to that problem was to then have me dancing underneath a waterfall, getting soaking wet...so that's sort of a microcosm of how Bay's mind works," she continued.

At the time, Fox was clearly recalling the experience to be somewhat inappropriate, but rather than comfort or affirm her, Kimmel chose to offensively joke back, "Well, that's really a microcosm of how all our minds work. Some of us have the decency to repress those thoughts and pretend that they don't exist." The clip has recently resurfaced on Twitter, prompting an entire viral discussion about the many ways Megan Fox has been wronged by Hollywood, with many users stepping up to defend the Jennifer's Body actress. But after reading some of things her fans were saying in her defense, Fox took to Instagram to set the record straight on some of the things she feels have been misconstrued about her experiences.

"I know that a discussion has erupted online surrounding some of my experiences in Hollywood and the subsequent mishandling of this information by the media and society in general," her Instagram post, which spanned five slides, began. "While I greatly appreciate the outpouring of support, I do feel I need to clarify some of the details as they have been lost in the retelling of the events and have cast a sinister shadow that doesn't really, in my opinion, belong."

At one point, Fox reconfirmed her experience working with Michael Bay on Bad Boys II, noting, "I was around 15 or 16 years old when I was an extra in Bad Boys II. There are multiple interviews where I shared the anecdote of being chosen for the scene and the conversations that took place surrounding it." However, Fox also clarified that, when it comes to her experience working with the director again for Transformers, she was actually an adult, about 19 or 20. "As far as this particular audition story I was not underaged at the time and I was not made to 'wash' or work on someone's cars in a way that was extraneous from the material in the script." Later, she came to the defense of Bay, writing, "When it comes to my direct experiences with Michael, and Steven [Spielberg, an executive producer for Transformers] for that matter, I was never assaulted or preyed upon in what I felt was a sexual manner."

Towards the end, Fox made sure to thank those people online that have been standing up for her, even if they were misrepresenting her experiences. "Please hear me when I thank you for your support," she wrote, before hinting that she has other career stories that are much more traumatic. "These specific instances were inconsequential in a long and arduous journey along which I have endured some genuinely harrowing experiences in a ruthlessly misogynistic industry," she said. "There are many names that deserve to be going viral in cancel culture right now, but they are safely stored in the fragmented recesses of my heart."

NEXT UP
Entertainment
Lindsay Lohan Teases Her Return To Film, 'Falling For Christmas'
Life
Julia Fox Calls Ye “The Most Lit Rebound Ever”
Entertainment
A New Trailer Explores The Dark Side Of 'Barney'
Entertainment
Paul Mescal & Emily Watson On The Quiet Depth Of 'God's Creatures'