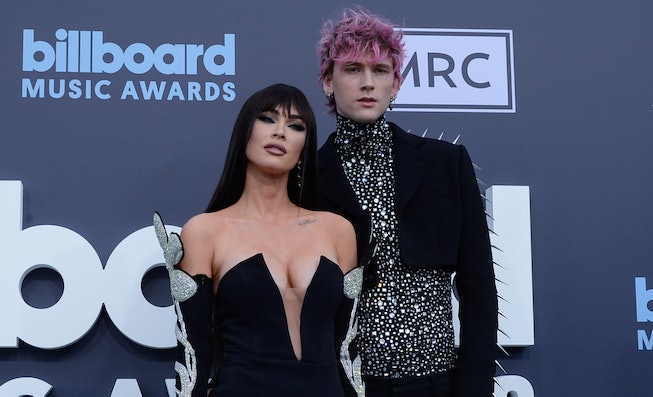 What would you do for love? It seems just about anything goes for Megan Fox and Machine Gun Kelly, who famously drink each other's blood (for ritual purposes, of course), make out on every red carpet, and post endless couple photos to express their affection. The newly-engaged couple loves sharing details about their relationship, and at this point, we’ve come to expect it. But Fox’s latest drop of information — which includes a jumpsuit, scissors, and some wishful thinking — came as shock to us all.

Over the weekend the couple traveled to Vegas for the Billboard Music Awards, where MGK performed live and dedicated a song to his “wife” and “unborn child.” Following the festivities, Fox shared pictures of their trip on Instagram. “An introvert in Vegas for three days during eclipse season,” she wrote as the caption. “Just SO much crying in the shower.”

The photoset begins as most celebrity weekend recaps do, with a glamour shot. In the first photo, we see Fox and Kelly cuddled up in matching baby-blue outfits. The next picture includes a closer look at Fox’s sparkly blue jumpsuit and flawless smokey eye. Then as you scroll to the right, expecting to see maybe an afterparty shot or outfit change, you’re met with a little surprise.

Fox included a screenshot of a cheeky text exchange with her stylist, who supplied the glittering ensemble. “Was this blue outfit expensive,” Fox asked, “because we just cut a hole in the crotch to have sex.” Her stylist, Maeve Reilly, was seemingly unphased by their theatrics. “I hate you,” she replied with three laughing emojis. We may never know if the look was pricey or not, but luckily, it won’t end up in a landfill anytime soon. Reilly's next message confirmed that she would be able to mend their steamy alterations. “I’ll fix it,” she wrote.

The rest of Fox’s photo set continued as normal with another makeup shot and outfit check, but fans of the actress were not ready to let her raunchy-anecdote slide. Instagram users flocked to the comments to discuss, laugh, and beg Fox to share just a bit less. “Everything I know about this relationship has been completely against my will,” one account wrote.

Honestly, same — but I’d be lying if I said it wasn’t a bit entertaining. These two have made it clear that they’ll never pass up an opportunity to remind us that they’re obsessed with each other. And if that’s not the perfect, campy, Hollywood romance, I don’t know what is.

NEXT UP
Culture
The Cutest Couples At The 2023 Grammys
Fashion
Jenna Ortega Is The Face Of Adidas’ Newest Line
Culture
Caroline Polachek In KNWLS & More Party Photos You Missed
Fashion
The Wildest Front-Row Looks From Couture Week In Paris
Style + Culture, delivered straight to your inbox.