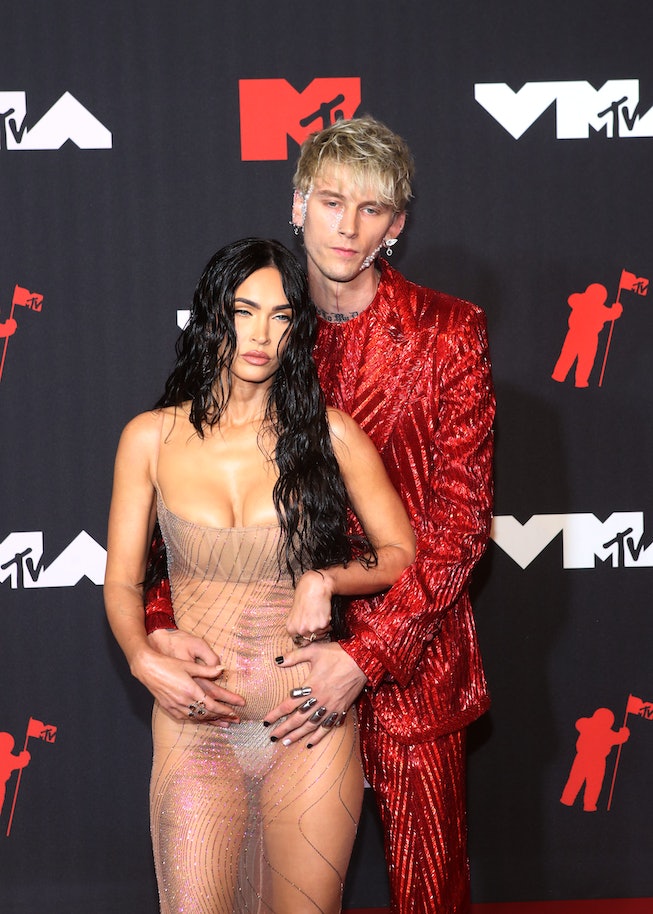 Megan Fox and Machine Gun Kelly are completely, irrevocably obsessed with each other, and like most people in love, they’ve become prone to giving sweeping declarations about their devotion. Since they can’t physically shout about their once-in-a-lifetime connection from the top of a mountain, they have to do the next logical thing — gush about it in every interview.

The couple’s carnal attraction is obvious from the many photos of their tongue-first makeout sessions (usually alongside Hollywood’s other deeply in love couple du jour, Kourtney Kardashian and Travis Barker) but on a more spiritual and emotional note, it’s clear that they also have a genuinely level of respect and awe for one another. Fox and MGK began dating in May 2020 after officially meeting on the set of the 2021 thriller Midnight in the Switchgrass, and since that fated day, their loving proclamations have become increasingly grandiose and tender.

These two are not shy in the slightest (again, public, tongue-first makeout sessions) and have yet to show any reservations about the intensity of their romance. According to Fox, her and MGK have “the kind of sex that would make Lucifer clutch his rosary,” and that’s just one of their many bonkers, loved-up statements to date. And just in case you needed an unofficial guide to all the over-the-top and totally in love things Fox and MGK have said about each other, you’re in luck with a full timeline, below.

MGK: "It's no secret. I think feet are beautiful. And I think Megan has the most beautiful feet that exist."

If you have beautiful feet, it’s your God-given right to brag about it, and it’s even better if your boyfriend can do it for you. MKG gushed about Fox’s feet — which stepped on his face — in his "Bloody Valentine" music video.

MGK said that during the shooting of Midnight in the Switchgrass, he would wait on the steps of his trailer every day "to catch one glimpse of eye contact" from Megan. He continued: “She would have to get out of her car. There were like, five steps between the car and the trailer. And I would just sit there and hope."

In the couple’s first joint interview, MGK gushes like a sad puppy, but to be fair, this is probably what anyone whose ever been in a movie with Fox would say.

Fox: "I knew right away that he was what I call a twin flame. Instead of a soul mate, a twin flame is actually where a soul has ascended into a high enough level that it can be split into two different bodies at the same time ... So we're actually two halves of the same soul, I think. And I said that to him almost immediately, because I felt it right away."

I don’t know what else to say except wow.

"Achingly Beautiful Boy … My heart is yours.”

Has there ever been a better debut couple post? Why the title case? These are burning questions.

MKG: "I didn't know what [love] was until me and her made eye contact. That's when I was like, 'Whoa.'" He continued: "After I made the big chunk of the album, I did fall in love for the first time. That was my first experience with being open to love and stuff like that. I definitely wasn't set up to believe that that's something that could ever exist."

There’s something wildly wholesome about a man who literally told Megan, “I am weed,” upon first meeting her, talking to Howard Stern about love at first sight.

Fox: "Loving him is like being in love with a tsunami or a forest fire. The intensity of merging with him is just overwhelming, and the threat it poses is so powerful but so beautiful that you have no choice to surrender with reverence and with gratitude."

If only we had footage of this mythical first time they made eye contact, which seems to have opened up the gates to Hell, one where Lil Nas X is grinding on the devil when he’s not clutching his rosary in fear at Fox and MGK’s sexual appetite.

Are these their wedding vows? Has anyone ever been more in love than them?

“a life without you is worse than death, put a bullet in my head if we have nothing left 🔪🫀 and if that ever comes, meet me in heaven and lets f*ck like demons.”

Fox: “I think we weren’t allowed to see each other yet. We weren’t supposed to run into each other that night, so our souls, our spirit guides, were luring us away from each other, because you literally had no face, like that thing from Spirited Away. It is hard to see his face in general, but really he had no face that night ... “Thank God, [because] what torture had I known you were there and I couldn’t get to you. It was better that I didn’t know.”

Fox described the first time she saw MGK, at a party in Los Angeles, where she told him he smelled like weed and he said, “I am weed.” Men, do not take notes.

MGK: “Even our first kiss, she wouldn’t kiss me. We just put our lips right in front of each other and breathed each other’s breath and then she just left.”

Okay, this is literally a scene from Twilight.

Fox: "This is a very intense relationship. Our souls chose this to absolutely have to face our shadow selves; to face things about ourselves we didn’t want to have to know, that we tried to push away."

MGK: "It should be light, but also we go to hell with each other. It’s ecstasy and agony for sure... I don’t want people to think anything’s perfect with us. I didn’t say it was the darkest fairy tale for no reason. God help you if you would’ve met us last Saturday."

Love is a wild thing!