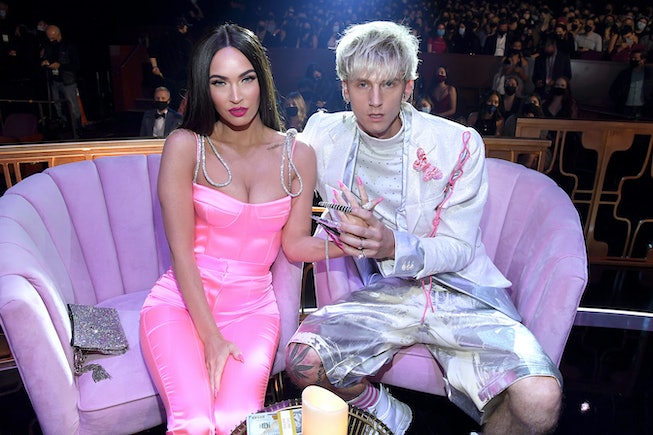 Ever since Megan Fox and Machine Gun Kelly’s high-octane relationship was confirmed in 2020, the famous couple have been stealing the celebrity style spotlight with their very fashionable and almost-always-matching outfits. In an interview with Arsenio Hall as guest host of Jimmy Kimmel Live! on Monday night, Fox revealed that their complementary looks are actually intentional:

“That’s something I started with him because he’s such a flamboyant dresser that I can’t really pull off just the sweatpants and yoga gear anymore. I have to elevate myself to his level because he’s always covered in grommets, zippers, sequins, everything’s pink, everything’s glowing. He’s always coming off a stage show, so I have to match what he’s doing. So we do coordinate often.”

But according to Fox’s stylist, Maeve Reilly, who also works with fellow coupled-up celebs Hailey Bieber and Ciara, their matching outfits are not as over-planned as you would think.

“We all just do our own separate thing and then on the day of the occasion, we make sure it makes sense together, matches in some sort of way,” said Reilly in an interview with InStyle. “But I think it's mostly natural, especially the street style. We're definitely not overcomplicating or coordinating. I think it's just like, if the girl comes out of the room in bright pink and dude comes out in turquoise, someone probably should change, you know what I'm saying?”

Fox also mentioned to Hall that some of MGK’s fashion choices do come with their own consequences, like wearing a pair of pants that might not have pockets. “He had lost his passport riding a motorcycle on the freeway because he wears these insane pants, and he’ll put his passport in his sock and so it’ll fall out, obviously,” she recalls. “That’s a stupid thing, don’t do that.”

Watch the rest of Fox’s interview with Hall on Jimmy Kimmel Live! in the video, below.

NEXT UP
Culture
An Exhaustive Breakdown Of The Balenciaga Controversy
Culture
Lindsay Lohan’s New Style Era Is Sweet Redemption
Culture
Mowalola Teams Up With Bratz For A Daring, High Fashion Collection
Fashion
Reformation & Canada Goose Team Up To Warm You Up