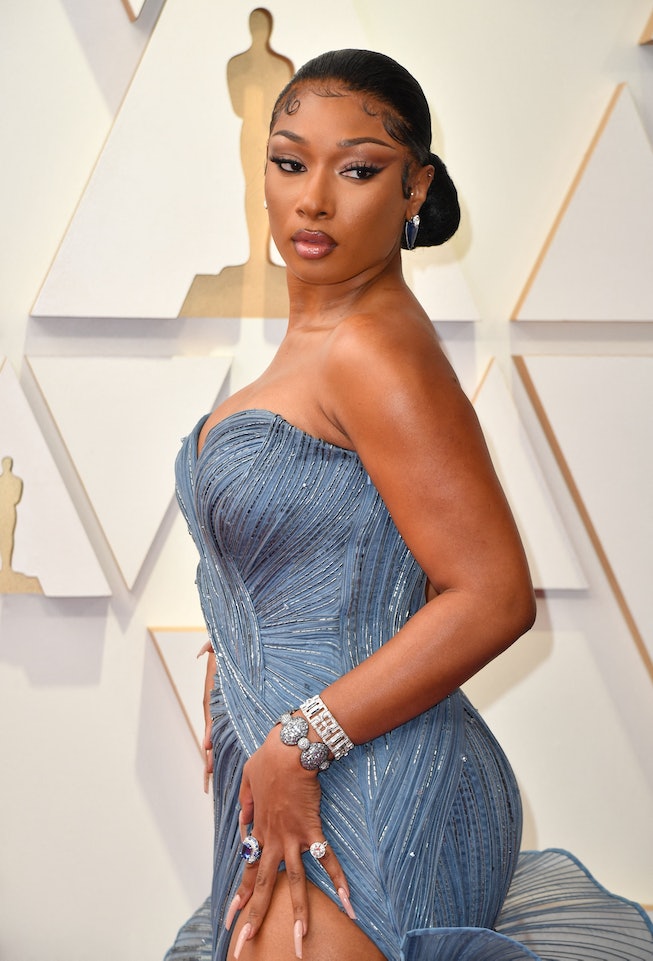 No one puts a red carpet look together quite like Megan Thee Stallion — and the superstar dazzled at the 2022 Oscars in an aquatic blue Gaurav Gupta mermaid gown complete with crystal details, a dramatic ruffled train, and — obviously — a sky-high thigh slit.

It was a grand entrance for the pop star who made her debut at the award ceremony’s red carpet on Sunday. She paired the show-stopping look with more minimal beauty and accessories styling: a sleek bun, neutral makeup, diamond bracelets and rings, and crystal-studded heels.

While the H-town hottie wasn’t nominated for any awards, she will still be taking the stage as part of a special performance of “We Don’t Talk About Bruno” alongside the rest of the Encanto cast, Luis Fonsi, and Becky G. Teasing the performance on the red carpet, Fonsi said, “It’s going to be a party, there’s really no other way to explain it. It’s going to be a very colorful, uptempo Latino party.”

“We Don’t Talk About Bruno” is the unexpected breakout hit from Disney’s Encanto, which is up for three Academy awards including Best Animated Picture, Best Original Song (for “Dos Oruguitas”), and Best Original Score. The song centers around the film’s “villain” character, Bruno, the mysterious and seemingly exiled member of the magical Madrigal family. Though the track performed well shortly after the film’s release in December 2021, it suddenly shot up on the Billboard charts in early 2021, eventually taking the No. 1 slot for many consecutive weeks.

That being said, Encanto’s “Dos Oruguitas” is facing stiff competition in the Best Original Song category, nominated alongside Billie Eilish and Finneas’ “No Time To Die,” Beyoncé and Dixson’s “Be Alive,” Diane Warren’s “Somehow You Do,” and Van Morrison’s “Down To Joy.”

Meanwhile, the self-proclaimed hot girl coach has been having her own very busy couple of weeks, appearing and performing at the recent iHeartAwards show following the release of her newest song, “Sweetest Pie” with Dua Lipa. Starting in April, the star will release Enter Thee Hottieverse, her live-action VR concert, in various theaters across the U.S.

For now, check out the details of Megan Thee Stallion’s 2022 Oscars look from every angle below, and see all of the best red carpet looks here.