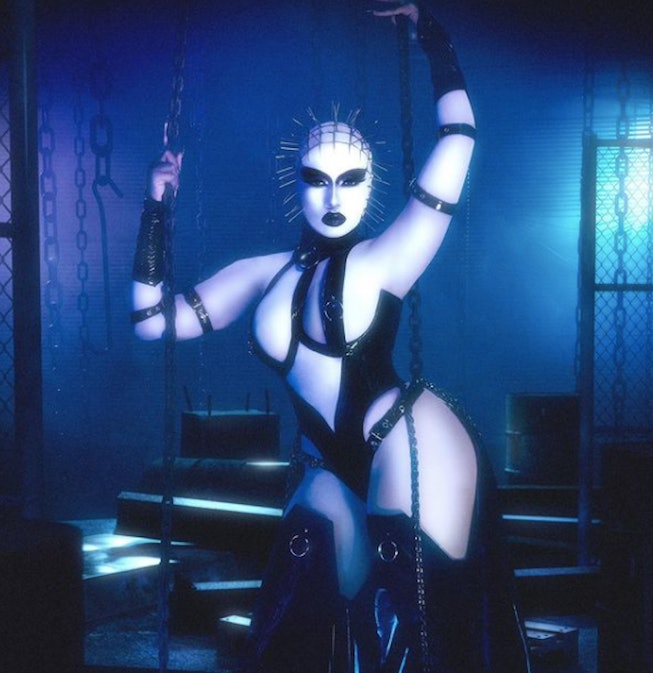 Hot girl summer might be over, but at least we still have Hottiween to look forward to. Certified-platinum rapper Megan Thee Stallion is keeping her extravagant Halloween tradition alive, with another year of thrilling costumes. Last night she nearly broke the internet after posting a photo of herself dressed as a sensual version of Pinhead from the 1987 horror flick, Hellraiser.

The photo shows Meg looking nearly-unrecognizable in white body paint and sultry black makeup. To complete the costume she wore a black-dominatrix suit, paired with thigh-high boots, chains, leather gloves and a braless corset. And to top it off, she traded her long locks for a skullcap with razor-sharp pins sticking out of it.

The rapper posted the photo set with the caption, “Pain has a face. Allow me to show you. Gentleman, I am pain.” Along with the photos she also uploaded a seductive promo-video — still dressed as pinhead of course — to announce this year's festivities. “Ya’ll already know my Hottieween party about to be LIT this year,” she wrote. “I can’t wait to see everyone’s costumes.”

Meg started Hottieween in 2019 as a way to celebrate the holiday with her fans. She threw two huge parties in Los Angeles and Atlanta, inviting people to come out and show off their costumes. The “Savage” rapper also created a mini-horror film, directed by close friend and artist Teyana Taylor, to promote the event, in which she plays a rookie private investigator working to solve a slew of murders conducted by local “fuccbois.”

The rapper hasn’t continued the video series, but her spooky-spirit is alive and well. This year, she’s dropping an album of new music that wasn’t included on her previous records. On Instagram she wrote, “My gift to my hotties 10/29. Freestyles ya’ll have been asking for plus a few unreleased songs from my archives to hold ya’ll over for the rest of the year.”

If she follows tradition, the highly-anticipated mixtape will drop just in-time to be the playlist for her Hottiween event. For the past two years the party has taken place over Halloween Weekend. The rapper has not disclosed the location or ticket details yet, but until then at least we have her Pinhead photos to tide us over.

Megs boyfriend and fellow rap-star Pardison Fontaine (he preforms under the stage name Pardi) summed things up perfectly. Under her costume reveal he wrote, “scary how good you look...even dressed as an acupuncture faced white man.” We couldn’t agree more.